The first time I got a say in the covers for one of my books, I have to admit I was pretty surprised. Until that point I’d seen my involvement in the covers as somewhere between negligible and nonexistent. I wrote the books. Sometimes they were printed under a title I’d picked. And I’d labour to produce blurb and cover copy to go on the back page. But the front cover had always been what Douglas Adams referred to as an SEP (Someone Else’s Problem).

So, whilst I was busy writing the first of my two non-fiction titles on swinging, I was surprised to get a call from my editor, asking what I thought should go on the cover.

He wasn’t impressed. He had an idea for a goldfish bowl full of car keys.

“Why?” I asked. The book was about people having sex. It wasn’t about car keys pretending to be goldfish. That sounded like something from a surreal children’s film.

When the editor explained the relevance of the image I felt pretty foolish. Admittedly, I could have told him that such references implied possessions, indicative of a controlling patriarchal hegemony rather than a progressive attitude toward consensual promiscuity. But there are some phrases that just don’t slip too easy off the tongue.

“What about a near-naked woman?” I suggested. I like near-naked women. Pictures of them, on the covers of books, often make me put my hand in my pocket. Sometimes I’ll bring out my hand holding money so I can buy those books.

“Yeah. Naked, but you can’t see her naughty bits.”

“Naughty bits? You’re not using that phrase in the book, are you?”

I ignored that question. “Her naughty bits are covered up by loads of different hands. Men’s hands. And some women’s hands. Hands that are different colours – to show ethnic diversity and multiculturalism. Hands that are different sizes – to show that it’s lots of different people. The image will give a suggestion of the audacity of sexual promiscuity being concealed by a conspiracy of consenting conservatism. It will be a visually dynamic blend of the sexual and the prudish, with the hands on the flesh concealing rather than caressing.”

“I’ve got a great image of a goldfish bowl with car keys in it. Should I email it over to you?”

“Classified ads. I think classified ads have more pertinence to contemporary swingers than car keys and goldfish bowls. That was certainly the idea I got whilst researching the book. What about an image that looks like it’s been torn from a newspaper’s classified advert section, showing ads with couples looking for couples? We could even draw a red ring around one of the adverts, as though it’s been marked for explicit attention.”

“Can you send a copy of it through?”

“Can you create some classified ads, make them look like they’ve been torn from a newspaper, and draw a red circle around them so I can get an idea about this?”

Ordinarily, I would have said I was busy. But this was an opportunity to create my own cover art. Even though it was just words and a red circle, I was going to be a creative artist. 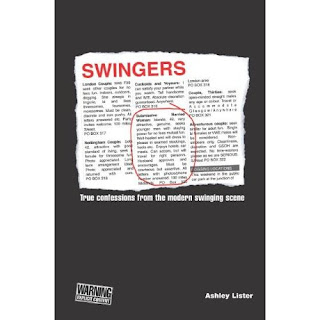 The image didn’t get used. Or, at least, I don’t think it ever got used. The picture above is the one that was linked to the book on Amazon (Canada). Personally, I like its stark simplicity, but then, I do like simple things. I have often been described as a simple person.

Surprisingly, after all our conversations on the subject, the original cover of SWINGERS looked something like this: 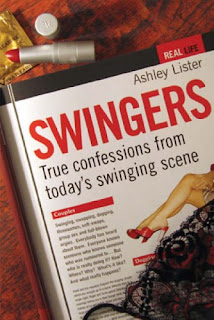 I have to admit, I was perplexed at first. It’s one of those covers that requires some thought or consideration. It’s a book of real life stories, so the picture shows a book of stories (with the words REAL LIFE in the top right hand corner, just so there’s no confusion). There’s something lacy on the bottom right hand corner (knickers? panties? thong?) and, cleverly, in the top left hand corner, there’s a red-ended length of lipstick penetrating the ring-shaped bulge of a sealed condom.

Is it all a subliminal message? The cover could be suggesting: get your knickers off, read some real life stories, and then get ready to slide something (with a bright red end) into a condom.

I have no answers to these questions. I just know that I liked the artwork and was quite pleased they stuck with the same image when the book went into reprint. However, when SWINGERS: Female Confidential went to print, the cover they picked looked like this: 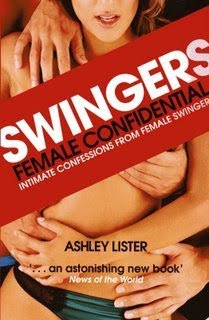 I wonder where that idea came from. Who would have thought they could use an image of a near-naked woman being covered by hands!
Posted by Ashley Lister at 2:24 AM