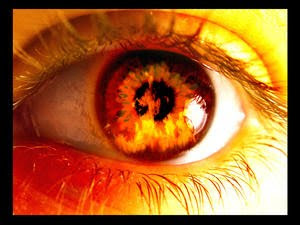 In 1953, the year that I was born, Ray Bradbury published his dystopian novel Fahrenheit 451 . In his fictional world, television reins supreme and books are considered dangerous and subversive. The state maintains crews of “firemen” whose job involves searching out and burning any books they find. Fahrenheit 451 concerns a fireman named Montag who is, in some sense, seduced by the books he is tasked to destroy. He begins by saving volumes from the fire, one at a time, and hiding them in his home. By the end of the novel he is a fugitive taking shelter with dissidents who commit books to memory in order to save their contents for the future.

In his topic for this week, Garce asks us to put ourselves in Montag's place. What book would you save, he asks, if the firemen were knocking at your door? Would it be Shakespeare? The Bible? Plato? The Origin of Species? Catcher in the Rye? Alice in Wonderland?

I've been thinking about this question for weeks, ever since the theme was posted. Finally, I've come to a conclusion. I wouldn't try to save anything.

You may be a bit shocked by this response. I'm an author, aren't I? Don't I love books?

Of course I do. There are only a few things that I care about more deeply. While working on this post, I figured out that I've probably read more than five thousand books during my lifetime. This estimate is based on the fact that I read at least two books a week. I've been reading for fifty odd years. That works out to 5200 books, and that's probably an underestimate, considering the fact that I spent eight years in undergraduate and graduate school where my reading rate was likely quite a bit higher.

I love the excitement of opening the cover of a new book, the breathless approach to the first few paragraphs. What will this story reveal? What emotions will it evoke? What insights will it kindle? I love pulling an old favorite off the shelves, too, leafing through and re-reading, reliving the experience of my first reading or discovering new depths.

Ultimately, though, books are not things. Yes, they take up physical space (way too much!) and have mass, but their importance, their impact, has little to do with this. Books do not really exist until they are read. Their essence lies in the fact that they change the reader.

Books are like food. They exist to be consumed. And to provide nourishment.

A shelf full of volumes means nothing by itself—it is mere potential. Only when I interact with a book does it become valuable and real. In the reading, I may acquire practical knowledge or spiritual wisdom. I may be introduced to foreign vistas or fantastic characters. A book and I have a relationship—maybe lifelong, maybe a one-night stand—and like all relationships, I emerge from the interaction a different person.

This is why I can't choose a single book to save. I'm the sum of those five thousand books with which I've shared my life. Some had more impact than others, but how can I identify which were the crucial volumes, the ones that made me who I am? Every single one had some effect.

Somehow, too, I believe that even if all physical books were burned, they'd live on in us, the readers. That is actually the moral of Bradbury's tale. Destroying physical books does not quench the fire of literature. Humans are story-tellers. We will re-tell the old tales and create new ones for as long as we persist on this planet.

When I moved overseas seven years ago, I rid myself of perhaps eighty percent of my material possessions. It was a painful process, deciding what to discard and what to keep. The sheer weight of my things turned out to be oppressive. In this process, I sold or gave away hundreds of books. Even so, we shipped at least twenty five boxes of books to our new home.

That experience changed me, however. I want to live more lightly from now on, to escape the tyranny of my worldly goods.

I still read constantly, but I hold on to very few of the volumes I consume. After I've read them, I pass them on. I don't need to have them on my bookshelves. They've taken up residence in my mind and heart, where no one can destroy them.