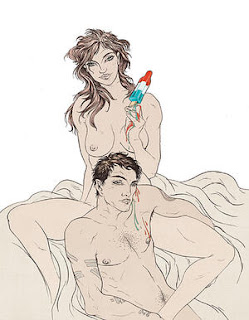 "I am going to tie you to the bed, Colette, unless you tell me to stop. You don't have to be afraid. I've done this many times before."

Jealousy flared up, replacing the fear. Who else had he used the way he was using me?

"So, I'm just another conquest for you?" Ryan looked surprised at my outburst. He sat down beside me on the bed and took my hand.

"No, of course not. You know better than that. You know that you're special."

"I'm sure that you tell every one of your women that."

"But it's true. I knew it the moment I saw you. You have a precious gift, a sexual intensity that you can't hide, though you try. A craving for the extremes of sensation. Overwhelming curiosity and insatiable appetite. The rare ability to surrender completely to pleasure."

His touch was making me weak, but I still tried to resist.

"In the stories, the doms always say that. They know how to push the right buttons. They seduce their victims into thinking that there's something magical and deep about their interaction. When after all, it's just sex -- kinky, perverted, but in the final analysis, just sex."

"Just sex?" Ryan leaped onto the bed, straddling my body, pinning my wrists to the sheets with his huge hands. Then he kissed me with a ferocity that literally took my breath away. His tongue forced its way into my mouth and tangled with mine. He gnawed at my lips, mashing them against my teeth. I tasted blood.

I struggled against him for a moment, then relaxed and let his mouth ravage me. With that release came pleasure so acute that it washed away all thought. I was floating in a sea of pleasure: the tingling in my nipples where his shirt rubbed against them; the sparks flashing across my belly from the pressure of his hidden cock; the exquisite contractions rippling through the depths of my cunt.

I writhed against him, unable to control myself, not caring what he thought or what he did. I opened myself to the pleasure and let it take me away.

Ryan had relinquished my mouth and was peering down at me. His long black hair half-obscured his blazing eyes.

I gasped for breath. "Walt Whitman. Leaves of Grass." The pleasure had subsided somewhat, but I knew that it lay waiting for me to claim it again.

"Yes. 'Books, art, religion, time, the visible and solid earth, the atmosphere and the clouds, and what was expected of heaven or fear'd of hell, are now consumed.' That's what he was talking about, you know. Sex. 'Just' sex."

I nodded. I knew.

"Let me bind you, Colette."

My bed had no hooks, no attachment points. Ryan simply fastened one end of the rope around my wrist, then threaded it under the bed and up the other side to wrap my other wrist. My ankles he secured in a similar manner. Simple and efficient. I lay quietly, feeling the pleasure trembling beneath the surface whenever he touched me.

Before long he stood over me. I assumed that he was admiring his handiwork.

I had imagined this, but the reality was far more intense. I was helpless, unable to move or escape. Truly in his power. My body was displayed, shameless, available for him to use in any way he desired. I have never been more frightened. Or more excited.


The story quoted above is very personal. While the characters and the action are imagined, the central question in “Body Electric” is one that I've considered many times during my five-odd decades. I've had some sexual experiences that could only be called transcendent. They overwhelmed me. They changed me forever. What does that mean? How can I reconcile this fact with the popular wisdom that desire and sexual pleasure are somehow lesser experiences than “love”? The notion that sex is something basic, primitive, animal, and instinctive, whereas love is an expression of humanity's higher nature?

In my wilder days, I had – I was about to write “many lovers”, but I realize that description will mean different things to different people. So instead I'll say “multiple lovers” and leave you to interpret that as you will. With one or two exceptions that still leave a bad taste in my mouth, I felt that I loved them all. Even with the occasional one-night stands, there was tenderness and warmth. As for the person who introduced me to BDSM—well, I still call him my lover and my master, more than thirty years later, despite the fact that I'm twenty seven years married (to someone else) and we haven't shared a “scene” in almost that long. I love him dearly. Did the lust and excitement transmute to love? Did I have to love him first, in order to trust him the way I did, the very first time we were naked together?

Is there an answer to this question, any more than there's one to Walt Whitman's? “And if the body were not the Soul, what is the Soul?”

Some erotica authors can write about sex without any overt recourse to love. Remittance Girl and Mike Kimera particularly come to mind. Even with these authors, though, sex transforms their characters. Desire is an alchemy that transmutes sweat and semen, saliva and pussy juice, into something rarer, finer, closer to what makes us human. One of those abstracts that we write with implicit capitals. Beauty. Truth.

Sometimes, too, I wonder if I can love someone without feeling, at some level, desire. I was startled to realize, in my late teens, that I not only loved and admired a close girlfriend—I was aroused by her. Parents, siblings, elderly relatives—okay, they don't turn me on. But there's at least a hint of a sexual dimension in most of my other relationships.

Am I abnormal? Confused? Deviant? Maybe. But perhaps not. So many people travel through life deliberately distanced from their sexual selves. They reject their lust as shameful and unworthy. I've never felt that way. That's one reason I can write what I do without blushing or making apologies.

Sex or love, Ashley asked in his topic for this week. As for me, I'll take both, thank you.
Posted by Lisabet Sarai at 6:08 AM