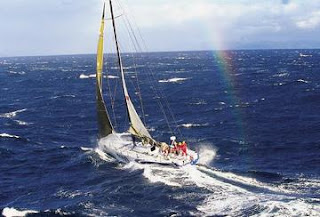 I was a shy, awkward, neurotic eighteen year old, spending the summer working as a camp counselor in Maine. Even now I can remember how lost I felt, completely out of my depth most of the time. One of the older counselors, whom I'll call Marisa, took me under her wing. We got a day off once every two weeks and Marisa invited me to join her and some of her friends, male counselors, for a leisurely Saturday on Casco Bay. They had a sailboat—I have no idea where it came from—and six of us set out under a perfect bowl of blue, a brisk wind freshening our pace as we skimmed the waves and left the land behind.

I've always felt that sailing was the closest thing to flying. The breeze whipping your hair, the tang of salt, the sun baking your bare skin—there's a magic about the sea that I've sensed ever since I was a child, and that day it was stronger than ever. I hardly knew my companions, but they made me feel welcome. One of the guys flirted with me, a black-haired hunk with a beard and a ready smile. His attentions only added to my brimming-over excitement.

As the sun began to set, we gathered in a state park for a barbecue dinner of grilled salmon, potatoes baked in the coals, and plenty of red wine. All my senses were heightened; it was the most delicious meal I'd ever tasted. By the time we drove back to the camp, night had fallen. The woods were fragrant and mysterious. My charges, the nine-years-olds in my cabin, slept soundly. I crawled into my bunk, huddling under the blankets (even in July I found the Maine nights were cold), still buzzed, exhausted with happiness. For a whole day my insecurities had melted away and I had lived only in a glorious present.

Mardi Gras, 1978. My boyfriend, his best friend and I had driven more than 2000 miles in a cramped Honda Civic to experience New Orleans' carnival season. We had no plans. We expected the universe to accommodate us, and miraculously, it did.

We found a church that had opened its doors to visitors and crashed on the floor along with a hundred other seekers of pleasure or inspiration. I remember J. and I waking in the dawn on Fat Tuesday, making love in our sleeping bag, muffling our cries so as not to wake the souls around us. It was February and unseasonably cold, but we didn't mind. The three of us spent hours diving for the beads scattered from the floats. Then we wandered the French Quarter, where all the world seemed to be friends. Yes, we were a bit drunk, along with everyone else—for me, though, the true intoxication was being there, in that mythical place, sharing the joy of carnival with a throng of loving strangers. New Orleans has a reputation for being dangerous and violent, but I've never felt so sheltered and at peace.

That evening, we ate fried oysters in a restaurant jutting out into foggy Lake Ponchatrain and then listened to the blues. As I sat in that crowded bar reeking of beer, with the sawdust on the floor and the dark-skinned players making magic on the stage, I knew that I was where I belonged.


High summer in the Hudson Valley. My husband and I were headed for a Renaissance Faire somewhere near the Shawangunks Mountains. We were both in the best of spirits. Who wouldn't be, on a day with such buttery sunlight and opalescent sky? Cool breezes redolent of growing things dried our sweat as we parked and made our way to the fairgrounds, holding hands.

I was in costume, of a sort, a flowing skirt and a tight, off-the-shoulders blouse that laced up the front. No bra—in those days, I'd often go without, especially since I knew my husband approved. I felt ripe and womanly, a buzz of arousal vibrating in my belly, even before we entered the Faire.

Somehow everything at the Faire struck us as randy and lewd. There were men wearing cod-pieces and women with bodices far more revealing than mine. There was food you ate with your fingers and strong drink, bawdy songs and belly-dancers, half-naked wrestlers and knights with overwhelmingly phallic lances. Men whistled and called me “wench”, teasing me with their eyes and words. My husband found it as entertaining as I did.

We wandered through the lanes of the Renaissance village, moving from holding hands to groping each other. Finally, we made our way back to the car and started along the narrow country road leading away from the Faire. At the first turnout, though, we stopped. There was a path into the woods that we followed to a clearing. And there, on a bed of last autumn's leaves, we finally gave in to our lust. Afterward, I was sticky and sore, with twigs tangled in my hair and bruises from the pebbles under my bum. I was smeared with sap as well other fluids and itchy from the bug bites. While we coupled, though, I was in some sort of physical paradise in which the whole world was aroused along with us.

Snapshots from my life—perfect days, or so they seem in retrospect. I've been fortunate to have many days that came close to ideal. Looking back, I think that what they all had in common was my own attitude of openness. I didn't have expectations. I didn't think, this is what I need to make an ideal day-- I want things to be just so. Instead, I let things happen.


I'm not always so relaxed and willing to experience what the universe offers. When I do let go, however, when I accept the day's patterns rather than trying to force it into my own, bliss is often the result.