Jenna Byrnes and Jude Mason are back with us this weekend as our guest blogger. : )
Jenna: One of my favorite parts of the writing process is choosing a title. Jude might tell you that she agonizes over the process, but I absolutely love it. It’s like when I’m writing a mystery-- I might walk around seemingly normal on the outside, but inside I’m constantly mulling over tiny clues to throw into the story. Finding the perfect title sometimes works like that. I mull it over for hours, days, and occasionally even weeks, until the right name comes to mind.
Jude: Agonizes, she says. Add pulls hair out and whimpers and you may be close. Titles are often very difficult for me. I mull things over, but titles, unfortunately, either come to me out of the blue, or are like pulling teeth.
Jenna: About 75% of the time, I have a title in mind when I start writing. The rest of the time, as I write, a line pops out and I choose it for the title.
Jude: My ratio is a little different. 50% of the time I’ll have a title which leads to the story, or ‘is’ the story. A for instance, I saw Scorpio Tattoo. The title was there, the cover art, and the story, all at the same time. I knew the entire thing within minutes. That happens very rarely, and it’s awesome when it does.
Jenna: There’ve been a handful of manuscripts which were completely finished before the perfect title came to me, and I’ll admit, that bugs me. I like to know my title and I really don’t like ‘working titles’ that get changed after the fact. It’s like waiting until your child is born before you name it, or worse yet, changing the name when the kid is a few days old. *shudders* Not for me.
Jude: This is more the norm for me. (Okay, so my kids were named BEFORE they were born, honest, but the rest fits) Often, I’ll have the story completely done, my edits done and the work sent to Jenna for editing, the title still a complete mystery. She’ll often make suggestions and if I don’t get the title from her, I’ll get an idea. I’ve even had editors help me out with this.
Jenna: A couple times I’ve asked Jude to help me think of a title while she’s proofing a manuscript, and that has worked out well. Another time, a publisher asked me to change a title which she thought wasn’t sexy enough. I won’t say which book that was for, but I still hate the title ultimately chosen. LOL
Jude: Yes, I’ve offered my help a time or two, but this really is one aspect of being an author I’m not truly comfortable with. I distinctly remember saying to my first publisher, ‘you mean I have to come up with the title too?’
When Jenna has come to me about a title, I’ll do my best to offer ideas rather than the title. Sometimes it gives her a jumping off point and I’m thrilled when it happens. I really believe having the correct title, or a title that grabs the readers is one of the most important things. The cover might attract them first, but the title is second.
Jenna: I enjoy using a twist of words to create a title. I used to like using a character’s name, as in Convincing Cate and Switching Seth. Then I started seeing how many authors did that and how many verbs were tortured to come up with titles, so I’m trying to get out of that phase.
Jude: Well, I have always been awed by Jenna’s ability to come up with the perfect title. Titles like Alex’s Appeal and Feral Heat, to name just a couple. I never thought ‘tortured verb’, I did think ‘nice twist.’
Jenna: However it happens, I still love choosing titles. The satisfaction that comes from finding just the perfect one, for a writer, can’t be beat.
Jude: I’m in total agreement. When a title works, it’s magic and people notice. That’s what you want. When a title misleads or misses the mark, it can mean readers will prance on to the next book because they really didn’t ‘get’ what the first was meant to say. For a prolific author it’s more difficult, but it really is important.
They say the cover grabs the reader first. I agree. If you’re in a book store, you may be looking for that author you always buy. But, if you see a splash of color or the hunky guy in just the right pose with just the right props, you’ll stop to at least look. The title has to be right there, ready to snag them. 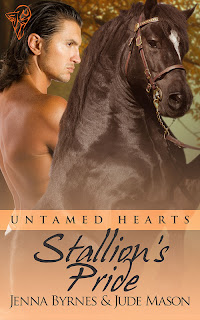 Speaking of titles, we’ve got a couple you might like to check out:
Stallion’s PrideBy Jude Mason and Jenna Byrnes
ISBN: 978-0-85715-058-5
Publisher: Total E-Bound

Purchase here
A recently discovered horse talisman and a gypsy horse changeling tribe seem like the perfect match. Is headstrong Brishen ready for the power the talisman brings?It's a stressful time for the familya of gypsy horse changelings. Shandor, King of the Gypsies, has died, leaving the clans at war and his son, Brishen, struggling with his new-found leadership. Brishen also struggles with something more personal - choosing a life mate. Will it be Tawnie, the female his father selected for him? Or handsome Jal, whose masculine features excite Brishen more than anything has before?In cougar territory, a day's journey away, clan leader Kai and his mate Aric are dealing with an issue of their own. A new talisman discovered - a brilliant purple stone with the head of a horse in gold filigree. Unaware of any horse changelings, Kai calls a meeting of the talisman holders to discuss what should be done.Tarek, leader of the bears, and Cole, ruler of the wolves, come together with Kai to track down their new changeling brothers. When they find the horses and meet young, headstrong Brishen, it's a battle of wills - a battle no one wants to lose.
—— Colt Willing never expected to be a key player in a drug-running operation. Before he can get out, he's determined to release the hold the organization has on Jonathan, the man he's grown to love. Jonathan has ties that bind him to drug-lord Nigel Caprice, and breaking the bonds may prove too difficult for Willing to tackle alone.

Able
By Jude Mason
Detective D.J. Able is determined to bring Caprice to his knees. Backed by his partner, Bryan Stokes, Able and his team are out for justice, and retribution for the loss of one of their own. When push comes to shove, Able discovers that even the best laid plans sometimes go astray, and the men end up in a fight for their very lives.
- - -
*Jude Mason - Come, explore with me…if you dare*
Website: http://www.my-haven2001.com Newsletter: http://groups.yahoo.com/group/Jude_Masons_Newsletter/To join my mailing list, email me: jude.mason AT yahoo.ca
*Jenna Byrnes - Page scorching erotic romance*
Visit my website: http://www.jennabyrnes.com/
Newsletter: http://groups.yahoo.com/group/Jenna_Byrnes_Newsletter/
Posted by Michelle Houston/Houston Michaels at 9:00 AM