On The Road Again

Thanks again to the always-wonderful Lisabet Sarai for giving me another chance to reach out to the readers at the Grip.

This time Lisabet asked me to take a trip, so to speak. It's always odd, when you're a writer, to have a friend look at what you've written and point out ... well, 'things' that you weren't really aware of. For example, I recently learned that I like to start stories at dusk or dawn. That threw me for a loop, as I really had no clue I was doing that. Naturally when I write now I make a point of doing exactly the opposite...

But one thing I was both aware of and not really aware of is my love of traveling. I say aware and not aware because I know I write a lot about it – maybe too much, actually – but not aware because it wasn't until recently that I spent a bit of time roaming my own mind to find out why.

Before I get to that, though, a bit of evidence: Running Dry, my gay vamp novel, is basically a road trip; Me2, my (if I do say so myself) flat-out strange gay thriller, is set maybe far too much going from here to there; and I even co-edited an anthology called The Mammoth Book of Tales of the Road (with my friend Maxim Jakubowksi) featuring everyone from Jack Kerouac to Hunter S. Thompson on the allure of wandering the highways.

Then there's my story, "Wanderlust" that Lisabet particularly pointed out – from my non-smutty science fiction, fantasy, and horror collection Love Without Gun Control. Originally written for an anthology called Graven Images (edited by Nancy Kilpatrick and Thomas Roche), the story – without giving too much away -- is about a perpetual salesman with a very serious affair with the Goddess of Travel ... with some very good, and very bad, repercussions.

That story, I think, more than a lot that I've written really gets to the road and what it means to me. What's odd is that, sure, I've traveled a bit more than most people but compared to others I've barely left my backyard: a few trips to Europe, a year living in Belgium when I was in my early 20s, and then there were the trips I took with my parents – motoring from one end of the country to the other in, believe it or not, a British motor home painted red white and blue.

It wasn't until "Wanderlust" though that I really began to think about why I love to travel, and write about it as well.

This is going to sound weird – or maybe not too weird if you happen to be a writer, musician, painter or any other kind of creative person – but I'm rarely here.

Here has always been ... not as good as somewhere else. I take my immediate world too quickly, it seems: a few glances here and there and (sigh) it seems too ordinary, predictable.

So I look past it all, dreaming about what else may be out there, around the next corner. When I do travel I always drive my companions crazy. They may have plans for a nice, relaxing trip but I'm always the one wandering street after street, turning every corner I see, waiting for the new, the unique, the possibly-wonderful to come into my life.

Even when I read, I try to read a wide range of what's out there, always hoping to discover a new book, or author. The internet, naturally, is a huge part of my life: every day begins with a cup of coffee and going through some thousand or so posts via my RSS reader: each one like walking a strange new street, visiting a new and unexpected land.

Literally (hahaha), travel is an alluring device: how better to show a character's change then to have them go from a geographic point A to point B? True, that's a tad obvious – even amateurish – but as a set design for a story it's still a very dramatic and compelling one.

But traveling is more than just a change in setting, or a way of seeing what's on the other side of the next hill: it also means leaving something behind, putting it behind you. By getting behind the wheel of a car, or boarding a train or airplane you are escaping not just point A but abandoning – for a day, a week, or a lifetime – all that point in space meant to you, and what you were because of it.

When I travel there's always a feeling of possibility – that the Chris walking the streets of that strange, new land is just as different as the landscape: everything is new, everything is fresh -- and so am I.

...and so am I. I've probably written too much about it, but it's too important not to look at. For all of my life I've battled chronic depression, the deep-down and pretty-much constant feeling that I'm less than everyone else. I've taken (and am taking drugs) but it's always there, always in the background.

The road, then, calls and calls and calls: not just to show me things that I never, ever could have imagined – new people, new foods, new ways of thinking, new architecture, new entertainments, new experiences – but a possibility that one of those roads not yet traveled could allow me to travel to a place where I would become a new person, someone not me.

I know, of course, that there is no emotional Shangri-La out there – that the way to finding a happy, sunshine land of candy and joy is through medication and therapy – but that doesn't stop me from looking out the window, at the world I have not seen, and wondering that maybe, perhaps, out there somewhere is a place called happiness and satisfaction.

But until then I get out my maps, fill my tank, adjust my mirror, and set out for places unknown... 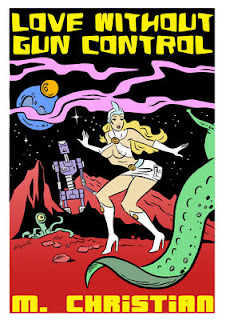 The moan of radials on asphalt; a high-octane, four-stroke, eight cylinder, growl under the hood.

The white line vanishing under, then appearing behind. The near landscape moving fast, far landscape slow. That it was day pines and jagged peaks, blurs of snow, and stoplights swinging in a biting wild. The clouds above were thick and dark, heavily laden with imminent hard rain.

Dancing on his dash, spring-loose hips knocking back and forth with each shimmy and engine knock, she smiled up at him: a beautific image of absolute love in cheap, sun-faded plastic. Every once and a while he found himself looking at her, entranced for a moment by her smile – but most of the time he tried to ignore her, pretend the Mustang’s dash was void of cheap hoola girls.

The road lifted and dropped under him till the sun set, cutting itself on a distant mountain top – bleeding a bright red sunset. Reaching down, he hooked two fingers around a peeling, chrome knob and pulled. High beams stabbed out, revealing a picket line of trees beneath a dark canopy of thick branches and strong needles.

The needle tapped E. Around one corner, a gas station – antique signs lovingly preserved: Gas & Food. Then a restaurant, flashing by his right-hand window – a hospitable glow from within dusky log cabin walls, through thick gingham curtains.

A quick turn, tires only beginning a scream of protest. With his foot on the brake, the exultation of being on the road, of traveling, fell away from him. Stopping felt like a putting on a heavy cloak. Before he opened the door he took a deep breath of mental preparation.

Out and into the station. Dark deco pumps, like drained Coke bottles, under buzzing lamps circled by flights of huge moths. The air was crystal – hard and jagged with cold. Plunging hands deep into leather jacket pockets, he moved across the concrete towards the buzzing neon OFFICE sign.Inside, the place was as familiar as – well, as his home had been, so long ago. It had the usual touches, as regular as the gas in the pumps: jerky and maps, cigarettes and potato chips, lighters and a GIVE can; a guy behind the counter in overalls, backwards gimmie cap, face craggy with exhaust and exhaustion – and with that special grease and spark plug viewpoint they all seemed to have, that special kind of bitterness.

“Howdy,” the gas station man said, “anything I can do you for–?” Then he stopped. Frozen, arrested, his eyes staring wide. He’d been drawn in, completely taken.

“Yeah, I need gas,” he said. As the door closed behind him, he took another deep breath, feeling the soft leather press against his chest.

“Take what you want, please –” the gas man said, his voice soft, cooing like a pigeon. “Anything you want, it’s yours.” It was a tone he had probably never used before, and would never use again. Not a two stroke sound, not a fuel additive sound; it was so sweet it was almost comical.

“Thanks,” he said, turning and walking back out to his car, the pumps. He didn’t laugh.

Dipping the nozzle in and squeezing the handle, he sensed the gas man standing behind him, lingering close by. With another breath, tired this time, he turned to look at him.

He turned completely, to look at him directly. Sometimes he just walked away, or drove off – feeling bitter guilt for a few miles. Tonight, though, he felt a pitiful affection for the man. “For the gas,” he said, kissing him on his chapped lips, listening to his little sigh, his pathetic moan of ecstatic release.

Then, towards the restaurant. Suddenly, the wind surrounded him, nipping at his exposed skin, howling with feral glee – carrying away most, but not all, of the gas man’s sobbing, beatific joy.

He hoped it wasn’t crowded. He prayed it wasn’t crowded. The door was heavy, halved logs again, but pushed open easily. Inside it was warm, comfortable, like burying under many layers of blankets. Maybe a dozen tables, a dark jukebox, red and white checkered table cloths, little electric lamps at each table, stuffed moose on one stuffed moose on one wall, antlers on the others. From the back, the clatter and bang of a busy kitchen....

Imagination is intelligence with an erection: http://zobop.blogspot.com