Pride is a sneaky thing. It doesn't seem dangerous-- not at all. That warm, confident feeling radiating from somewhere deep inside, it makes you feel good. It makes me feel good. Maybe because it doesn't happen that often, feeling proud. Don't get me wrong, I'm not down on myself. Not at all. I know my accomplishments and my abilities-- and I also know my flaws and my limitations. Balanced against each other, they tend to rule out pride. Most of the time.

Earlier this week, I was in New York City for BookExpo America. It's kind of a big deal in the publishing industry-- a convention to promote books and authors and the publishing industry. To celebrate the written word. And this year, I was there. Not as a reader (which I am) or a book blogger or a librarian (though I've worked in a library) or a member of the media-- I was there as an author/anthologist to sign copies of my books for all those other people who attended the convention.

As I said, I'm all too aware of my accomplishments and that I'm very, very lucky to sit where I sit right now-- published and contracted, writing and editing. If the money's not what I'd like-- and not yet enough to make a real living, who am I to complain? After all, I'm doing my dream job-- and the dream job of thousands of others who don't have those other things already-- who aren't published, who aren't contracted, who don't have time/energy/motivation to write and edit. I'm lucky, yes. And I'm proud of where I am.

So yes, I was proud to be attending BEA as a published author. I felt like I belonged there. I felt like someone-- not Someone with a capital S, like some of the authors who attend BEA and have lines queued up an hour before their signings-- but someone legitimate in the publishing industry. I had that warm, confident feeling in me, wearing that BEA badge and signing books and seeing my fall anthology cover hanging in my publisher's booth. 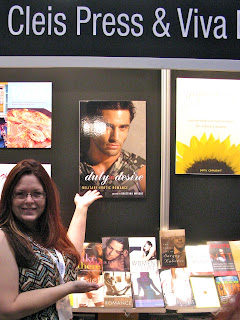 Of course, there's nothing like the biggest event in publishing to take me down a few notches. In between readings, I meandered through the Javits Center-- a cavernous convention center where it's easy to get lost-- and saw all the other authors who also belonged there. Many of them names I recognized. Most of them better published, some of them with books in hardcover from major New York publishers. I was at the same event as some of the biggest names in publishing-- and some of my longtime idols-- but that's all I was: at the same event. I wasn't one of them. In some cases, I couldn't get anywhere near the authors I adore for the crowds that surrounded them. I realized that for all my pride, I was still on the fringes of success. Success being defined in the traditional sense here: the hardcover book, the line of fans around the block, the six figure advance. I realize success can be measured in a variety of ways, but in the case of BEA, that's the kind of success I mean. Not only do I not have that kind of success, I may never have it. That took some of the wind out of my sails as I found my way back to the hotel hours later.

I can't say I lost all sense of pride-- after all, I was there as an author and that's still significant enough to be proud of the milestone. But being in that building and seeing all of those names made me realize I have a long way to go to justify the kind of pride I had been feeling in the days leading up to BEA. Sure, I belonged there. We all did. But I've only begun to achieve my publishing goals-- and I've only just begun to hit the level of productivity I want to be at-- and I have no idea if I can or will sustain it. And pride, that warm fuzzy feeling of accomplishment, gets in the way of productivity. It makes me lazy and complacent. It lets me rest on my laurels and float along on my accomplishments to this point without thinking too hard about what comes next. Bottom line: I spent time worrying about what to wear and whether I had enough business cards when I should've been writing.

BEA was a worthwhile event for me, despite the time (and money) suck. I met some of my favorite authors (and saw some from a distance and), learned some things about the publishing industry and chatted with book lovers of all stripes. I got my name out there with a few more people in the industry, which is always a good thing. So yes, it was absolutely worth attending (even if NYC is crazy expensive) and I plan to go again next year, now that I have a better idea what to expect and how to manage my time. But the book expo was just a blip on my publishing career radar-- a brief moment in time when I got to bask in the glow of my modest success and realize how far I still have to go.

I won't let pride get in my way.
Posted by Kristina Wright at 12:00 AM