Off with the Fairies


I'm glad J.P. Bowie mentioned pantomime earlier this week. I can riff on that.

Because my Sweet talks about pantomimes once in a while.  Her take is that you can't really pull off panto the same way they could back in the day, because children's sense of humour is too sophisticated.  Used to be that the adults were the only ones laughing at the dirty jokes.  Now kids have enough exposure that they understand innuendo.

I don't know if that's true, but it's never the point of Sweet's story. She tells me about the seventies, when her kids were growing up and kids in general were still naive enough that pantomimes didn't raise parents' hackles.  Her daughter's drama group put on a pantomime one year, and asked if any of the dads would take on the Dame role. Sweet jumped at the opportunity.

So, I should probably mention that my girlfriend still identified as a man in the seventies.  She'd been cross-dressing secretly since childhood, but the word "transgender" wouldn't pop up on her radar until the 1990s.  Hearing that word for the first time, and learning its implications, would become a Eureka moment.

But I'm getting ahead of myself.  Let's stick with the seventies.

See, when Sweet performed in pantomime, that was the only time she got to be herself in public.  Sure, she was basically a joke, but she didn't care.  If the trade-off was that she had to be the butt of a joke in order to wear a skirt in public... well, she was willing to laugh along.

A lot has changed in the past... holy fuck, was the seventies forty years ago?  Anyway, my girlfriend identifies as a transsexual woman now (though she's still very closeted where her family's concerned) and she shies away from any behaviour that might call her gender into question.

Sweet's stories about the progression of her identity from cross-dresser to questioning to trans have fueled my fiction for years (with her enthusiastic blessing, of course).  It seems flighty for a grounded person like me to consider any other human my muse, but her history has certainly inspired a lot of my work.

To bring this post back to the fairy realm, I'll mention two titles that showcase the breadth this genre can encompass:

On the flip side, there's another fairy story--actually, a story about fairies--Secrets of the Solstice Sacrifice, which is set long, long ago in a mythical Welsh village.  Trysta is a mixed-roots fairy with a "female problem" she hasn't fully disclosed to her supportive caru Bedwyn.  Her anatomy doesn't quite match her heart. Trysta's only 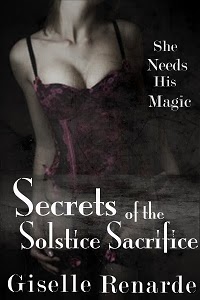 hope to transform her body lies with Professor Selyf, the solitary magical who falls instantly in love with her.  And it's a good thing they're both drawn to each other, because the only way route to transformation is a sexual sacrifice on the solstice...

My brain is shutting down at the moment, so instead of saying something deep and meaningful I'm just going to post an excerpt from Secrets of the Solstice Sacrifice:

Wrapping her arms around his neck, she ensnared him in a kiss the likes of which he’d never imagined. He felt her veiled passion coursing through his veins as his mouth melded with hers.

Their tongues fought and surged, one against the other. His whole body was so rapt with hers he could hardly breathe. As they kissed, he ran intrepid fingers through her silken hair and down her back. In turn, she held his cheeks and his neck, his back and his sides. When he grasped the firm flesh of her buttocks, Trysta wheezed and broke free.

The look in her eyes was indiscernible but for the temptation it aroused. He almost apologized for being so dreadfully forward before realizing it was she who’d kissed him.

Grabbing her wrists, he pulled her into his arms and carried forth the sweet embrace she’d abandoned. After a moment of brave indecision, she gave in to the kiss and melted in Selyf’s arms. His tongue wrangled hers until she broke away once more.

Pressing her soft lips to his ear, she whispered, “I’ve never felt like this before.”

“Neither have I,” he admitted. “You’ve aroused in me the sleeping serpent.”

At that turn of phrase, her body grew limp in his arms.