Once Upon A Time

Do not believe what you hear of me. It was not to preserve my chastity that I was imprisoned here, in this amusingly phallic tower with its sealed entrance and single window. I have not been a virgin for years; even my father knows that. In the cesspit of hypocrisy that is his court, no one cares what goes on behind closed doors. Only appearances matter.

And appearances are what landed me here in this unorthodox prison. I'm confined to this aerie because despite all blandishments and threats, I refused to cut my hair.

In a society like ours, valuing external neatness and order above else, my wild auburn locks are an offense to public decency, or so my royal parents would like me to believe. My father's crown rests upon a bald pate, shaved daily. My mother and sisters wear pale helmets of curls that are clipped back whenever they grow beyond the earlobes. Every proper citizen plucks, trims, waxes and shaves to eliminate any hint of the hirsute.

Not I. I love my hair, not just the luxurious tresses that flow over my shoulders and down to the floor, but the rest, too: my unfashionably bushy eyebrows, the soft tufts gracing my armpits, the wiry tangle that hides my sex. My hair is a source of my power. My father suspects as much. An ancient prophecy says the kingdom shall one day be lost to a red-haired sorceress and he fears I am the fulfillment of that promise.

He need not worry. I care not for the sort of power he wields. All I want is freedom - to travel the world, to think for myself, to love whom I please. To my father, I am nothing but a bargaining chip in the game of alliances. For that role, my hair diminishes my worth - as do my forthright tongue and legendary temper. I'm pleased to note that I've successfully discouraged every suitor the king attempted to lure into taking me off his hands.

His ambitious majesty sent his minions to my room while I slept, to shear me by force. When one returned with a broken arm, the other soaked with blood from the scissors embedded in his chest, the king decided prison was the only way to deal with the threat posed by my independence. He spread the tale that the servants had been injured fighting off rapists. Under pretext of guarding his beloved daughter from ravishment, he locked me in this lofty turret and sealed the door from the outside. 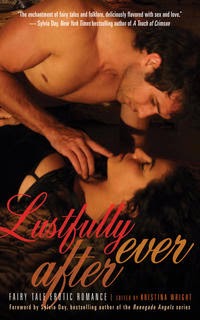 Not so. The original folk stories that we identify as “fairy tales” carried a thread of darkness and violence. The Brothers Grimm deserved their name. In the original fairy tales, evil sometimes prevails – and indeed, the evil might well reside within the hero or heroine as opposed to being externalized in some witch or ogre. Selfishness – stubbornness – laziness – petty cruelty – these are the sort of flaws that lead fairy tale characters to their sorry fates. Even when the protagonist triumphs, he or she is often wounded or diminished in some way. Consider the Little Mermaid, forced to renounce her beloved ocean and to live with the constant pain of walking upon two legs.

I like the original versions a good deal more than the sanitized Andrew Lang/Walt Disney treatments. I find them more honest.

Although I can admire a skillful and arousing twist to an old plot, I'm more impressed by new stories crafted in the fairy tale tradition. Back in 2006, I contributed to an erotic fairy tale anthology edited by Sage Vivant and M. Christian entitled The Garden of the Perverse. I'm not sure my offering, “Cat's Eye”, really managed to capture the peculiar flavor and ethos of a fairy tale world. However, some of the other offerings in that book were incredible. In particular, I loved Remittance Girl's creepy and delicious “Pipe of Thorns” (which you'll also find in her Coming Together Presents volume). In fact her tale is not set in the domain of princesses and dragons, but in a city reminiscent of Victorian London. However, I found the sense of menace, of a dark fate made more or less inescapable by the protagonist's flaws, a perfect fit to my notion of what a fairy tale should be.

I should also mention Jean Roberta's excellent collection Obsession, which features several stories with fairy tale echoes, including a highly transgressive Hansel and Gretel yarn. Maybe she'll share a bit of one of those stories in her post next week!

Meanwhile, I guess I'll leave you with a bit of Cat's Eye, which seems to be the only other fairy tale I've written.

Generally, the village people avoided Nimon. When he was a child, they used to call their own children inside, if he happened down their street. They would peer from behind half-closed doors and whisper among themselves. Now that he was a young man, they greeted him politely, but without warmth. They bought the marvelously clever carvings he hawked from door to door, utensils and ornaments, but no one invited him in to sit by the hearth and share a glass of cider.

With his tawny skin, jet hair and lithe body, he was a handsome man, and prosperous, too, by village standards. Nevertheless the village beauties never assailed him with flirtatious banter, the way that they did the other youths. They stood awkward and quiet, with eyes downcast, until he passed. No father had approached Grandma Moira, with whom he made his home, with offers of a dowry. 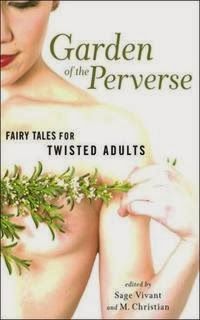 Simple people fear what they do not understand, and no one understood Nimon. The rumors had been repeated and embellished in the nineteen years since his birth. His mother Leileah, a fair virgin of good family, suddenly and inexplicably grew heavy with child. Disobeying her parents for the first time in her life, she refused to reveal the father. And when her time grew near, she shunned the attentions of the midwives, fleeing on her own to the forested hills. A week later she returned with her ebony-haired, green-eyed son.

The village folk, including Nimon's mother, all had hair the color of straw, eyes the color of sky. The babe was strange in other ways, too. He would stare at you for the longest time without blinking, his oval pupils huge and midnight black. His pudgy fingers were tipped with nails much longer and sharper than a normal baby's. He never cried.

After his birth, Leileah became as silent as her child. Her lovely flaxen hair grew long, tangled and unkempt. Her cornflower eyes sparked with madness. Within a month, she left her parents' home, moving into Grandma Moira's big, ramshackle house at the edge of the hills.

Her family pleaded for her to stay. Secretly, though, they were relieved to have their stranger of a daughter out from under their roof. It seemed natural for her to go to Moira, strange drawn to strange. No one saw much of Leileah or Nimon after that. The people normally didn't tend to bother Moira, unless they needed a healing draught for their cows, or a love potion.

When Nimon was two, the wasting sickness came to the village. Nimon's mother died early; her parents followed a few weeks later. Some folk said that Leileah was punished for taking a stranger to her bed, and her parents for rejecting her afterwards. But people always like to talk. In truth, many in the village died; were all of them transgressors?

Still, tales of Nimon's mysterious parentage were always popular around the winter hearth. The father was an Arab prince, some claimed, who had galloped by the village on his white stallion and ravished Leileah as she was working in the fields. Others said that he was the Lord of the Underworld, well-known for ruining innocent virgins and carrying them back to his subterranean kingdom. A forest demon, still others claimed.
Hadn't Leileah fled to woods to give birth? Didn't the child have animal eyes and claws? Then someone would laugh, and change the subject.

So Nimon grew to manhood, orphaned, raised by a wise woman whom most people called crazy, shunned by the village. For the most part, he didn't care what the people thought of him. He roamed the forest, slinking along trails that only he could see, bringing colored stones or wild herbs back to his adoptive mother. He ran through the fields, naked and glorying in his strength, laughing when the girls busy with the planting or the harvest blushed and looked away.

Some nights, though, as he lay on the ground staring up at a ripe moon, he felt a kind of emptiness come upon him. He didn't recall his mother's face, but he remembered her smell, the warm, musky smell of unwashed female skin. It seemed to engulf him on these nights, drowning out the fragrance of honeysuckle and fresh-cut hay. These nights his penis swelled up hard as the oak logs he used for his carving. Touching himself was simultaneously pain and pleasure. He grasped his erection with both hands, squeezing and pummeling his flesh, desperate to release the demons that seemed to be warring inside him.

He remembered the women in the fields, with their skirts tucked up above their knees and their bodices damp with sweat. He tried to imagine them without clothes. But the images of rounded limbs and rosy breasts kept slipping away. Instead he saw only a whirlwind, swirling shards of darkness that circled faster the closer he came to the climax.