A thirty-fifth anniversary looms ahead. Let me be the first one here to mention it. On February 22, 1980 one shot  from the stick of Mike Eruzione changed the course of USA Hockey. It was the deciding score in the defeat of the powerful Russian team —"The Miracle on Ice". It lifted the nation's spirits, which were sorely flagging due to prolonged recession and the helplessness we felt from the endless stalemate over the hostage situation in Iran. Other analysts have said that it rekindled a spirit of American Exceptionalism that ultimately elected Ronald Reagan. I don't know about that one. All I know was that it was played on a Friday afternoon. It was so unlikely that the USA would win that it wasn't broadcast live. 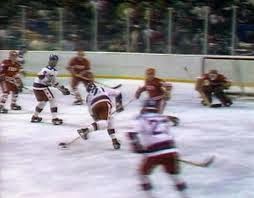 For all the accolades that flowed in the aftermath, fundamentally, it was a terrible shot, and therein lies the lesson. Eruzione was skating backward, his weight was on the wrong foot and he wasn't at a good shooter's angle. The shot itself was a tickler rather than a laser. Analyst Ken Dryden, called it "a good low shot", but the most one could hope for was a rebound from a kick save.  The miracle on ice was that the shot found the back of the net. It should have been a routine save. Eruzione got just enough of a screen from the Russian defenseman that the puck handcuffed the goalie Myshkin. It was behind him before he knew where it was.  And the rest is history.
The immediate lesson of the Eruzione goal is: shoot the puck. Hockey legend Wayne Gretzky, the NHL's all time scoring leader, has said, "The scoring percentage on shots not taken is zero." That simple nostrum is as hard to follow on the ice as off. There's no rejection for a shot not taken.
One of my goals in 2014 has been to shoot the puck - in author's terms, make regular submissions. Throughout 2013 I had built a decent inventory of my male-centric brand of erotic fiction. But they were just sitting there as if awaiting some sort of anointing. I tweaked and tweaked, trying to imagine what I might be missing. I write to entertain myself, but that doesn't mean anyone else will be entertained.  I think I read close to one hundred stories of varying lengths, mostly shorter works, trying to get a feel for what worked. I thought my stuff was better than a lot of what I was reading. Still, I balked.
My hesitancy was due in part to what I was seeing on the market. Actually it was what I wasn't seeing. Except for that cave place that claimed it was for men, there was no publishing house I could find that published male-centric erotic romance. Other male authors in the genre that I found are self-published. I didn't feel ready to go that route. There is a trope in erotic romance of employing a split POV. Part of the book is the man and his thoughts, part is the woman's. Often the only tension is their misunderstanding. I don't like those stories as a reader. My POV is strictly male. Female character's inner workings are revealed only through action and dialogue.
Then  fate intervened. In October of 2013. I had a emergency surgery for a kidney stone too large to pass. I learned what a ten was/is on the pain scale. Let me say in all humility that if men had babies we'd be extinct by now. In the aftermath, I mused that men my age can wake up feeling fine and by five PM they are on a slab at the funeral home or in the nursing home sitting in a wheel chair with a drool cup.
In January of 2014, I turned 64. It was time to jump over the boards and get in the game. I put my fear aside and starting shooting the puck. Three of them have found their way to the net. While Eruzione's little wobbler was a game winner, mine have been anything but. Still, I've learned more about the craft of writing since getting on the score board then I was learning on the bench. Critique groups are good, crit partners are essential, but the true measure of your work comes after it's out there with a cover and can't be hauled back to the bench.
I'm getting better. I'm not really a better writer, but I am becoming a better editor. My stories are often criticized for being too short. I told one commenter that if I knew what to add I would have done it. The stories were the perfect length for me, but not the perfect length for the reading audience who seem to be looking for an elongated emotional experience. I'm working on staying longer in the moment the way Lisabet and Giselle do so well. A few extra lines of dialogue, some additional back story carefully woven in, more descriptive material, drawing out pivotal scenes, adds depth rather than length.
It was only after being published the first time that this whole "author platform" came into my awareness. It's like I have to be the cheerleader, sell tickets, refreshments, clean the toilets, act as sports information director, and play-by-play announcer. I haven't been able to balance the creative and the promotional so I have taken time away from writing new material to build my platform. It's wobbly at this point, like a first time on skates.  I have one more work due out in February then I think I'm going to crawl back into my refrigerator box dwelling and start writing again.

Oh almost forgot. Mike Eruzione recently auctioned the jersey he wore at that game. The winning bid was $657,000. I wonder what the Russian goalie, Myshkin got for his jersey? ( Wait for it...) Not one red cent.
Posted by Unknown at 3:00 AM