As Long as the Topic isn't "Other Talents"


My grandmother is terribly proud of the new kitchen light my uncle installed for her. "He's such a perfectionist," she told me. "But he takes his time. He enjoys the work."

"He could make some extra money as a handyman now that he's retired," my mother said.

"No, no. He'd never do that. If this was a real job with pay and clients, then it would feel like work and he wouldn't want to do it anymore."

Same thing with me and graphic design.

I've mentioned before that cover art was, in my mind, a barrier to entry to the world of self-publishing. I knew I couldn't afford to commission quality cover art, but I also didn't know how to create it myself.

That was a big hurdle, but the less I earned in royalties from small presses, the more I realized I needed to make a change--and self-publishing was the best change for me.

I'm a self-taught cover designer. It's a skill I've acquired by trial and error. I won't say it's a "talent" necessarily, because I know some spectacular graphic designers and my covers really don't stack up.

From time to time, I do commission covers from people I consider "real" graphic designers, but the truth is that I've grown to love playing with my design program. Even after four years using it, I learn something new with every cover I create.

I was an artist, as a kid. Teachers told me I'd grow up to be a writer but I never believed them. I only wrote stories so I could draw pictures to go along with them. Maybe cover art is my adult version of book illustrations.

But there's a reason I don't offer up my skills for cash. There's a reason I gave premade covers away for free in December. And it's the same reason my uncle will only do handiwork around my grandmother's house and his own: once you're working for pay, working for clients, it's a job rather than a pleasure.

I want to retain graphic design as my pleasure. I want to keep learning and keep enjoying.

And I'll tell you one thing: when my lesbian novel The Other Side of Ruth came out in the fall, readers (and writers) came out of the woodwork to tell me how much they loved the cover--a cover I'd designed myself. It made me almost as proud of the cover art as I was of the book itself. 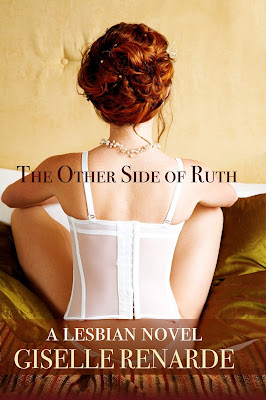 Posted by Giselle Renarde at 1:16 AM