The fun of a "What I'm Reading" topic is that we get glimpses into other people's interests and reading habits.  The downer is that I get exposed as a nerd.

So, let's get the nerd stuff out first!  I'm currently reading four books, the first of which is an epic fantasy novel that a friend has written -- I'm one of his beta readers.  It's really good.  :)

But perhaps the bigger nerd sign hanging over me is the fact that I'm such a Star Trek nerd that I read the books!  Book two that I'm reading this month is Star Trek: Mirror Universe: Rise Like Lions by David Mack.  Even a casual Star Trek fan might remember the episode in the original series where Kirk travelled to a parallel universe and Spock had a beard... right?  Anyway, that parallel universe -- the mirror universe -- has been a fascination of Trek fans for decades, so this is one of a handful of books that explore that universe.

Now, let's move away from the nerdy and toward the sexy.  :)

I've currently got two gay erotica novels on the go.

The first is Two Bottoms in the Ninth by Zavo.

Suspicion starts to mount when someone begins fixing the games, and the question ultimately becomes: what game are they playing with each other? Get ready as the game that often mixes sex and scandal goes into extra innings and there is no telling who will come out on top.

So far, I find the book... well... it's okay.  I was hoping for something a little steamier, something like the non-stop baseball-themed raunch-fest that is Hardball by T. Hitman, which I read a couple years ago and reviewed on my personal blog.

I don't have the book on me right now and can't remember the characters' names... so I guess that tells you how captivated by it I am.  However, what I've come to really enjoy about gay erotica versus M/M erotica is the sheer casualness toward sex.  In general, in gay erotica, if the characters think they want to fuck, they go ahead and fuck.  In general, in M/M erotica, if the characters want to fuck, authors tend to make explicit mention of the usage of a condom, the tenderness of gestures, the intimacy of the moment, and so on.  Sometimes I want a loving and erotic connection, but other times I just want to read about two guys fucking like beasts in the forest.

(Since this novel is set in a "historical" period, AKA pre-HIV, there's no mention of condoms.  In gay erotica, you often won't find mention of condoms or, if you do, it'll be a passing reference and you assume that the characters are being responsible.  In far too many M/M erotica and M/M erotic romance books, I see long-winded dialogue about how using a condom is a sign of respect and love for both partners and they'll use condoms until they both get tested and blah blah blah.  I personally feel that people in real life should use condoms unless they are sure that everyone is of the same status; but I don't need to read a safe-sex lecture in a book I'm reading for pleasure.  Sorry.  That's an ongoing rant of mine.) 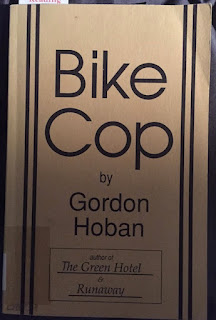 Here's the blurb (which is essentially a two-line excerpt from the book):

"He loved those boots. Though he never admitted it to anyone, those boots were early fuel to his drive to enter the Police Academy."

A while back I discovered that my local LGBT library has a LOT of older erotica, and I've had a blast reading through some of it because those books contain sexual content that you won't find in modern erotica.  At least, not in professionally published modern erotica.  (You might find some of this content in self-published stuff.)

Anyway, back to Bike Cop.  I'm only part-way through, but the main character, a younger guy who just got his first car, is pulled over for speeding and taken into the woods by a cop clad in leather.  They have hot dub-con sex, which sparks the young man's intense fixation on leather (because the cop had shiny leather boots)... leading him to become a leather-clad motorcycle cop.  That's as far as I've read.  I'm expecting a lot of hot leather-themed sex.

I used to read quite rapidly, averaging 60-70 books per year.  However, I know that this year will be a lot slower, as I've got a lot less time on my hands due to an overwhelming amount of projects that demand my time.  I'm hoping that I'll be reading something different the next time this topic comes up.  ;)