I had to debate a little with myself about how to approach this topic. I have a few skills outside of writing, and wasn't sure which one to highlight. There's an obvious choice, which is cover art... but anecdotal evidence suggests I'm known far more AS a cover artist than as a writer, which could arguably suggest writing is one of my "other skills".

So instead, I thought I'd do a little "grab bag". The various other fields in which I flex my creative muscles.

Photo-realistic sketching
While I've not done this for many years, and was essentially untrained (beyond basic high-school art classes), I gained quite a bit of praise for my ability to draw lifelike images from a visual source. Drawing from within my head? Nope. But show me a pic and ask me to draw it and the results tended to be pretty passable. This here is a pic I drew in 1986, of my favorite band, Big Country. 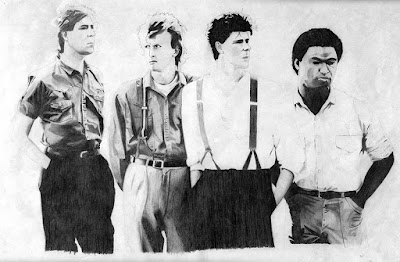 Music
At a reasonably early age I showed a smidgeon of ability on the old electric organ we had in the house. I started out using the light-up method that came built in to the organ, but started experimenting and semi-writing tunes from around the age of 10. Nothing truly came of that, but I started teaching myself guitar at the age of 16, and then began classical guitar lessons at age 17. But it was only when I started playing bass guitar in 1988 that I truly felt I'd come home, and though I've taken breaks in the meantime, and have picked up a couple of other instruments along the way, bass is still the instrument I consider "mine".

Here's a little music video of my band, The Medicine Show, from when we supported Wolfmother back in 2010.


Our other videos can be viewed here, if anyone's interested.

Video Clips / Book Trailers
That previous topic segues beautifully into this one. The video of my band there... I made that! In fact, we have seven music videos, all of which I've made. The first one was back in 2008, and is rather rough-and-ready. I believe the final products have become more polished along the way... in part because I've switched to using stock footage rather than video of our roughed-up heads!

And I've also worked in a field which nicely incorporates pretty much all my skills: book trailers. At first I made simple quickie ones for myself, using supremely basic software and primitive animation. After a short time I bought myself an iMac for cover art, and with it was a piece of software called iMovie, which was far more powerful and flexible than what I'd been limited to.

When I made book trailers, I did the lot in almost every case. The author would supply me some information and I'd write the script for the trailer, source imagery, create frame-by-frame animations in Photoshop, and write and arrange the music. On rare occasions I'd even provide a voice-over, as I did on this trailer. I still feel it's conceptually the strongest trailer I made.

All my other book trailers (including those for now-unpublished books!) can be viewed here, if interested.

Oh, and I'm a reasonably good maker of cryptic crossword puzzles. Y'know, it's just one more thing...
Posted by Willsin Rowe at 9:46 PM