The topic calendar tells me that the next two weeks here at the Grip will be devoted to discussing “Other Skills”. This wasn’t my topic suggestion, but I assume that given we’re all authors, this means “skills other than writing”

We actually had a similar topic back in 2009 (yes, I’ve been posting here at the Grip that long...!). I wrote about my talent for throwing parties. The skill I want to talk about today is a bit more prosaic, namely, my ability to cook.

My mom let me help her cook from the time I was about six. My skills were honed when she was incapacitated for a month by severe pneumonia, a few years later. As the eldest child, I took on the responsibility of putting meals (albeit simple) on the table. I continued cooking, for myself and friends, through high school, college and grad school. Paradoxically, I used to concoct Chinese or Italian dinners even when I was still battling anorexia. I guess I got some sort of vicarious satisfaction out of feeding others.

When I met my DH, I learned that he also enjoyed cooking. His library of cookbooks was larger than mine. I recall the first time he made breakfast for me (after the first full night we spent together): scrambled eggs with tofu and smoked cheddar. Yum!

We pruned our cookbook collection when we moved to Asia. Nevertheless, it still fills a long shelf in our kitchen. I have to admit, though, that I rarely follow a recipe. I’ll skim some of our volumes for ideas, but then I tend to wing it. Even when I’m more or less adhering to someone else’s directions, I’ll almost always make some substitutions or throw in some unusual ingredient.

I call myself an “improvisational cook”. Though I try to keep some fundamental supplies on hand (fresh veggies, lots of garlic, sharp cheddar, almonds, raisins, olives, capers, pasta) and a well-stocked spice rack, I mostly decide what to cook based on what I have in my refrigerator. These days I live a ten minute walk from a 24 hour supermarket, but even when I lived in a rural area and could only shop for groceries once a week, I didn’t do meal plans. Instead, I’d buy a bunch of raw materials, knowing I’d figure out what to do with them later.

Despite my lack of—discipline? Formality? Respect for tradition?— almost everything I cook turns out well. Honestly, I think there must be a cooking gene. My mom was a wonderful cook, as was her mother. Meanwhile, I know people who diligently follow the instructions, who measure everything twice, who would never dare alter the ingredients in a dish, whose results just don’t taste all that good.

There are exceptions, of course. Occasionally my creative disregard for recipes backfires. A few months ago I made Mexican Chile Colorado for a dinner party. Since I couldn’t get the dried Ancho chillies called for by my cookbook, I substituted dried Asian chillies. Bad idea! Even my DH, who can tolerate spicier food than anyone I know, found the results difficult to eat! (The next day, though, with some of the sauce washed off, the meat was delicious.)

At one point, before I’d published any fiction, I contemplated publishing a cookbook called The Improvisational Cook. It was to be part cookbook, part manifesto. Recipe-oppressed women of the world, unite!

That project never got off the ground, but I do have a cookbook I created a few years ago as a holiday gift to readers. Recipes from an International Kitchen was my attempt to actually write down directions for creating some of my favorite (invented) dishes, most of which have some sort of international flavor: Provencal Smoked Salmon Pasta, Bangalore Cauliflower Curry, Heidelburg Hamburg Stroganoff, and so on. I augmented the recipes with photos from my travels. Click the link above to download a copy in PDF. 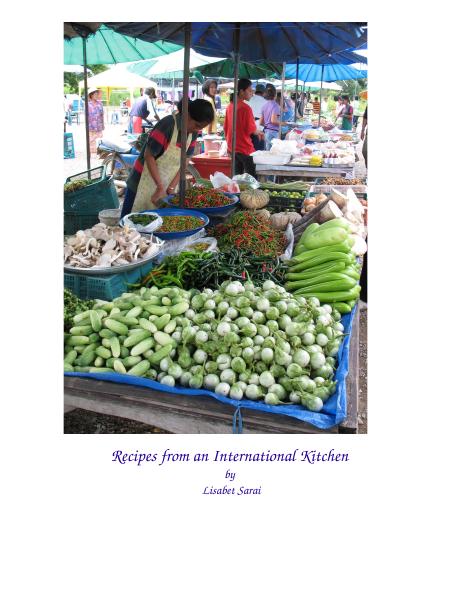 Given my love of concocting scrumptious food, it may not be surprising that some of my characters also show cooking competence. In particular, I like to give my heroes some cooking ability. Here’s a bit from my recent release The Gazillionaire and the Virgin in which Theo is throwing together a quick dinner—very much the way I would:

When I wake up, it’s dark and I’m starving. The mattress rocks as I stand up, but Rachel doesn’t budge. Her succulent breasts rise and fall with her even breathing. I notice the marks from my belt are already fading. I don’t know whether I’m relieved or disappointed.

I pull on a tee shirt and a pair of gym shorts and head for the kitchen. I know I’ve got some chicken breasts in the freezer. With some couscous and a salad, they’ll make a decent supper. Probably not up to Rachel’s standards, but she’ll just have to make allowances.

The damp, rumpled quilt on the dining room table and the ropes scattered over the floor give me a slightly queasy sense of satisfaction. I can hardly believe it happened, but here’s the evidence. I—no, we—actually did it. Can’t tell Dr. Hopkins about this, of course. Although he’s pretty laid back, I suspect there may be limits to his tolerance. No, this will have to be our secret—mine and Rachel’s. My smile’s so broad my cheeks hurt as I coil up the lengths of cord and stash them in a drawer. The emergency release process shortened them, but they still might be useful in the future.

The future. I ponder the possibilities as I putter around the kitchen, putting the chicken into the microwave to thaw, whisking together olive oil, lemon juice, basil and tarragon for the marinade, tearing romaine leaves and slicing vine-ripened tomatoes. Did Rachel and I have a future? Was there any way I could fit into her high-flying, super-charged, billionaire executive life?

We connect sexually. I have no doubts about that, not anymore. Despite her position, or maybe even because of it, she has a natural desire to submit, a desire that I can apparently satisfy. And make no mistake, I’m happy to oblige—to push her to her limits, and beyond. I’ve never felt the kind of power and certainty I felt this afternoon. And that was just the beginning. There are so many things I want to do to her—with her. I’m getting hard again as a parade of X-rated images runs through my mind.

But sex is not enough. Entertaining as it might be to fantasize about a life with Rachel as my 24/7 slave, I know that’s ridiculous. We come from different worlds. We have different values. Rachel measures everything in dollars and cents.

That’s not fair. I arrange the chicken in a baking dish, dump in the marinade, sprinkle chopped garlic over the top, and leave it to sit for ten minutes. From what I’ve seen so far, she also values creativity, innovation and hard work, just like I do. She’s super-smart, energetic, funny. And brave. It took guts for her to take me to Home Depot. I’m sure she realized I might have had a total melt-down. Hey, I almost did.

She’s a lot braver than I am. Would I ever have admitted my interest in kink if she hadn’t found my stash?

Vinegar, oil and Grey Poupon make a quick, tasty salad dressing. Too early to pour it over the greens, though. I put the chicken in the oven, setting the timer for half an hour.

Now the cat’s out of the bag. And she didn’t run away screaming—quite the contrary! It’s pretty likely she’s going to want more.

So now what? She lives almost an hour away, even if there’s no traffic. She runs a billion dollar company. She’s glamorous and self-confident, with a taste for luxury. And me? I’m just a nerdy computer scientist with a touch of Asperger’s and a penchant for bondage. People scare me. Change terrifies me. There’s no way I belong in her universe.

Even if she wants you there? A startling notion. Dr. Rachel Zelinsky always gets what she wants.

The rich aroma of roasting chicken makes my mouth water and my belly clench. The water for the couscous is boiling, so I dump the yellow grains into the pot, cover it and take it off the stove. Time to set the table, then I’ll go wake my guest. I like that notion, actually. I’ve never had a guest for dinner before.

I jump, almost dropping the glass salad bowl. “Jeez! Don’t sneak up on me like that.”

“Sorry.” Rachel extracts the bowl from my grip and places it on the counter, then wraps her arms around me. She’s warm and rumpled and smells of sex. “You must have been lost in thought.” She lands a quick kiss on my lips and gives me a squeeze. “I didn’t know you could cook.”

Okay, so there’s some sex in there, too. Sorry!

I also have a novella (Her Secret Ingredient) and a novel (The Ingredients of Bliss) where the heroine is an ambitious Cordon Bleu chef. Despite Emily Wong’s traditional training, she tends to get creative with classic dishes, much to the chagrin of her French boss:

“Ginger? Do I taste ginger?”

Etienne Duvalier fixed me with a look that would have withered spinach. I straightened my spine, smoothed my apron and attempted a placating smile.

“It’s good, though—isn’t it? One of my signature dishes at Le Belvedere.” It had come out perfectly, the succulent meat melting off the bone at the first touch of a fork. I held out another portion, my own mouth watering at the rich, complex aroma. I wasn’t about to mention the hint of cloves to a traditionalist like Etienne.

Actually, I had great fun with these two books, especially the novel. It’s set mostly in France, and features lots of the amazing food I enjoyed on my last trip to that ultimate gastronomic paradise.

This has gone on much longer than I’d intended. Food is always a favorite topic! I like to fantasize that someday I might be able to host all the Grip contributors at a dinner party. Then you’d understand that I’m not just bragging.

Email ThisBlogThis!Share to TwitterShare to FacebookShare to Pinterest
Labels: cooking, Her Secret Ingredient, improvisation, recipes, skills, The Gazillionaire and the Virgin, The Ingredients of Bliss