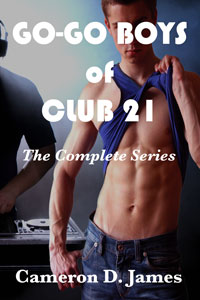 He was a sex-crazed go-go boy in a gay club.  In the first two of the five novellas that make up the series, his scenes were pure sex -- wild, uninhibited, risky sex.  He was the type of guy that would do anything for dick.

By the time I reached the third novella in the series, I felt like Ken needed a twist in his storyline.  To this point, we'd seen him hook-up a couple times with Dan, the slightly-creepy and older bartender who was always hitting on the go-go boys.  Dan was similarly one-dimensional and would also do just about anything for dick.

On a whim, after a hook-up, I wrote a mild hint of emotional connection between these two fuck buddies.  I took it and ran with it in novellas four and five -- and suddenly these two one-dimensional characters blossomed into three-dimensional characters.  They go from sex-crazed men who go on hook-up after hook-up with random men to boyfriends (albeit in a semi-open relationship).  It wasn't a sudden change in characterization that was typical of bad writing -- at least I hope not -- but it was a huge sense of growth and personal development experienced by the characters and that the readers got to follow along with.

While the series started with Ken and Dan being almost throwaway characters who were in the books just to up the sexual content, they very quickly evolved into primary characters who almost competed with the main characters for attention in the series.

The language I used in Ken's scenes was far different than anything I'd done before -- straight to the point, sparse, and an interesting word choice here and there.  He was also in present tense, compared to past tense for the rest of the book.  (Dan's scenes were also in present tense -- this choice was to make their sexy encounters feel more real and in-the-moment.)  But all of that evolved with the character to a slower style, but still punctuated with Ken's almost unusual method of narrating.

Compare his first scene in the series with his last:

The washroom door clatters closed behind me. I admire the hot asses packed in tight denim, lined up along the urinal wall like grocery store merchandise. I saunter to the lone empty urinal at the end, admiring. I’ll have a lick of that, a bite of him, and good God, I’ll bury my face in that one!

I swivel on a heel as I stop at the final urinal and steal a glance at the cock beside me. It’s thick, semi hard, and has a fat, delicious vein snaking up the shaft. It unleashes a golden stream that splatters against porcelain. I look up at him and take in the rest of his gorgeous body. He’s all muscles and body hair and sweat; he is one hundred percent man — exactly what I lust for ... except for his douchey ball cap, but I’ll let that slide.

He notices my stare of seduction and gives me the nod that says, “Game’s on.”

I recognize him from the dance floor. He knows how to use his body, how to move it in all the right ways. I’ve had my eye on him for most of the evening.

Around us, a symphony of flushes and footsteps fill the air, but neither one of us moves until the washroom empties out. Alone. Mmm.

Ball Cap finishes pissing, shakes his cock until it’s dry — and hard. Wide, not too long to take in my mouth, this is gonna be good.

Dan and I say goodbye and head out to his car. We get in and he puts his key in the ignition, but before he can start the car, I grab his shirt and pull him to me, kissing him, shoving my tongue in his mouth. Fuck, I need him. He turns in his seat so he can lean over me, dominating me in the car. Fuck, he’s powerful and it just turns me on all the more.

When our kisses slow and stop, I say to him, “What did you think of tonight?”

“The birthday party?” he says, and I see a fire in his gaze. “It was incredible. You have no idea of the things I want to do to you right now.”

I kiss him again and grope his crotch. He’s hard, thick, and ready to do naughty things to me, I know it. My cock swells at the thought of what that might be.

“I think you should take me home now,” I tell him. “And we can do some of those things you have in mind.”

It was a wild journey with Ken -- and one that Ken noticed in himself.  Below is the moment he comments on this change in himself.  It remains my most favourite line I've ever written for the simple fact that it sound ridiculous, but fits in perfectly with Ken's character and how he's grown.  It's a line that I don't think I could pull off in any other book.