What Your Favourite Sailor Scout Says About You


Here's the thing about Sailor Moon: I'm too old to have loved that show as much as I did.

I was in my late teens when the Japanese anime television series was broadcast on YTV here in Canada.  I had an excuse for watching it: a sister more than a decade my junior.  My siblings and I would flock to the living room and be like, "Oh no, not another kiddie show!" and secretly be thinking, "Yeah, I love Sailor Moon!"

There was something about Sailor Moon that drew us in, drew everyone in.  Everybody related strongly with one character, no doubt because each Sailor Scout represents the astrological characteristics of their associated planet.

While my youngest sister's generation could perform the role of their favourite Sailor Scouts on the playground, those of us approaching adulthood played them out in ways that were closer to real life. In a lot of ways, children's fantasy lives are more well-defined than those of adults. Our fantasies bleed into our everyday lives, sometimes to our detriment. 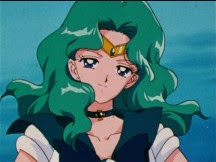 In my last year of high school, I had a friend (whose name escapes me--isn't that awful?) who was all about Sailor Neptune.  I'm not sure how we knew Sailor Neptune was a lesbian, and her girlfriend was Sailor Uranus, but we did. According to Wikipedia: "In the Canadian dub, her relationship with Sailor Uranus was redefined as being cousins."

But everybody knew what was really going on between them.

Granted, I did (still do) own VHS bootleg copies of TWO Sailor Moon movies, both of which escaped the dub. They're Japanese with English subtitles. Maybe that's where my inside information came from. Or maybe it was just that obvious.

Anyway, this friend whose name I can't remember identified so strongly with Sailor Neptune that she dyed her hair green. When I talk about fantasy bleeding into reality, that's where I'm coming from. Not that I'm one to talk. I dyed my hair orange because I was obsessed with Gillian Anderson. Pretty sure all those photographs have been burned. 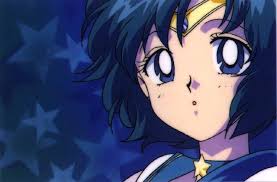 One colour I didn't dye my hair was blue--despite being a die-hard fan of Sailor Mercury.

Ami was my girl. She loved school, just like me.  I wasn't anywhere near as sweet or kind as she was, though.  In fact, looking back, I think a love of studying is all we had in common.

If I re-watched the series today, Sailor Mercury might strike the same chord as an ex-lover.  I'm not sure I'd be gaga over her anymore, but she still holds a special place in my heart.

Before I started writing this blog post, I typed the following into Google:

What your favourite Sailor Scout says about you

There were a surprising number of recent and relevant results, but the one that jumped out at me was an article titled:

Your Inner Sailor Scout Based on Your Myers-Briggs Personality Type

How could I NOT click that? I mean, really!  It's got everything.

I happen to recall, from my one year as a psychology student at the University of Toronto, that I'm an INTJ.  So I scrolled down the page to see which Sailor Scout corresponds to the INTJ personality type.

A quiet assassin, you slash through life like a Space Sword through a block of PC-friendly cheese. You cherish your independence and have few friends – but those few friends are your life. You’ve never been easy to categorize, whether if it’s by your fashion sense, loyalty, or even your gender. You’ve never tried to shock people, but it just seems to happen naturally. You’re just too advanced for us mortal beings, who still can’t say your planetary name without giggling. 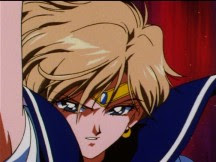 Oh my God, yes! This is me! Independent, inadvertently shocking and genderfucked. Makes me wish I were more familiar with this character.

Moreover, Sailor Uranus is the girlfriend of Sailor Neptune--the hero of my green-haired high school friend. Maybe if I'd been more in touch with Uranus (haha) in high school, I'd have hooked up with that girl.

Imagine how different my life would be. For starters, I'd probably remember her name.

If wishes were horses...
Posted by Giselle Renarde at 1:15 AM