Under my Abi Aiken name, I co-wrote (with Rozlyn Sparks) a trilogy of BDSM Billionaire stories. I’ve mentioned those before on here, I believe. “Submission Therapy”, “Occupational Therapy”, and “Immersion Therapy”. The Aiken & Sparks team also co-wrote a trilogy of professor/student power-play stories, the “Sex Education” series.
Those were both a lot of fun, and it was through the writing of those six stories I came to realize what it is I like about the sexual kind of power play. It’s the mental side of it.
So many jokes are made in mainstream culture about “whips and chains” and “spank me, I’m a bad girl/boy”. That’s all well and good, but of course it’s working with uninformed clichés, and based only on what folks see in passing. And for me, there is an undeniable physical beauty in shibari, for example, but it’s not something I particularly need or want in my life or in my stories.
No, for me, the greatest thrill in power play is the mind game, paired with intimate physical contact. I tend not to write too many toys, tools or accoutrements with any power based stories. When I write them, my focus is almost exclusively on male dominance and female submission (though there is at least one exception), and I truly do envision it much like the creation of art.
My canvas is the skin of her body. My brushes are the hands of her Master. And my inspiration is the meeting of their minds and needs.
Once again in a co-writing situation, I have two short, sharp stories out in a series called Stolen Moments. I’m writing these with the sexy Sassie Lewis, who not only is a dream to work with, she’s also a hottie who I get to see in the flesh almost every week. Sometimes several times.
These stories almost qualify as free-writing. They’re done in two voices (his and hers), and we write them in to-and-fro sections. Literally. One of us will start the story in a Private Message on Facebook, then the other returns fire. Back and forth, back and forth, and all in one session until the story reaches a conclusion.
These babies come out with no set plan, and usually with no setup. It’s raw storytelling, and the editing process is as short and sharp as the writing. We clean up the mistakes and cut away echoes, and there’s not a lot more to it than that. In fact, we have a third complete story written, but we’ve chosen not to publish it, simply because it was forced in the writing process. The raw naturalness was not there, so the work is not reflective of the series.
The Stolen Moments series are basically as they sound… brief encounters between two characters we choose not to name. Are they the same characters in each story? Are they married? And if so, is it to each other or not? These are all scene-setting elements, and integral to the nature of the stories, but the heart of each story is the power differential between the characters, and the way it comes across. 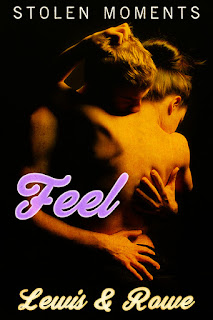 Again, it’s the mental side of power. The fact these two characters know each other intimately. Beyond simply physical intimacy, they understand each other’s weaknesses and strengths, needs and wants.
She has an innate need to submit. To reach an internal nothingness which then facilitates a physical, mental and emotional release, through orgasm. His power comes through in the way he understands that, and her, so deeply. He revels in his own ability to suppress his base wants and needs in order to draw out the session and heighten the pleasure for them both. For example, though he might desperately want to sink his teeth into the ripe flesh of her nipple, he will instead caress that skin with only his breath. It’s the clear need he implies by withholding which intensifies the moment.
Her power manifests in a different way; through her submission. Using that previous example, it will be the way she angles her body to bring his entire focus onto the stiff flesh of her nipple. Placing the temptation before him to see if he can resist. That’s one way she will direct a scene, but not the only one.
Essentially, they both want instant gratification. What they need, though, is to take the scene to a far more potent conclusion. And for these two, it can only be done through the push and pull of temptation and resistance.

From "Need", the second story in the Stolen Moments series: 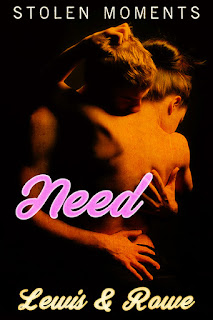 It’s been years since I quit smoking but I still remember what it was like. Those mornings when I’d wake up and light up. The first deep pull on the cigarette would bring my body and mind to life. And it’s like that with her. A kiss is never just a kiss.
She switches from gentle to full force arousal in seconds. The sweet soft caress of her mouth quickly turns to ferocious longing, but for the moment I can't tell who's leading who. All I can feel is the luxury of her gorgeous full-figured body against me. The round solidity of her ass fills my hands, and the ready way she curls those thighs around me as I lift her brings my entire body and soul to life.
The heat of her cunt radiates through the fabric and kisses my cock through my boxer briefs. Damn her. I'm making all the moves, yet she's still fucking driving it. It’s that ancient ballet between the sexes, where she leaves all the right gaps and I fill them like poured water. Everything she does is an invitation. With just her eyes she can pull me from slumber to fully-fledged raging hard-on in a matter of seconds. And with her mouth... oh, god...
She claws my naked back and pulls my hair, and it all hurts but not nearly enough. I need to dive into her, swim across that bountiful flesh, dash myself against every bone in her gorgeous body.
I climb onto my bed, holding her up as I balance on my knees for a moment, before we both crash to the mattress. Her fleshiness is the perfect cushion and my solid weight pushes a sweet moan from inside her.

The first two Stolen Moments books, “Feel” and “Need”, are both available on Amazon, and through Kindle Unlimited.
Posted by Willsin Rowe at 8:29 PM