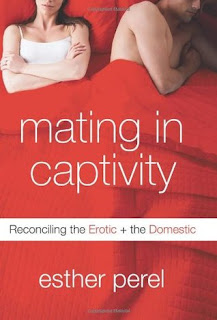 There was a bed, and on the bed was a woman I do actually know, older than me, laying on the bed, on her back, wearing a pajama top of some kind.  I felt a strong desire for her.  I wanted to make passionate love to her, to penetrate her and her mystery.  I hovered over her.  Without my doing, her top was open, in the way of dreams.  First it's this; then it's that.  Her bare chest was revealed to me, an older woman’s chest, but in a kind of half-half, like yin and yang.  One side was slack skinned and wrinkled. The other half was pink and smooth as a young woman’s.  I knelt over her,taking in the sight of her bare chest, with its odd mismatched halves.  Gently, fearfully I settled over her and laid my head on that maternal space between bare breast and bare shoulder where I could hear faintly her heart beating under my ear.  I was afraid.  With each second, more so.  Then suddenly she laid a gentle hand on my back, and pressed me to her.  Her breath rose and fell, and I breathed warmly and gently into her neck, feeling at peace.  I woke up.


Mating in Captivity is about that vulnerable abyss, that fearful moment of anticipation and revelation whether we will be accepted in our need, or pushed away.  I haven't finished the book yet, I’m reading it slowly, finding in each page and case history a fascination with the nature of eroticism revealed.

The book makes the point, several times so far, that what kills the heat in married sex is this conventionality, this doing things by the rules of safety.  Married sex usually becomes what I’ve begun to think of glumly as “Mom and Dad” sex.  Its the last thing before bed.  Its quiet, hidden, because the kids might still be awake, just down the hall.   And then only if you have at all the time or energy.  Initiated by one partner, the other partner glances at the clock on the nightstand.  Then its on to some pattern of foreplay, one of four positions - man on top. Woman on top, side by side, and if one is feeling adventurous maybe a rear entry.  Maybe the lights are on, maybe not, then its a run to the bathroom to wash and off to sleep and up at six.  Getting up early in the morning.  Night after night for years.

The man looks for porn on the internet where he may find what he wishes he could have.  The woman maybe remembers those illicit and wonderful sticky fumblings in the back seat, parked in her parents driveway in early morning hours while her boyfriend labors frantically (”SHHHH!!  My dad will kill me if finds out we’re doing this!”)  And oh - that possibility of dad finding out, of looking up and seeing his shocked face at the rear window your legs are dangling out of, staring at you over your guy's bobbing shoulders - just makes a woman wants to ask - Honey?  What if we did this in the car tonight instead?  Wants to, somehow never does.

The warm touch of her hand on my back, holding me there was as deeply soothing a release as an orgasm.  Maybe better. None of that messy clean up after wards.