As usual, what I’m reading is an odd hodgepodge of things that have struck my recent fancy. Like Giselle, I’ve read some books that weren’t good but pulled me in for mysterious reasons. I don’t like to post publicly about stuff I don’t like, though, so I’ll give you a selection of stuff I’d recommend.

Delusions of Gender: the Real Science Behind Sex Differences
By Cordelia Fine 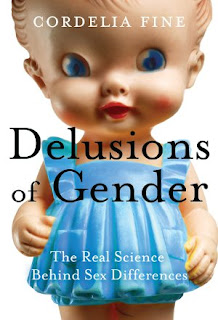 This book methodically, meticulously debunks junk science around supposedly inborn gender differences, but it also offers no easy answers for what gender is. Think of this more as a deconstruction, as an expose of how pervasively we are steered toward “proper” gendered behavior.

Lately, I’ve been exploding my brain by thinking a lot about gender, and this book was a valuable addition to that process. My only complaint is that it doesn’t go much into trans and genderqueer experience, which I think could really shed light on questions about what gender is, what it is to be “masculine” or “feminine,” and so on.

This is really short, but it’s a real treat. It has an early story by N.K. Jemisin, who’s one of the most interesting speculative fiction writers working today. It also has a story by our own Giselle! I didn’t recognize the name of the third writer, Neil Hudson, but his story, which poignantly portrays the agony of a bisexual person who is asked to “choose” is quite moving as well.

I was a bit sad that this book didn’t include any female viewpoint characters. I would have liked reading about some bisexual women. Maybe that’s an excuse for a sequel.

The Room
By Jonas Karlsson 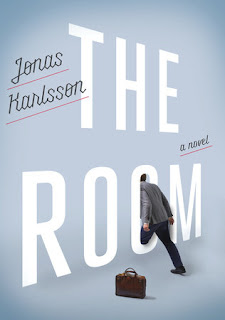 I feel like I am always looking for this sort of book, but rarely find it. It is weird and fascinating, a fast read that stay with you, deceptively simple, strange but still satisfying at the end. The narrator of this book is an unlikeable jerk, and yet I want to know what he has to say.

The plot hinges around a mysterious room that the narrator finds in the office where he works. The room represents beauty, order, and tradition. It’s the only place he can concentrate, and he produces incredible work when he goes in there. The room also seems like it doesn’t exist.

I read this with urgency, though I don’t directly relate to it. I love its spare, clean style. I love the way the reader’s perception of the narrator shifts as the book progresses. I want to know who Jonas Karlsson is (a famous Swedish actor, apparently) and how he came up with this.

The Marketplace
By Laura Antoniou 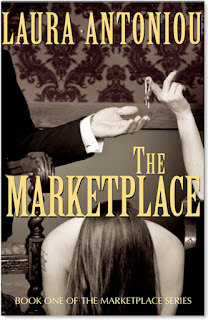 I’ve met Laura Antoniou at a number of events, and have heard her read (she is hilarious!). The Killer Wore Leather is one of my favorite books ever. So I’ve felt weird for a while that I’d never read The Marketplace, which is definitely the work she’s best known for.

Well, I’m happy to report that I’ve now read The Marketplace, and I thought it was just as incredible as I’d always heard. Reading it was a delightful experience, and it was interesting to think about exactly how Antoniou managed that.

First and foremost, in my mind, is that her story is compelling and fascinating. I’ve been thinking a lot about what erotica would look like if we could get it back from always being coupled with romance. The Marketplace offers one very cool possibility. I would describe it as a classic school story, along the lines of Harry Potter. People have to make it through a training process, and the narrative is compelling because the reader is wondering who will succeed and who will fail, and how.

Because the story was so compelling, I never even cared whether the sex was arousing. (Though it often was.) Every sex scene was integral to the plot, entertaining on many axes, arousal being only one of them.

One of the main things I loved about this book was that it was so consistently funny. At other times, however, it brought me to tears.

Also, the characters! Each person is so distinct and well drawn that I think Antoniou could teach a master class in writing, for example, dialogue specific to individuals.

The book was long and took me a while, and I’m resistant to series. Still, I think I’ll eventually get through this one, even though Antoniou seems to be making each book longer as the series goes on. I’m taking a bit of a break, but I expect to dive into the next book, The Slave, within the next couple of months. If the books continue to be this good, I’ll even feel relief that there’s so much more to come.

Black Man in a White Coat: a Doctor’s Reflections on Race and Medicine
By Damon Tweedy 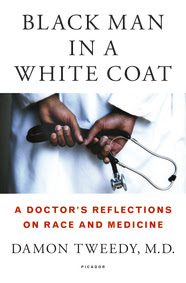 I picked this up expecting a straight memoir, but got something much more interesting. Dr. Tweedy does talk about his own life, but he is the sort of person who takes his experiences into larger philosophical and societal explorations. So a chapter about his experiences treating patients with HIV becomes a chapter that also investigates how stigma around HIV may be encouraging its spread, and a chapter that explores racial disparities in HIV detection and treatment at the societal level.

The voice of the book is so humane and ethical at all times that it gave me a new respect for the medical profession. I can only hope that lots of doctors are asking questions as deeply as Dr. Tweedy, and coming from a place of such genuine desire for self-examination and altruism. Whenever something happens that disturbs him, his instinct seems to be to ask, “Is it my responsibility to change this for the better?” It is heartening to spend time in the company of such a decent man, especially when there is so much ugliness in the world.

I found Dr. Tweedy’s meditations on race particularly valuable because they don’t come to neat conclusions. He embraces uncertainties, exposes complexities, and eschews easy answers. He often made me uncomfortable—for example, a story about his ability to find common ground with a family of white supremacists made me feel queasy on his behalf rather than inspired by the resolution, as I believe the narrative intended. I think, however, that if a discussion of race doesn’t feel uncomfortable, it probably hasn’t gone deep enough.

There was a lot of talk about weight loss, which concerned me because I’ve read a lot about the dubious health benefits of trying to force people to lose weight (interventions often do more harm than whatever good comes from weight loss, and there’s little evidence that any weight loss program is lasting for anything more than a tiny minority of people—for more on this, see, for example, Health at Every Size by Linda Bacon). The weight loss stuff seems endemic to the medical profession, though, so I don’t fault this book too much for focusing on it.

That’s it for now! I’m about to go out of town for a long trip, so I might be scarce in the comment section. See you all soon! :)
Posted by Annabeth Leong at 1:06 AM