The Interrupted Sentence with an Aside 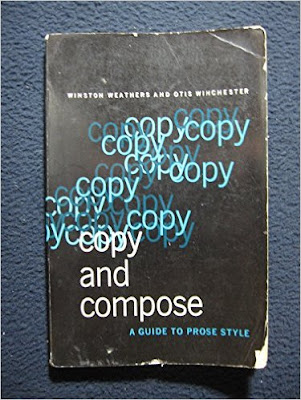 I’m at the Starbucks and its raining outside. I’m using a very old laptop which I like because it has a huge screen and a lot of attitude. Its also prone to conking out.

I’ll be beginning with two elements and an idea. Its a form of writing practice that I do, the way a musician might practice his scales, except that this time I have an idea I’m interested in expanding all the way with. I may even have a writing partner for it.

First element; I choose a writing prompt from the book “A Writers Book of Days” by Judith Reeves. The prompt for June 6 is “You are standing on one side of a closed door”. The second element is a line from an out of print book on prose style called “Copy and Compose” by Winston Weathers. This is a much revered book which appears in PDF files around the Internet. It teaches a forgotten writing exercise that was once taught in public schools called “pastiche”.

The idea of pastiche is to take a well crafted sentence or paragraph from a classic work of literature or any piece of prose or poetry that knocks you on your ass - and hand copy it over and over until you feel that sound, that vibe and then try your own variation of it to get a feel for the nuances of language.

Looking at where I left off yesterday the sentence example for today is “Interrupted Sentence with an Aside”. The example is by F L Lucas from “Style” and goes “Even mathematical solutions (though here I speak with trembling) can have aesthetic beauty.”

So my challenge is to take those two elements and mix them together in a context. What context?

I unwrap my pack of Biscoff cookies, take a swig of coffee.

Standing outside the closed door of her half lidded eyes he had no clue what she was thinking. Was she dissolved in her last wave of pleasure (she claimed to have orgasmed, but she always said that) and he hadn’t felt that special vaginal hug that confirmed - or reassured - his male prowess. Or was she silently judging him?

After all this time, he thought, I don’t know her. Fucking doesn’t tell you anything, not like people think. How to change that?  Punch through that smug wall?

It was the best he’d come for a long time. This because this familiar woman under him, with her familiar breasts, familiar skin, and the familiar warm press of her scalding hot belly squeezed under his rough thrusts, his tensing and his harsh grunt of release (all of this so very, very familiar) was different this time because it was noonday and a surprise and not the last thing before bed, and her eyes were so much the eyes of a stranger across the bed, looking up with that languid gaze.

“Gotta talk - oh. Fuck,” he said as one last, thick little burst wriggled gorgeously up the length of his cock and spurted into the condom impaled deep into the slick raw of her. It was endless, his orgasm. “Bitch,” he heard himself mumble, sounding drunk. “Gotta talk while I still got my dick up in your cunt.” He had never talked this way before (and why not? he thought), and he enjoyed the wrinkle of her brows, in fear or maybe disgust, but he had her attention.

He realized, to his surprise, he hoped it might be fear. Could he make her fear?

She said nothing. Opened her eyes a little wider. No longer in her pleasure but waiting for something, something.

He leaned into her, pressing his still rigid cock as deep as he could make it go, letting himself hang in the moment of belly on belly, hair meshed with hair, keeping that swooning, fat, snug moment for himself. “Fuck,” he said again, as if he couldn’t

My cell phone on the little chair next to my book bag rings.

“I just had my first car wreck.”

He tells me where he is. He needs a ride. I tell him I’m on the way. Suddenly my story, which seemed to be going so great guns a minute ago recedes into the background as Life in all its implacable indifference to my genius puts its hairy hand on my shoulder. All those words sound dumb to me.

I begin packing it all up. Its a good thing I’m not earning a living with this stuff . . . .