Don't You Savage Me


Since our topic is charity and it's too hot to think, I'll cut to the chase and tell you about a charity anthology that's particularly relevant this week.

It was announced yesterday that there will be an inquiry into the staggering number of missing and murdered Indigenous women and girls here in Canada. We're looking at systemic racism and the lasting influence of colonization, and we're seeing disproportionate numbers of Indigenous women disappear. They're the reason I put together my anthology Don't You Savage Me: to get readers thinking and talking about social issues while simultaneously raising money for charitable organizations that serve Aboriginal women. 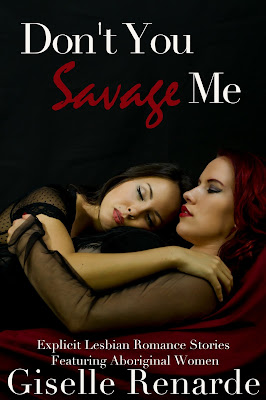 
In “Don’t You Savage Me,” bestselling author of the Rainbow Award-winning novel The Red Satin Collection has bundled together six lesbian love stories featuring Indigenous characters.

There’s a little something for every taste, from the sticky-sweet romance between a cop and the girl next door in “Cuff Divers” to the intense heat of “Sugar Bush.” Rusidan learns about her girlfriend’s heritage in “Traditional Inuit Throat Singing” while Emma encounters a legend come to life in the historical romance “To Dream of Her True Love’s face.” A group of girls leave Jansey utterly exhausted in the charming bondage story “Knowing the Ropes.” Charm or no charm, Dina can’t resist rodeo rider Leslie Goosemoon in “Leslie Goosemoon Rides Again.”

All royalties earned by the author on sales of “Don’t You Savage Me” will be donated to charitable organizations allied with Indigenous women in Canada.


If ever you have the opportunity to witness first-hand the magnificent spectacle that is Inuit throat-singing, don’t pass it by. There is nothing on this planet so cosmically beautiful. Those are the words that kept running through Rusidan’s head as she watched the show.

On an outdoor stage stood two young women with nothing but a microphone between them. Gripping one another, hands on forearms, they cuddled so close their faces nearly touched. They sang a capella and needed no accompaniment. One began before the other, producing a breathy sound. Lower than low, like a sub-sonic pant, the beat of her chant pushed forward like a freight train. How could a female voice produce tones so deeply resonant?

Her partner joined in, filling the gaps. The second starter vocalized at a higher pitch, singing in fleeting, orgasmic sounds. It was like nothing she’d ever heard in popular music. The effect was intriguing, transfixing, visceral. It resonated in the core of Rusidan’s being.

Rhythmic vibrations rumbled her body like the bass line at a rock concert. Who’d have thought throat-singing could be such a turn-on? Sexual and spiritual, it was the sound of divine union.

Those women must have been romantic partners, Rusidan thought. The way they focused on one another, with their faces so close they could kiss, gave them away. They rocked one another’s bodies, pushing and pulling outstretched arms along with the music. They danced to the very song they created. It was stunning. Beyond stunning. It was spellbinding.

With a burst of laughter, they broke away from each other. The second partner giggled, giving the first a playful push as if to deny their beautiful act had ever taken place. Throat-singing represented pure female sensuality, to Rusidan. It seemed almost tawdry that she should witness their show of intimacy.


Here are a few purchase links for Don't You Savage Me. It's available at waaay more retailers than this, so if you've got a go-to ebookstore, search for it there (they probably carry it). If you get your books at a bookstore or library, ask them to order a copy.