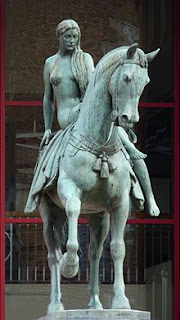 Back in the day when national governments apparently didn’t care whether their citizens lived well or starved to death, charity was dispensed by upper-class ladies. The wife of the local lord, baron, or captain of industry was supposed to be his softer side, the one who shared some of his wealth with the poor (which he or his ancestors had gained by exploiting them in the first place) or who raised funds from other members of her class to distribute to the needy.

As late as the 1970s, charity organizations such as the Cancer Research Campaign in Britain (which had a royal patron, a cousin of the Queen) depended largely on “house-to-house” campaigns run by upper-class women, who also made private donations. I know these were tax-deductible, because I worked as a clerk (pronounced “clark”) in the London office of the Campaign from December 1973 to August 1974. Clerks were expected to attend the Annual General Meeting, which convened in a large hall. If memory serves me, every single lady arrived wearing a colourful spring hat which distinguished them all from us, the bare-headed peasant girls. Viewed from the ceiling, the hall would have looked like a flower garden.

This brings me to an old story about charity as a response to the suffering of the poor, and female nudity as a cause of shame and lust, or courage and power.

Here is what historians say about Lady Godiva:

Staggering beneath the yoke of oppressive taxes, the medieval residents of Coventry, England, pleaded in vain for relief. Ironically, deliverance would come from the wife of the very lord who scorned their pleas. Lady Godiva repeatedly urged her husband, Leofric, to lessen the people's tax burden, and time and again he refused. Yet she persisted, and one day in exasperation he told her he would lower taxes when she rode a horse, naked, through the streets of the town at midday. When she took him at his word and set out on her famous ride, the highborn Lady Godiva became an instant heroine to the common people of Coventry.

A fascinating piece of history. But as it happens, most medieval scholars agree the ride never took place. Professor of English and American literature and language Daniel Donoghue examines the origins and cultural significance of the myth in Lady Godiva: A Literary History of the Legend (Blackwell), and offers insights into how that myth has evolved over the centuries. "The story," he notes, "was based on the life of Godifu, a real woman who lived in Coventry in the latter part of the eleventh century [1000s] and was married to one of the most powerful men in England."

Donoghue points out that "two centuries after her death, chroniclers in the Benedictine abbey of St. Albans inserted a fully developed narrative into their Latin histories" and the legend of Lady Godiva was born. "Nobody knows quite why the legend was invented and attached to her name," he says, "but it does seem to function as a kind of myth of origin for the town of Coventry. At the end, Count Leofric seals the agreement about taxes with his own seal."

One of the myth's most interesting subplots involves the role of "Peeping Tom," who doesn't even appear in the story until the seventeenth century. According to legend, the people of Coventry, as a gesture of respect and appreciation for Lady Godiva's actions on their behalf, stayed indoors behind shuttered windows to preserve her modesty as she passed. Everyone, that is, except Tom, whose lustful curiosity compelled him to gaze at her and who was then, according to legend, punished with blindness or death.

Ha. If Lady Godiva’s ride really took place, I bet more than one townsperson would sneak a peek. Whether the story has any roots in reality or not, it has inspired many sketches and paintings, including one black-and-white reproduction of an engraving that was used by a hair-products company in the 1960s, when I was a teenager. By sending in a bar code from a can of hairspray and a fee for shipping and handling ($1.00, I think), I was able to get a copy of the picture, which I framed and hung on my wall. Nudity for a good cause! I was entranced.

According to some theories, Leofric’s ultimatum to his wife involved “riding a horse naked,” meaning that the horse couldn’t be equipped with any tack (saddle, bridle, reins) whatsoever. And according to some, the lady was simply challenged to ride through the town in clothing below her station, not dressed as the woman with the highest rank in the town.

A more intriguing theory suggests that in the eleventh century, Coventry still had some pagan (pre-Christian) traditions, including ceremonies featuring a local woman representing the Goddess, who would be skyclad (naked) because in ancient Celtic spiritual traditions, nudity was associated with power rather than shame or humiliation. Who better to represent the Goddess than the highest lady of the land?

Leofric’s power to tax the peasants into dire poverty has also been questioned. When the Norman French conquered England in 1066, they did a general survey of their new territory, and eventually imposed more patriarchal legal forms of property ownership than the Anglo-Saxons had previously. Under Anglo-Saxon law, Lady Godiva might have had the power to impose taxes herself, or to lessen them.

Even still, I admired the legendary version of Lady Godiva from the time I first heard of her. Riding naked through the town sounds deliciously comfortable, especially for someone who would normally be expected to wear a lot of clothes. And what other medieval woman was able to do that and still maintain the respect of the people? Her willingness to meet her husband’s challenge (which seems intended to shut her up about the tax situation) suggests sexual generosity, and in the legend, it results in greater happiness for all.

I wonder if I could strike a deal with the city government as an alternative to paying property tax, or with Revenue Canada in lieu of income tax? Alas, probably not at my age.
------------- 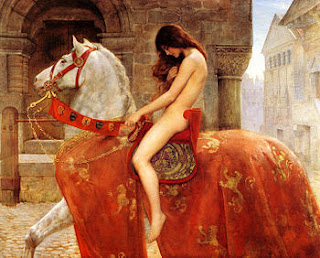 A late nineteenth-century painting by John Collier, who apparently thought the horse should be well-dressed


Here is a link to Peter and Gordon's jolly 1966 song about Lady Godiva: