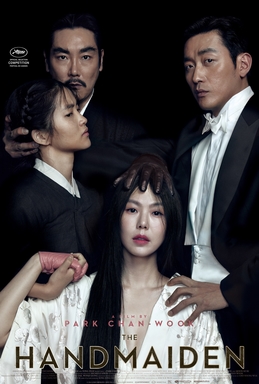 Although I’m always reading, usually several books at a time, nothing I’ve encountered in the last month or so has impressed me enough to be worth talking about here. However, I did recently see an amazing film, The Handmaiden, which was based on one of my all time favorite novels, Sarah Waters’s Fingersmith. Hence, I thought I’d cheat a bit by sharing my reactions to the movie, with some references to the book as well.

I read Fingersmith not long after it was released in 2002 (having adored Water’s previous novel Tipping the Velvet). The book is a tour de force upending of Dickensian tropes we all grew up with: the penniless orphan raised by petty thieves; the lonely mansion with possibly mad inhabitants; revelations of secret pasts and hidden connections between seemingly chance met characters. Waters leads you along what seems like a familiar narrative trail, only to pull the rug out from underneath you. She’ll suddenly twist the story into a different (but equally familiar) shape, only to surprise you again in a few hundred pages.

Layered on this clever and exquisitely crafted plot is a lesbian love story hot enough to satisfy any reader of this blog. The final result is a seamless masterpiece. My reaction when I finished Fingersmith was heartfelt applause.

Korean director Chan-wook Park’s adaptation of Water’s novel moves the action from Victorian England to nineteen thirties, Japanese-occupied Korea. Sookee, an orphan raised by a band of pickpockets, is chosen by the master criminal Count Fujiwara (who is neither noble nor Japanese as he claims, but expert at feigning both) to implement a complicated scheme of fraud, seduction and theft. The count finds her a position as lady’s maid to a lovely, sheltered heiress, Lady Hideko, who resides with her book-collecting uncle in a massive half-Western, half-Japanese chateau. Sookee is supposed to get close to Hideko and encourage her to elope with the ersatz count. Once the marriage has been consummated, the two crooks plan to commit the high-strung noblewoman to an insane asylum and split her vast riches between them.

All is not as it seems, however. (That’s a profound understatement!) For one thing, Sookee and Hideko find themselves irresistibly attracted to one another. Meanwhile, as the plot progresses, viewers become less sure just who are the villians and who is the victim. The director handles the plot shifts almost as deftly as Ms. Waters herself, peppering the action with clues that you notice but dismiss as unimportant, until they turn out to be keys to the real story.

Many aspects of this movie impressed me: the richly textured historical setting, the gorgeous cinematography, the multi-level characterizations, the subtle and effective script, the observations on ambivalent Korean attitudes toward their occupiers, the scary and convincing portrayal of child abuse. What I want to talk about in this post, however, is the eroticism in the film.

As it turns out, The Handmaiden is more than a dark, engaging tale of deceit, betrayal and revenge. It’s also a movie about pornography. Hideko complains from the earliest scenes about the readings her uncle requires her to perform for the rich Japanese book collectors he invites to his library. Gradually we discover that the uncle’s vast collection of rare volumes consists exclusively of sexually explicit writing and drawings. Hideko has been groomed from childhood to provide aural erotic stimulation to her uncle’s guests—and she does so with consummate skill. Wearing heavy silk kimonos, her hair elaborately coiffed and her face thick with make-up, she reads the filthiest of stories aloud while members of the audience squirm in their tight Western trousers.

Even the suave, handsome count finds himself obsessed by the need to possess her. Accustomed to bedding any woman he chooses, the would-be seducer discovers that her sexual coldness inflames him almost as much as her enormous wealth.