Geronimo! Let me be first...


Shit, that could so easily have been me. I’m eternally grateful that it isn’t. 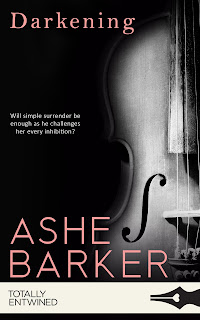 Here's a snippet from The Dark Side. The publisher solved the problem of the word count (it ended up at around 160k) by splitting the story into a trilogy. This is taken from the first book, Darkening, which is on sale in WH Smith's, a major retailer in the UK who by coincidence have a branch just down the road from Leeds Civic Hall.

“Miss Byrne, Eva… I want you to come.” He stops, deliberately waiting for the range of meanings of that phrase to sink in, for me to react. Obligingly, I do. Despite my nervousness and confusion, it seems my body is quite certain of its ground, constantly ready to respond. My nipples are already standing at attention.
He glances down in approval, his smile broadening, as if to dispel any remaining doubt as to whether he’s noticed my response to him, he drops his hand from my face and he gently trails the backs of his fingers across first my right nipple, then the left. There’s nothing subtle in that gesture, definitely not just something conjured up by my overactive imagination. My wishful thinking, even…
“Sweet,” he murmurs. “I love it when you do that.” Looking back at my face but still stroking the underside of my breast, he returns to the fray. “Come with me.”
Yes, okay, I think I might come right here in this chair, in Mrs. Richardson’s kitchen, if you carry on touching me like that… Please…
“We’ll have a good time—a nice meal, a few drinks. I might get a rosette or two and a write up by RIBA for their next review of city living—all good for business. Then we can stay over in Leeds and come back here on Friday.”
Stay over in Leeds? Just me and him and my tingling, aching, tiny little breasts that are going to shrivel and disappear altogether if he stops that gentle grazing across my nipples…?
“What about Rosie’s lessons?” Feeble excuse. Already, I am starting to believe I might be going on this mad scheme, it seems. And I really ought to think about breathing again sometime very soon.
With a wrenching sense of disappointment and loss I feel his hand slide away, back down toward my waist, but I take this opportunity to gulp in a lungful of welcome oxygen. Then his fingers are on my bare stomach as he slips his hand under my T-shirt, starts to slide it back up, toward my breasts. Oh God! Is he really going to…? I can’t let him…
He is still talking, his voice low, soft as he leans in close to drop the words straight into my ear. “Rosie will be fine. You can give her extra lessons to make up. Or not. I don’t mind. Have a day off, Eva. Come with me. Please?”
He has reached my breasts again, bare and braless as usual—thank God—and his fingers are lightly feathering across my swollen nipples, first one then the other. He is hardly touching me at all, but I have never felt anything so…intense in my life. Gently, he takes my right nipple between his thumb and index finger, rolls and squeezes very lightly, with hardly any pressure at all, but the new sensation is enough to make me arch my back sharply and gasp. As I thrust my breasts forward into his hands, he cups the right one and massages it, first softly, then more firmly as I start to squirm against his hand, moving in for his touch.

Darkening, book 1 in The Dark Side trilogy
Amazon
Posted by Ashe Barker at 7:59 AM