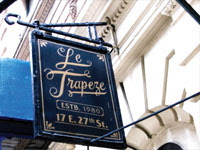 [Note: this is a repost from another blog. Furthermore, the experiences discussed date from more than a decade ago. Apparently the club is now closed (https://www.yelp.com/biz/le-trapeze-new-york). Very sad. Still, it’s a perfect fit to the topic, so I thought readers might enjoy it anyway.]

Have you visited a sex club?

I’m no expert on swinging. However, I can share my personal experiences at the famous New York sex club, Le Trapeze. My husband and I have spent close to a dozen evenings there over the years, when we happen to be in the city on a weekend.

There's a buzz and you pull the door open, stepping into a world where you just might be able to realize your fantasies.

The light is pleasantly dim, with a flattering rosy tinge. Rock music with a heavy bass thumps in the background. Ahead of you is a counter with a coat check and a bowl of free condoms. A nude soft sculpture angel swings on a trapeze over the head of the smiling clerk. To your right you'll find a dance floor complete with a twirling disco ball, surrounded by couches which are occupied by people in various stages of undress. A TV on the wall displays adult movies, a never-ending parade of penetrations to get you in the right mood. To your left is the bar and buffet—no alcohol is served, although you're welcome to bring a bottle, but the entry fee includes soft drinks and all you can eat.

Of course, you're not thinking much about food.

If it's your first time, Len, the manager, will give you a tour. He's a friendly bear, with a powerful body, curly gray hair, and a relaxed manner. He leads you down a corridor lined with closed doors. “Private rooms,” he says. “No one will disturb you if the door is shut.” The area at the end of the corridor includes a kind of mezzanine, a raised platform shielded by a wrought iron barrier, the floor strewn with mattresses. Although it's early, you can make out a few naked forms on those mattresses, limbs entwined or humping away with frenetic energy. You try not to stare, much as you want to. Later, you'll come to understand that it's perfectly okay to watch. That's the whole point.

To the far right, Len points out the entrance to the locker room. “Rick will give you a number. Just ask him when you want to get in to your locker. You've both got to be there, though. Any couple who comes together has to leave together.” This is one of the few rules at Le Trapeze. The other one, which everyone seems to know without being told, is “no means no”.

Len points upward. “Upstairs are semi-private rooms. Some of them have—equipment.” When you investigate later, you find odd chairs of twisted metal tubes, with stirrups to support spread thighs, vaguely reminiscent of a doctor's office but offering far better access. The “semi-private rooms”, you discover, have no doors. They tend to be occupied by triples or quartets. The narrow hallway running between them is crowded with naked men and women, all craning for a view. You feel a hand weighing your breast, a hardness brushing your rump, casual, exploratory. Do you want this? You can say yes. You can say no. Or you can simply be silent, allowing things to happen.

After the tour, you can return to the locker room and strip, wrapping up in the towel Rick hands you. Or you can stay dressed for a while, relaxing on one of the sofas, making out and getting turned on by the people around you.

When we visit, I like to wear something risqué and accessible. Think plunging necklines, fishnet stockings, high-heeled boots. So I don't necessarily want to get naked right away. We'll settle down near the dance floor, on one of those plush couches. My husband will slip his hand under my miniskirt and finger me through my split crotch; I'll loose his erection from his pants and start to stroke. I might slip to my knees and take him in my mouth, feeling my skirt ride up my damp thighs, deliciously aware of the lustful eyes that might be feasting on us as I feast on his cock.

The physical variety of people playing at Le Trapeze is remarkable. There are taut, athletic twenty-somethings as well as well-worn couples ten years older than we are. Given New York's multicultural population, you'll see complexions of every hue, buzzcuts and dreadlocks, tattoos and piercings. There are always a few pairs who are simply drop-dead gorgeous. My husband and I know that we're unlikely to be of interest to them, but they're a lot of fun to watch.

About half the times we've visited Le Trapeze, we haven't gotten involved with anyone else. The other times, we've started with conversation and then adjourned to a private or semi-private room. I don't really care to be intimate with someone based entirely on a physical attraction. In fact it's difficult for me to separate physical from emotional attraction. As I've shared in other blogs, my husband and I have always been interested in polyamory. We come to Le Trapeze hoping that a connection might turn into a more enduring relationship. So far we haven't been successful in our quest. However, we've had some good times during the search!

You might wonder about jealousy. How does it feel to watch your husband having sex with another woman? How does he react when a stranger goes down on you or fingers you to orgasm?

I can't speak for other couples, but somehow neither of us are bothered. We know that we're going home (or back to our hotel) together. I have no doubt at all that I turn my husband on. The fact that he's aroused by other women as well does not reduce his attraction to me. The fact that I'm bisexual makes things even easier, since we tend to have similar tastes in women.

Do I get nervous? Certainly—pretty much every time we visit. I feel shy and embarrassed at first. However, it soon becomes difficult for me to distinguish the trembling of anxiety from the buzz of excitement. The atmosphere at Le Trapeze is ripe with sex. You can't help but feel it and react.

Or I'll be straddling my darling, hands braced against the wall, grinding myself against his luscious hardness. I arch my back, knowing that in some sense we are performing, and enjoying every instant. Perhaps there will be hands cupping my ass or stroking my cleft. My husband feels them, too, and groans.

I guess that in this case, I'll have to continue using my imagination.