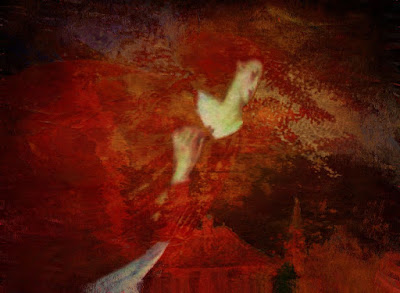 She lays on her back, the little girl, Mirabella, listening to the voice of her mother and father arguing downstairs.  Sometimes it turns bad.  Tonight it's not so bad yet.  She stretches her hearing, her senses, moving between sound and something like smell, hearing and touching the air to know which way their talk is going.   Coffee.  Alchohol, sharp and sweet.  A tonality.

She forces her senses to stretch and stretch because she doesn’t want to be here.  If she can just stretch hard enough she can make herself "swing".  Make her mind pop.  She doesn’t like it when they fight.  She feels the tingles, first in her fingertips and the inside of her ears, tickling.  Now her legs won’t move.  She is not falling asleep, but she feels herself stretching like taffy  into the air as she begins to leave her body.  Soon she will ride the night with the special gift she has which she had always thought everyone had.  When she discovered she was the only one it made her cry to feel herself so different and then to feel sorry for the other people – the ones who couldn’t stretch, the normal people, who couldn’t swing between minds.

Her senses stretch.  And stretch.  The fuzzy, taffy feeling in in her head now and she feels like she wants to sneeze as the feeling creeps through her nose.  Then her eyes itch and she pushes the stretch, the swing of her senses, further, boldly, as far as it will go, like pushing out a turd on the potty, she pushes out her soul.

And then feels herself pop.

She is a seed.  She is absolutey a seed and feels herself float on the breeze from the window.  Her body, inert below.  The dandelion seed floats to the door, wills itself down the stairs, slowly to where the mother and father are fighting.

The voices are harsh.  They feel different to her as a dandelion seed.  She doesn't see them, has no eyes to see, has forgotten how to understand the words but feels them in the air, the warmth of their breath.  She wills herself up the stairs again, in through the door, there to the breeze of the window where she floats and feels the air.

Outside the open bedroom window a bat is looping and darting through the light of a street lamp, snagging the bugs that come to the light.  She touches the bat with floating senses and swings delicately into the bat, not breaking it's attention  Only visiting, because she loves the way bats think.  Holding her thoughts still so she won’t confuse it and cause an accident.  A bat knows how to be a bat, she does not.  But oh – what bats can hear.

Inside the bat, she feels blind but resists the urge to use its eyes.  This is swinging, to move the soul in and out, to let the creature dance your spirit within itself, like the lady in the circus flying through the air between trapezes.  She feels the world the bat makes for her with its sound, it radar so fine.  There, a mosquito's moving blip, the pinpoint of sound, so perfect as the bat dives and snatches.  There a delicate moth, the evening is full of food, but the echo of the moth is sour –a sour sound! – that says it is poisonous.  But then another comes and the bat circles, loops, snatches, triumphant.  A tasty moth sounds different from a poisonous one.  The night is so alive.

But tonight she wants a whale.

She wants to sing.

Leaving the bat.  Floating free, a bubble on the ocean of mind and sound.  Far flying in the deep dark.  A moon, full and high and peach as she moves to the shore of the sea and out and out.  Flying fast, the ocean throbbing vast with life.  Far out, far out a white spout in the moonlight and the smaller spout of the calf.  The girl loves mothers.  And whale mothers are the best of all – she swings.

The feelings of a whale, of a mother whale, they are vast.  They are alien.  In the mothers ears she hears the whale song of a big male – she knows it is a big male but doesn’t know how she knows – the male is not singing to her only, but sending its sound in the vast and living deep.  It’s far away, but the water carries it clear.  She hears the music, the calf hears it too and turns toward the sound and the emotions that move through her, the thrill, the rare thrill of an intelligence so vast and still so far from human in its contentedness.  Its food is all around.  Its calf is with her.   What the whale hears is a world far away from the dry practicality of the bat.  The bat hears to eat.  The mother hears to feel and know itself.  The sea is full of life, and on the shore the parents are fighting.

Let them fight.  She feels the big animals sweep of emotion that is so inhuman and so exquisite and all the world full of vastness and blindness and smallness and singing sound.

Someone is standing over her at home.

The street light.  The window. She hovers and her mother is there closing the window.  Her mother's left eye is swelling.  There is the aroma of blood in the room.  Below,  Mirabella's empty body is breathing softly, but she is ready to swing home to it if her mother speaks.  She has frightened her parents with her empty corpse in the past when she swings.  They know she is doing something, but they don't know what it is.  Once they rushed her to a hospital and she had to spend all night finding herself.

Her mother picks up a book with animal pictures from the floor and puts it on a shelf.  Sighs, leaves, shuts the door.  Her slippers slap slapping down the stairs.

She feels afraid and wants to visit her friend Johnny.  Johnny the worm lives in the ground.

She loves johnny.  He makes her feel strong.

She hovers over the flower bed in the dark.  There.

Johnny the earthworm, does not know what eyes are or what they would be used for, deaf without ears, feeling the vast silent ocean of earth witgin the small sealed universe of himself.  Johnny is never frightened because he is never curious.  Johnny is indifferent to the earth’s vastness, though once she tried to bring the image of it to his mind.  Johnny feels her, gives a little twist in the cool damp ground – and moves.  Reveling in his beastliness, in his earthworm strength.  Like an earth moving machine, throwing aside the earth, moving the world with its snout.  She feels her muscles that turn the earth aside when she needs to feel strong.

She swings out.  Upstairs, the window.  She swings in.  She is home and her eyes are open.  She's strong for whatever is waiting downstairs.