These days I tend to find myself writing less filth than I used to. Maybe it's an illusion. Perhaps I'm becoming de-sensitised in my old age or maybe I'm less obsessed with wall to wall sex scenes than I used to be. Even so, I didn't have to scrape the bottom of the barrel that much to come up with something pretty smutty.

This is taken from The Audition, a short sci-fi story I wrote for an anthology, Love and Lust in Space. 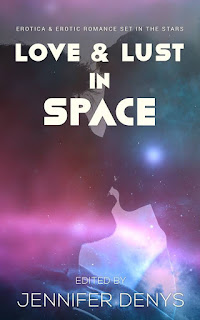 
When she accidentally opens a wormhole whilst working for NASA Lucy tumbles through to find herself in a parallel dimension with no way back. Ever.


In this new and terrifying world she has to choose a dominant mate from the group of males all more than happy to audition for the role.


Lucy flinched at the sharp tap of fingers on her temple. "In here, no, perhaps not. But your sexy little cunt has different ideas. You hated us. In your head, you hated everything we did to you, but your cunt loved it. You came for us five times, but we could have taken you much, much further. Your submission was ours to take, to exploit. This is how your body yearns to be treated. Isn't it, Lucy?"
Posted by Ashe Barker at 10:00 AM