In the mid-late 70s, my parents got into some parts of the alternative lifestyle which the hippy movement celebrated. At one point we moved to a 3.5 acre property, where we built a mud brick house and adopted some of the teachings of Permaculture. We had dozens of chickens, several veggie gardens and at one point, a goat.
Prior to that, and all through the same period, they were also into spiritual pursuits. I remember my mother meditating under a pyramid frame which my father made. We had all kinds of books, the titles of which have escaped me but which were heavily into self-betterment through external beliefs. At one point my mother even had my sister and me convinced that if we were to sit on our beds and concentrate—REALLY concentrate—then we might achieve levitation.
Of course, that last one turned out to be simply a way for her to get us out of her hair for a while, but the rest of it seemed to be a lifestyle they truly believed in.
Some of this possibly came down to the spiritual beliefs of my maternal grandparents. Though staid and ordinary in many ways, theirs was a form of Christian belief which memory tells me now was pretty non-standard.
One time when I was around ten years old, I recall lying on a bed (or it could even have been a massage table) while my grandfather conducted a spiritual healing on my feet. This was because my parents believed I was pigeon-toed. As it turns out, I'm just hypermobile—I have longer-than-average ligaments and soft muscle tone, which means I'm much more naturally flexible than most people. But my grandfather went for it, with my parents' permission, and they all seemed to get something out of the experience.
But probably the most lasting memory of this period (because I still have the written "proof" of it) is when my grandfather's fellow church-goer gave him a few pieces of paper on which she'd written out all my previous lives back to the birth of Christ. There were hand drawn pictures as well.
I never met the woman. I was told she puts herself into a trance-like state and channels the information. Indeed, the written page was signed off with "I remain, yours in Christ the Master, Alaxander of the Galaxy".
The haunting thing for me, at that time, was how strongly (desperately?) I wanted to believe all kinds of psychic stuff. I believe I was around twelve years old, and trying to come to terms with how damn much there was to learn about life. So who was I to question any of this stuff, especially when it was so fascinating?
It was also well done, in that she never claimed I was anyone particularly big or famous. Occasionally I was an official type person (a Bishop of York in the 13th century), or my life skimmed across people of note (I was one of Florence Nightingale's first young ladies). I was more often female than male, and I lost a hell of a lot of menfolk to war and conflict.
One of the other notable parts of the whole document is how inconsistent it is as a piece of narrative. I don't pretend to understand the language or the overall concept anywhere near completely. My first life listed was, apparently, when I was a young girl working at "the INN" (at the time of the birth of Christ, natch). Yet my second life listed is apparently that same life, at the point of "death into birth".
My lives occurred two centuries apart almost all the way through. 1st century, 3rd, 5th, 7th, etc. And then, in the 17th century came this:

It is the 17th century. You are a traveller from a planet far away. In this your first earth life you choose to become a Gipsey. You have a wonderful time. You marry a dark eyed beauty and have 10 children.

As I say, there is great inconsistency throughout the document, if the words are taken literally. That was the tenth life listed, yet it speaks of it being my first earth life. I'm not sure if that means all the other lives occurred on other planets, or other planes, or whether there's some creative used of a Delorean involved.
Now, I'm closer to 50 than 40, and I've seen some shit. I've been through a few things, and I've learned a ton of stuff. And every time I step into a new area of knowledge, it really is a whole lot like opening a door. You step through and suddenly realise the world, and all the things in it, are so much more complex and overwhelming and impossible than you ever believed. So again, I find myself saying "who am I to question any of this stuff?"
I've always loved stories of psychics and people with extra mind powers. "The Chrysalids" by John Wyndham, for example. "The Gift" (the movie with Cate Blanchett) as well. The Grave books by Charlaine Harris and the wonderful Miriam Black books by Chuck Wendig. Just because those are all fictional doesn't mean the powers the characters possess are actually impossible. And if I lie on my bed and concentrate hard enough...well, who knows what I might achieve?

My newest release came out not too long ago. It's my first time playing in someone else's sandbox (in this case, Milly Taiden's "Sassy Ever After" Kindle World). I've been making covers for Milly for nigh on three years now, so it was a ton of fun to put my words to good use as well. 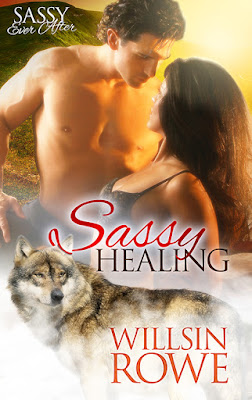 Skilled Chicago surgeon Adam Gunnarsson abandoned his wolf heritage—and elitist parents—when heartbreak tore his world apart. And he swore never to let love sink its fangs into him again.
When family commitments lure him home, though, his determination is tested by Simone, a spicy human with more curves than baseball, and the voice of a bourbon-soaked angel.
Pressured by his parents to mate—to a suitable shifter girl, of course—Adam is instead drawn to the sassy singer whose heat seems destined to heal the rift between his two halves.


But as passions rise, so too do tensions. And anyone who’s not a predator becomes, by default, prey.

Available from Amazon.
Posted by Willsin Rowe at 7:19 PM