I feel like I’ve given you guys my best uncanny stories based on personal experience already. A pitfall of sticking with the group for a while, I guess.

So I thought I’d share a ghost story I wrote for an anthology called Like A Chill Down Your Spine, edited by Artemis Savory.

It’s called “Dear Kim,” and what strikes me as I think about it is that it’s probably based in reality and actual events more than the majority of the stories I write, even while being largely made up.

The story takes the form of a letter to Kim, the narrator’s college friend who also happens to be the unacknowledged object of her affections. Kim, per se, is not a real person, but I’ve had that friend so many times it hurts, and some of the incidents the narrator describes (of times when their closeness seems on the verge of becoming romantic) are based on events from my actual life.

The narrator is apologizing to Kim for ghosting over Spring Break, which I didn’t intend as a pun or connection to the theme, but which now strikes me as funny. She’s explaining what she was up to and the ghosts she saw, and what they made her realize.

The narrator, it turns out, went to stay with an old woman who is haunted by a female lover she never fully acknowledged. Their back story, too, is based on real things I heard growing up, and the place where the story is set is somewhere I have lived and know quite well.

So while the uncanny part is invented (I never saw these ghosts or experienced them that way), so much of the story seems absolutely true to me when I think about it.

I have a friend who says (I’m paraphrasing) that writing speculative fiction is a way of making your metaphors very literal, and I think that’s true for me here. I am haunted, emotionally, by the friends I’ve had who inspired Kim. I am haunted, emotionally, by unacknowledged feelings and regret. And in “Dear Kim,” I turned that haunting into an uncanny truth rather than a psychological one. 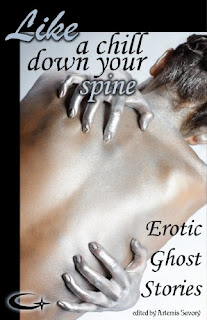 I got to the Springs and it was awesome. I figured I could spend all of Spring Break there if I wanted to and Jessie didn't mind. I hiked and did nothing and felt like I had traveled to another world entirely.
In the afternoon, I finally made my way to the water. People went scuba diving there. I watched them put on their gear and dive down and disappear. Even in the brightness of day it gave me a shiver, thinking of that cold water running down far below the cheery swimming pool where kids played with inflatable swim toys.

I peeled off my outer clothes and got in the water. At first, I stayed near the kids, liking the knowledge of concrete below me. But the depth of the spring made itself known even there. The water ran colder than it should have under that powerfully hot sun. Before long, I swam to the deeper end, clinging to the side of the pool and peering down, hoping for a glimpse of the divers.

Something trailed down my leg. I shook myself, thinking I'd gotten wrapped in a water plant. A moment later, the same touch teased my left leg. Tease is the right word, too. Whatever it was stroked my skin, sometimes clear and sometimes barely there. I thought of the party where we met, when you ran an ice cube down my spine, and how when I turned around you laughed and laughed. I yelled, but you grinned through it all, and the next day we were friends.

I shouldn't distract myself from the story with that, though. I reached down to dislodge the plant and didn't feel anything. I decided it must have floated away. Before I could forget the whole thing, the touch returned to my right leg, where it ended by grasping my ankle with unmistakeable fingers and giving me a tug.

I jumped a mile and looked down into the water. That was the first time I saw her. Pale, pale, pale girl. Short red hair haloed around her face and wide green eyes so pure the water didn't fade their color. A little nose and big ears, and friendly, high cheekbones. Her bathing suit was the first clue something was wrong — she wore a little red 1950s number more like a minidress than a suit. Could have been retro, but there was also her expression. She grinned like she had a secret, but tugged my leg like her life depended on it.

I screamed a little and dipped under to grab her, but couldn't feel anything where she ought to have been. I've never been good at keeping my eyes open underwater, so I surfaced to look for her again. Nothing.
I swallowed. They had a lifeguard near the pool. He was even looking at me. I should have gone to get him, I guess, in case she was a real, living girl. But I had a bad feeling, and didn't want to spend the day getting lectured about how I shouldn't make up stories that required people to launch needless search and rescue missions.

I got out of the water fast, found my clothes, and headed for Jessie's place. Maybe Daytona Beach sounded better to me right then, and maybe it sounded worse. I was pretty sure I'd seen a ghost, but I liked the way she'd touched me. I liked her eyes.

Now, Kim, I don't want you to get jealous when I talk about this. Please know I'm telling the truth when I mention the times she reminded me of you. I even think I might have liked her because of you. You and I had a few encounters we never talked about — maybe that was my fault. Something about that ghost brought those memories to the front of my mind. The whole walk back, for example, I thought about the Halloween party we went to last year, where you helped me dress in some guy's vest, tie, and hat. On the way out of the dorm, I gave you my arm like an old-fashioned gentleman, and felt so proud when you took it. The fake blood on your prom dress must have killed the effect a bit, but you smiled and glanced at me sideways and I thought at the time I was just excited to be in college, but walking down that Florida dirt road months later, I wasn't so sure.

I thought about texting you when I got back to the house, but didn't know what to say. I guess that was the real beginning of me disappearing on you, and I wish I could go back and tell myself to just put "hiiiiiii" so you knew I was thinking of you. Always.

I read for a while, had coffee with Jessie, and pictured myself spending all of break in that sleepy routine. It got dark faster than I expected. I went to bed, heart pounding when I opened the door to that room.

If I expected a repeat of yesterday's scene, I was in for some disappointment. It smelled like me. The bed sheets remained crumpled exactly the way I'd left them. I turned out the light and fell asleep quickly. Sun makes you tired.

But the ghost hadn't had enough of me yet. I woke up a few hours later, cold. My feet had gotten out from under the blankets, and I wanted to pull them back in but couldn't quite summon the will to do it. You know how it is when you're mostly asleep. You want to do something, and you lie there thinking about it and half-dreaming, but you don't quite get around to actually doing whatever it is.

I dozed that way for a while. Maybe you will think this next part was a dream, but I don't think it was. A finger caressed my calf. I recognized the touch from earlier that day.

It didn't stop at the knee. A hand pushed the blanket up to my waist, and the fingertip continued its journey up my inner thigh. I wanted it to keep going, all the way to my panties and then some, but it moved so slowly. I didn't dare to respond. I didn't want to scare off the person behind the fingertip.

As I lay there being carefully touched, I remembered Thanksgiving, when I went with you to your parents' house and we shared your bed because the house was so full of your relatives. Sometime that night, I felt the heat of your arm, so close to me that the hairs on your forearm tickled the back of my hand. You shifted, so slowly and patiently that I didn't believe you were asleep. You touched the back of my hand with your thumb. I thought I would never breathe again. I lay still and waited. Maybe I was turned on, but at the time, I was just aware of curiosity. I wanted to know what you were up to. But you didn't move, just pressed your thumb against my hand until I had to speak up or fall asleep, and in the morning I convinced myself you must have done it in your sleep.

The fingertip climbed my inner thigh and I suddenly understood, like it had hit me in the head. You meant something when you touched me in the middle of the night. I should have told you I was awake, and that it was OK.

The fingertip stopped moving, and a tongue touched my knee instead. The wet warmth of it followed the trail blazed by that finger, easing its way up my leg and toward my dampening panties. A few inches from my crotch, the tongue slowed even further and flicked against my skin, in time with my heartbeat. I moaned and opened my eyes, needing to pull her close.

The room was empty.

Nobilis Erotica hosted an incredible audio version of this story (the link is here), so you can hear it in full that way. There does turn out to be something uncanny there. “Dear Kim” is a story that took me by storm. I could hear it being dictated in my head, and I heard the narrator’s voice with absolute clarity.

The narrator in the Nobilis Erotica version sounds exactly like that voice in my head. I actually cried when I listened to the audio because of the way that hit me.

If you’d like to read the whole book, which is excellent, you can find it here. If you do, it would be awesome if you left a review on Amazon. The book is currently doomed by a 2-star review from an inattentive reader who seems to have misinterpreted my story as some sort of grandmother/granddaughter incest. The book as a whole deserves better than that.