A safeword sounds so simple. It’s a thing you say to stop the action when it gets too intense. It keeps a scene from crossing the line between fun and harmful.

The safeword approach I’ve most commonly encountered is the traffic light system—red for stop, yellow for slow down, and green for keep going.

An edge sounds like a line, a clear point. You’re on the cliff, or you’re falling off it. You’re in Florida, or you’ve crossed into Georgia. 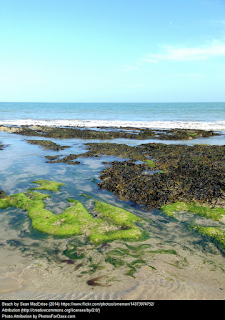 Saying so makes me feel like an irresponsible bottom who no one should play with, but the more I’ve thought about this over time, the more it seems true to me. I’m trying very hard to pay attention to myself and my situation while playing, and to keep a part of my brain aware the way a top has to (because I don’t want to just fully abandon myself to them). However, I’m not going to define the edge precisely and perfectly every time.

I think I wouldn’t manage to even if my goal was to always stop early. There are moments on the beach when you take one careful step forward and the land seems to fall out from under you. There are moments when a wave knocks you off your feet and begins to sweep you out to sea. The only way to be sure this won’t happen is to avoid the water, or perhaps the beach entirely.

There are a few other forces at work as well. In my experience, a lot of bottoms have the idea that they ought to be tough and avoid saying a safeword “too early” at all costs, and a lot of tops are only dimly aware that they’re allowed to say a safeword, too, if they need to. So this sets up a situation where people are incentivized to say a safeword too late.

I was lucky enough to play with a very conscientious and responsible top for a while, and she tended to err very much on the side of caution. What that made me realize was that one can always come back and play another time, pushing harder if you want to. I wish the incentives fell more in that direction. (Though, as I think I’ve been making clear, that wouldn’t guarantee safety).

Another force at work, at least for me, is that, while a safeword works well for me as far as physical pain, I find it confusing emotionally. If I get into certain trauma-related areas during a scene, I often can’t remember a safeword, or can’t think clearly enough to use one. Safewords are touted as this great thing that avoids confusion, but I eventually realized that for me they introduce more confusion than they reduce. So I now ask tops to take my words literally. If I say no, I mean no. If I say stop, I mean stop. I realize this wouldn’t work for certain sorts of consensual nonconsent, but for many other types of play, it helps me get out of trouble when I fall into it emotionally. Even if I’m pretty far gone, I still have the instinct to say no if I need to slow down, or wait, or something similar, even if I can’t remember a code word.

Finally, I’ve felt a lot of shame at times when I realized I ought to have called a scene sooner. BDSM at its best can involve very intentional and clear communication, but I wish more people talked about how it takes a learning curve to reach that place, and how you can still screw that up, even with practice and good intentions. I wish there was more focus on what to do when—not if—someone misjudges when to say a safeword, and how to care for each other in the aftermath. I sometimes get the impression that people think it is possible to execute these things perfectly and never have problems.

And I wish we talked more about beaches and shorelines and the muddiness and murkiness of sandy water. I think it’s a better metaphor than the deceptively sharp and clear idea of an edge.

(The photo attribution above is really small, so I'll repeat it here. The photo was taken by Sean MacEntee, used by creative commons attribution 2.0, sourced from this link, and found through photosforclass.com)
Posted by Annabeth Leong at 12:30 AM