A Man's a Man, For All That 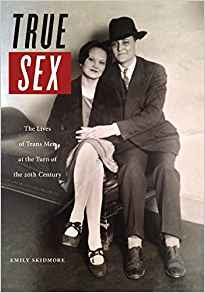 “In the mid to late 1860s, a trans man who went by the name of George Green married Mary Biddle in Erie, Pennsylvania. . . It is unclear where George and Mary lived immediately following their Pennsylvania marriage, but at some point in the 1870s the couple moved to the rural countryside seventy miles outside of Raleigh, North Carolina. . . At some point between 1900 and 1902, the couple moved 140 miles to the north, to the small town of Ettrick, Virginia."

Why is all this noteworthy? Because "George Green" (born in England in 1833), who spent all his life doing farm labour in the United States, was found to be biologically female after his death in 1902.

Were the Greens' rural neighbours shocked and horrified? It seems not. Here is what George`s widow had to say, quoted in a Virginia newspaper: "He was the noblest soul that ever lived. He has worked so hard through his life, and has been all I had to cheer me. No man can say he ever wronged him. He was a Christian and I believe he is now with Christ."

Apparently, Green's funeral was held in a local Roman Catholic church, and he was buried in the Catholic cemetery in Petersburg, Virginia.

"This is just one of the historical stories of "passing" women, or trans men, in True Sex: The Lives of Trans Men at the Turn of the Twentieth Century (New York University Press, 2017) by Emily Skidmore, an Assistant Professor of History at Texas Tech University.

As Skidmore shows, most of these men (people?) lived in rural areas, not in urban communities where "queerness" might be less noticeable. Most of them married cisgendered women, and lived conventional lives as white male citizens. As the author shows, whiteness, hard work, and patriotism were all important components in their social acceptance in the American "heartland," even after their "true sex" had been revealed.

This book is one of a spate of recent studies that disputes what "Jack" Halberstam has called "metronormativity:" a widespread belief among students of "queer" history that before the Stonewall Riots of 1969 (in Greenwich Village, New York), LGBT individuals migrated to cities so they could live with any smidgen of safety.

The men (and this word seems much more accurate than "women") in Skidmore`s book lived far from any contemporary edgy, artsy, avant-garde communities, and most of them professed conservative values. For all practical purposes, they were male citizens. They ploughed fields, chopped wood, fought in wars, ran businesses, drank and smoked in saloons. And they voted in local and national elections before women were given the right to vote in 1920.

This is a fascinating book, and as the author explains in her introduction, the research was made possible by modern technology. She spent several years combing through digitized regional and national newspapers from about 1870 to 1940, and the thoroughness of her research wouldn`t have been possible while all this material only existed on yellowed paper.

For better or worse, this historical information throws a monkey wrench in the concept of a coherent "queer" community, "queer" identity, or "queer" history. Queerness has always come in a rainbow of colours.