In September, a gay-male colleague (a talented and prolific fantasy writer himself) loaned me his copy of Queers Destroy Fantasy! Special Issue. It was produced as a paperback by Fantasy Magazine in December 2015 (Issue 59), and edited by Christopher Barzak. It includes short stories, a novel excerpt, non-fiction essays, author bios, and black-and-white fantasy art.

This drawing by Elizabeth Leggett, included in the art section of the anthology, was used by Lethe Press as the cover of Bitter Waters, a story collection by Chaz Brenchley. 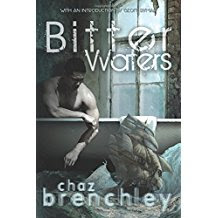 Under the circumstances, I would have expected Queers Destroy Fantasy! to have a shortage of women characters (and/or authors) on grounds that women have their own series, but this is not the case. The first original story, “The Lily and the Horn” by Catherynne M. Valente, is set in a vaguely medieval world in which conflict is resolved not by knights with lances or soldiers with arrows but by women who are either experts in cooking with poisons or in detoxifying the victims of poisonous feasts.

Two young girls, who met in the Floregilium (school of botany), have never forgotten their mutual attraction, even though they were each chosen as the wife of a lord for their opposite talents: to kill with plants, or to heal with them. The narrator, a “lily,” has prepared a deadly feast to determine the outcome of a land dispute, and all the guests know what is at stake. The lily’s old friend, a “horn,” is there to heal her husband’s vassals and allies, if possible. The relationship between the two women, like the dishes on the table, is bittersweet.

In “The Lady’s Maid” by Carlea Holl-Jensen, a predatory noblewoman is able to wear the severed heads of the young women she has killed, see out of their eyes, and speak with their mouths. The “lady” keeps a collection of heads for different occasions, like a collection of hats. Her seemingly loyal maid, who stays with her after everyone else in the castle has run away, discovers how to control her mistress.

The predominance of women characters continues in the reprinted stories, including an ornate fable of the Mughal empire, “The Padishah Begum’s Reflections” by Shweta Narayan. Another reprint, “Down the Path of the Sun” by Nicola Griffith, is a heartbreaking story of survival and loss in a dystopian future.

In “The Sea Troll’s Daughter” by Caitlin R. Kiernan, a mortal woman dies while giving birth to the daughter of the sea troll (who probably raped her, but no one knows for sure), leaving a monstrous baby to survive with the help of a village witch. A foolhardy female bounty-hunter comes to town to kill the sea-troll for the non-existent fortune promised by the local village for any hero who could do that. Most of the mortals in this story are revealed to be fools, liars, and drunkards, but the bounty-hunter and the local barmaid have an affair of convenience, and the sea troll’s daughter—who lives alone in the unhospitable wilderness--gives them more help than they could reasonably expect.

Two noteworthy stories by male authors are “The Duchess and the Ghost” by Richard Bowes, which was reprinted later in an edition of Best Gay Stories, and “The Ledge” by Austin Bunn, in which a shipful of Spanish sailors, some time before 1492, actually sails to the edge of the world. The young narrator, who hopes his affair with an older man, Diego, will not be discovered and punished, is delighted to rescue his widowed mother from the “other side:”

“Your hands are folded across your chest and you stare away, at the ledge. You look precisely as I left you, your long black hair damp and loose against your back and your bare feet white as salt. Around me, the crew and the others race to trim the Elena’s sails in a westerly. The captain is missing and I am full of questions. Are you a dream? Is this a fever or worse? I’m afraid to speak. And so I sit alone, in the shade of the quarterdeck, and write."

Kai Ashante Wilson, author of “So Various, So Beautiful, So New,” is not identified by gender, even in the author interview in the non-fiction section. The excerpt from the novel, All the Birds in the Sky, is by Charlie Jane Anders, who seems to be male by birth, but I wouldn’t place any bets on how s/he identifies now.

Suffice it to say that all the material in this collection is worth reading. Each of these stories contains a universe that seems more enticing than this one.

P.S.: At the risk of hogging the spotlight, I will post again tomorrow. I'm reading a book of historical non-fiction about trans men (the author's term) in the United States, approximately 1875-1935. I promised to review this fascinating study for The Gay and Lesbian Review.