On the subject of taboos or forbidden acts, I am horrified by the drastic laws just passed in several U.S. states that aim to make abortion illegal again. Some of the male lawmakers who want total control over women’s bodies are also opposed to contraception in any form.

I’ve noticed that most of them don’t say anything about forcing fathers to support their children.

Sometimes real life resembles a horror plot: in this case, The Handmaid’s Tale by Margaret Atwood, which is why women protesters against the new laws dress like handmaids, in red robes with white bonnets.

The doomed queen is Anne Boleyne, and her husband, the King, is Henry VIII. The year is 1536.

A courtier, Sir Thomas Wyatt, has been fond of Anne for years, and this seems to be historically accurate. In my story, he sends her a love-sonnet, and they arrange a tryst in her bedchamber so that he can comfort her and possibly get her with child. The story is titled “Begetting.”

In real life, Thomas Wyatt was imprisoned temporarily on suspicion of being too familiar with the queen, but he survived, probably because of insufficient evidence. Other people were not so lucky. Anne was charged with adultery as well as treason (cheating on the reigning monarch was treasonous), and executed along with the men accused of being her “lovers,” including her own brother, George. Most historians now think the charges were completely bogus.

The moist glow of Anne’s skin by candlelight led Tom’s hands to her slender waist and her small, round navel. Her breath quickened as he kissed her there.

An earthy aroma rose from the little thicket of moist dark hair that marked the entrance of Anne’s cunt, her inner sanctum. Tom allowed himself to admire the innocent perfection of her body in the guttering light of the dying candle. Seen in such intimacy, she was like a diverse continent, and her admirer inhaled the spices of its hills and plains, its forests and coves.

The man used both his hands to find and spread her opening. He saw pink folds and felt a slippery fluid before the candle winked out, leaving both lovers in smoking darkness.

“’Twill be well, dear heart,” he assured her. “I can find my way.” He crouched atop her and introduced the head of his staff to her wet opening, praying that his size would be just adequate for her pleasure.

Tom had never wished to enter a woman like a battering ram destroying a castle’s defenses.

The lady held him tightly, as she spread her thighs to make him welcome. And then he was in to the hilt, riding her with an easy rhythm. Her sighs rose to his ears like music, and the squeezing of her inner muscles on his shaft felt more delectable than the embrace of an angel in a virtuous man’s last moment on earth.

Tom doubted whether the comforts afforded to the faithful would ever be granted to him. He resolved to enjoy the pleasures of love while he had the chance.

Soon, Anne’s voice rose to a dangerous level. “Peace, beloved,” he murmured. He too was coming to a climax, but he clamped his teeth together and stifled his groans. He pumped his shaft as deeply into her as it would go, and released his seed. “Ahh,” he sighed. The deed was done.

After a moment of recovery, he wondered whether Anne had reached her own peak of ecstasy. Simultaneous climaxes were said to help conception, but he knew from married experience that the pace of female excitement often lagged behind that of a man. He slipped a finger between her lower lips to find the love-knot just above her opening. That delicate nubbin was swollen and trembling. She gasped sharply as he stroked and rubbed and pinched it. He felt a spasm under his fingers, followed by a gush of liquid and more twitching.

“Tom,” she whispered. It seemed she had no breath left to say anything else.

He lay on his back and pulled her atop him so that he could hold her close and press her head to his heart. Her surrender felt precious to him, and he wanted her to feel that he was truly her protector.

The hot fragrance of her hair was in his face. He ran his fingers through the silken length of it, wondering why a woman’s hair must be completely covered in company. Surely hair was part of God’s bounty, and meant to be enjoyed by his creatures.

Yet Tom didn’t want the natural beauty of his mistress to be shared with the world at large. Better for her to appear outside this chamber only as the queen, swathed in those articles which form a lady’s armor.

“My love.” She raised her head to look into his eyes. “Please remain with me until my waiting-woman returns from the king’s bed. I cannot bear to be alone tonight. You know not what fancies lie in wait to torment me.”

“Then I shan’t leave thee.” Tom’s desire was already returning, and he hoped to claim her at least once more before he must disappear like an incubus.

“Anne, dearest, our son may yet be a great king.” Tom’s words hung in the darkness like a vision of life in the land of Faery.

Both lovers knew that forces were already in play to prevent their dream from reaching fulfillment. They were well acquainted with the ways of the court, and they were determined not to save themselves by betraying each other.

They would never again be as happy as they were at this moment. Let us leave them together in the warmth of the queen’s bed, enjoying the time they have left.

In the long corridor of time since the night of their love, neither the man nor the woman has been forgotten. While one is known as the doomed wife of a king hell-bent on founding a dynasty, the other has been named Father of the English Sonnet. 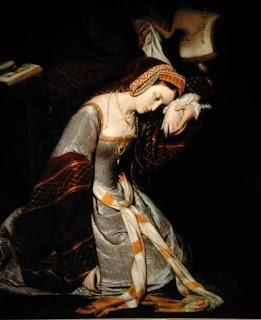