The following scene in my story “The Feast of the Epiphany” is definitely stormy, but it includes glasses of wine and bowls of soup rather than cups of tea. 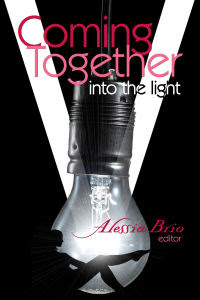 Consider the context: I suspect that most people have taken part in a meal at which someone makes a unexpected announcement to a group of relatives or friends. The scene in which a young-adult son or daughter “comes out” to the rest of the family has almost become a movie cliché, but the revelation of a secret can be more complicated than it is usually shown.

In my story, Joanne (the narrator) is divorced from Peter, and she has a crush on Wendy, who seems like a more experienced dyke. Joanne has agreed to go out for supper with Wendy and her friends Mark and Roland, who seem to be a gay couple. All four friends, who would all say they are “not religious,” are ironically celebrating the Feast of the Epiphany, one of the oldest Christian holidays, when the wise men supposedly arrived at Bethlehem in January to see the baby Jesus. (This is also called Twelfth Night.) An epiphany is a revelation, and all sorts of secrets are revealed over supper, including the waiter’s interest in the proceedings, and his role as a referee.

This story is from my newest collection, Spring Fever and Other Sapphic Encounters (Renaissance Publishing, 2019).

We sit across from each other at a corner table while the waiter makes a show of lighting a candle which must then be covered by its little shade. He seems to be going out of his way to be gracious –- because he needs good tips to pay his post-holiday bills? Because he wants us to know that he is willing to serve two women who look like a couple? Because he knows we are waiting for two men who are entitled to good service?
The waiter offers to take our coats, and we hand them to him. He goes away, leaving us to enjoy the warmth and the dim light.

A gust of cool air brings Mark and Roland toward us, led by the waiter. Roland’s dark hair and sideburns are literally frosted, and Mark looks like a skinny homeless puppy, teeth chattering from the cold. “It’s damn cold,” says Mark as though we don’t know this. “We had to park halfway down the block.”

They settle into their seats, rubbing their hands. Roland looks around the restaurant, then lets his gaze caress my hair (medium-short, streaked-blonde) and linger on my necklace (a pearl pendant from before Peter) and the neckline of my dress. He smiles.

“So what are you lovely ladies drinking?” asks Mark. We all agree to share two bottles of wine, one red, one white.
The waiter returns. Wendy and Mark order the steak and seafood. I’m not sure I can eat all of it, but I am feeling greedy and decide that I can justify the cost to myself if one-third of my meal becomes tomorrow’s lunch. Roland orders a steak by itself.

The waiter is not yet out of earshot when Wendy announces her agenda. “Let’s tell each other what we all did for the holidays.”

Mark grins. “How we kept warm. Man, this is a great season for hooking up.” I look at Roland. I’ve never been told that they have an open relationship. Maybe they haven’t opened that can of worms yet.

Roland looks at Mark, and takes a contemptuous swig from his glass of ice water. “If you don’t care who you hook up with.” The ice clinks as the glass is placed firmly back on the table.

Mark fidgets. “Hey Ro, we agreed to have a good time tonight. No flaming at this table. Not that kind, anyway.”

Wendy leans over and pats Mark on the shoulder. “Don’t worry, baby, I have a thick skin. Roland, we’re all adults here.”

I hate this conversation. Everyone here seems to know something I don’t. I try to keep my face neutral and gaze at the wall beyond Wendy’s head.

She reaches across the table and grabs one of my hands, forcing me to look at her. “Joanne, Mark and I had a thing. It started out as a good friendship, and we didn’t think it would go any further. Well, I didn’t. One time he came over and it got so late that I just invited him to spend the night. My place is closer to his work anyway. It’s really no big deal. We talked about it after he met you” -– she nodded at Roland -– “and I said I would butt out to keep things simple. Obviously, we’re still friends. That’s not going to change.”

“So he can hop into bed with you and your girlfriend and get you pregnant, is that it?” Roland is openly showing his teeth. His hair is free of frost, and now he seems to be steaming. “That’s what all the dykes are doing these days, isn’t it?”

I am really afraid that in an instant, someone’s fist will plow someone else’s mouth. I don’t know who is more likely to strike first, Wendy or Roland. I feel unreasonably responsible for this mess.

“You need to apologize to Joanne,” says Wendy. “She has nothing to do with this.” But I have a stake in the outcome.
Mark is standing up, holding Roland by the shoulder. “What are you doing, man? You knew about her before.”

The waiter appears with the wine, and everyone freezes but me. “Who wants to taste this?” he asks, looking around with raised eyebrows.

“I will.” The resident connoisseur, that’s me. The waiter pours a small amount of wine into my glass with exaggerated concern. The look of it reminds me of fresh blood. I take a sip, nod and say, “Robust and fruity. Very good.” This means go away, and the waiter takes the hint.

“Okay, chill out.” It’s not clear to me if Roland is speaking to the other two or to himself. “I’m not an asshole. I just want to know what the hell is going on. If you’re both straight, you need to stop playing games.” He is looking at Mark.

“Dude, we talked about this.” Mark reaches across the table, and Roland pushes him away.

Wendy is staring hard into Roland’s eyes. “Hey. Roland. Get a grip. You can’t tell me what I am and what I’m not.”

“I think I should just go,” I say quietly, almost hoping no one will hear me or notice my absence.

“Don’t go, Joanne. Please stay. We need to talk.” The look in Wendy’s eyes could melt a stone.

As if to coax me further, the waiter approaches with bowls of soup. Its warm, rich smell reaches us first.

Mark’s expressive face can’t seem to hide anything he feels or thinks. Now he looks upset, and he can’t stop watching Roland. His shaggy hair hangs over his ears in an artless way.

Mark looks feminine to me. Why would Wendy be sexually attracted to him? Because he has the qualities that attract her. They play video games together, and they understand each other. As long as I can keep my own feelings out of the way, it’s not complicated.

Soup is a consolation. The earthy taste of spiced carrots is satisfying, but my stomach isn’t ready for it. I alternate between sips of soup and gulps of wine.

“Is this about sexual identity, Roland? Do you think we all need to be labelled?” Wendy is demanding a logical answer from a man who is choked with emotion. He seems as unable to admit his real fears as any of the heterosexual men I’ve known. Roland is vibrating with the effort not to jump up and lash out.

I feel a surge of compassion for the man who wants to know what the hell is what. Of course he wants a secure relationship, and he wants to avoid being humiliated or left behind. He wants a lifelong, unbreakable promise from his partner, as Peter did. Men like this can’t really get what they feel entitled to, but I can understand why they want it.
------------------------------------