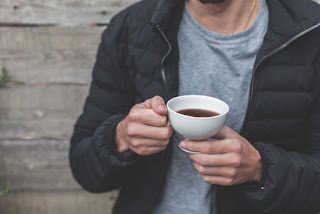 I walk by The Stormy Teacup several times a day. It’s in the concourse of my office building, so I pass by on my way in and out, and when I come down here for my lunch break. I’ve gone in several times and ordered a few things.

I say “Thank you” and drink it and put on my best smile, but when I’m out of sight, I dump it.

No, tea is not my thing.

The man behind the counter, however, is my thing.

Tall, bearded, bespectacled, tattooed, and just a few years older than me. Like, fuck me, he’s my type. He was the whole reason I went in that first time all those weeks ago. I used to just ignore this place when walking past, but one time he was out in front, wiping down the milk and sugar cart. I stopped in my tracks and watched that gorgeous man in his too-tight pants as he worked.

It wasn’t until my co-worker literally snapped her fingers in my face that I realized what I’d been doing. I blushed and brushed off her questions, then followed her to the elevator and up to our office.

Ever since then, I’ve visited The Stormy Teacup regularly.

With it now the end of the day on Friday of a long weekend, I’m faced with the prospect of not seeing this man until Tuesday. I say goodbye to my coworkers and head down the elevator, thankfully without any of said coworkers along with me.

When it reaches the main floor, I step out and to the side, then pause and take a deep breath. I don’t know why I’m so nervous, I’ve spoken to him many times before. Well, yeah, but all those times before I was just ordering tea. Today I want to ask him for something different…

Before I can chicken out and just go home and jerk off like I’ve been doing for weeks now, I ball up my hands into fists and stride through the concourse and up to The Stormy Teacup. The store is empty except for my God of Tea. I don’t even know his name. He’s wiping counters, cleaning up for the day.

He glances up, sees me, and smiles. Do I dare read into that smile? Is it just a “welcome back, regular customer” smile or is it more of a “I really like when you stop by” smile?

I smile back and enter.

He puts aside his cloth and comes to the till.

“Um…” I bite my lip. He stares at that lip trapped between my teeth, then he looks into my eyes and I’m sure I see desire there. Or maybe I’m just imagining it. I’m so nervous. “I was hoping for something different.”

“Oh?” he asks, his voice suddenly lower. He rests an arm across the top of the till. “I hope I can provide you with what you want…”

Just as I’m about to say something more, though I still don’t know what I want to say, a customer comes in. He winks at me and quickly helps the other customer, getting her politely out of the store as fast as he can. He definitely has an inkling of what I want.

He laughs and there’s a twinkle in his eye. “I figured that out a long time ago,” he says. “All my other customers have favourite blends. You’re the only one who orders something different each time, and you never tell me you enjoyed what you tried. I’m either a terrible tea seller and you’re determined to find something remotely enjoyable … or you come in here for a different reason.” There is suddenly heat in his words. Unmistakable heat. I’m not imagining it this time. “So what is it you really want?”

I feel a blush warm my cheeks and I want to back down. I’m not normally so brazen when pursuing a guy.

He stares at me for a very long moment, eyes full of desire. Then he comes out from behind the counter and goes to the front of his store. He looks back at me and for a moment I wonder if he’s asking me to leave, but then he slides the door shut and locks us in and then turns out the overhead lights. The only illumination left comes from the windows and from the little display lights showcasing speciality teas and fancy teacups.

“I’ve been waiting for you to work up the courage,” he says. He walks toward me and then stops mere inches from me. He leans in close and I feel the warmth radiating from his skin. He brings his lips close to mine, but doesn’t touch them. Instead, he looks into my eyes. “How much of me do you want?”

“All,” I manage to say, stuttering on that simple word. “I want want all of you.”

He suddenly presses his lips to mine, kissing me. He puts his hands on my arms and then slides those hands around to my back, hugging me tight, pulling me close. I open my mouth and his tongue slides inside and caresses mine. I moan into the kiss and my knees weaken; my body sags but he holds me up by hugging me tighter.

Eventually, he breaks the kiss. “Coffee?” he asks.

I blink several times, clearing the lust from my mind to process what he said. “What?”

“You don’t like tea. Can I take you for coffee?” He leans in and nibbles at the base of my neck while waiting for my answer.

I nod jerkily. I’ve got somewhat tight pants on; I can’t go parading through downtown with an erection.

He winks at me, then grabs my hand and pulls me around behind the counter. “Get down,” he urges, and I do. He nudges my chest and I lie on the floor. He undoes my belt and unzips my pants, then wiggles them down a bit and digs my cock out of my briefs.

Before I could say anything more, he has my cock in his mouth. “Fuck…” I moan, then lay my head back. He sucks me deep, taking it right to the base, rippling his tongue along my shaft. It feels incredible.

I moan again. I want to call out his name … but I don’t know his name. I caress his head, running my fingers through his hair, then I tug on his ears so he comes off my cock. He releases my erection with a wet slurp.

He gives me a wet, silly grin. “Richard. Dick for short, in the old days, anyway.”

I cup my hand under his chin and wordlessly urge him to climb atop me. He does and presses his body against mine and those delicious lips are against my mouth once more. Reaching between us, I undo his pants and nudge them down, releasing his cock. It’s hard and about the same size as mine, maybe a little thicker. He moans as I run my fingers over his cock head, which then drives him to kiss me harder.

He rubs his body against mine, his cock sliding against mine, the spit on my cock lubing us both. I free my hand from between our bodies and grab his denim-clad ass, urging him to rub his dick harder and faster against mine.

The friction of our bodies and the connection at our mouths has my lust in overdrive. This is making me wild for him and amazingly bringing me rushing head-on into orgasm. I’m not far from exploding and covering both our crotches with my hot seed.

But part of me worries about coming so soon. Will it be off-putting for him? Will he be disappointed?

And then he lets out a quivering moan. A sound I know too well, a sound very similar to the one I make.

I wriggle my hips in time with his, helping increase the friction and rubbing between us, and I let that internal wall I’ve been holding up collapse. I no longer resist what is inescapable.

Moments later he’s still lying on me and we’re both gasping, recovering from it all. I kiss him again, softer this time, and he kisses me back.

“Me too.” He rolls off me and looks at our messy crotches with a grimace. Reaching up, he grabs some napkins from the sales counter and we clean ourselves off as best we can.

“Let’s stay in,” he says. He does up his pants and I can see they’re similarly cum-smeared.

He winks and helps me to my feet. He leads me to a small door behind the till and into the stock room beyond. It’s a cramped space, but at the far end of the tiny room there’s a small table and two chairs. And on top of the table is a coffeemaker.

He closes the door, giving us absolute privacy, hiding us from view from the windows.

“Thank you.” He reaches over and starts up the little coffee pot. “I can’t guarantee how good the coffee is, though.”

“That’s okay,” I say. I reach and grab for his hand, holding it in mine. “It’s more the company than the coffee. After all, I drank all that tea just to talk to you…”