He’s as cool as a Pina Colada on a Key West beach, he’s the kind of guy your mother wouldn’t let you play with, and he’s every bad guy’s worst nightmare. Nick Seven is back in “The Neon Jungle,” a gritty tale of crime and revenge on the mean streets of Miami. 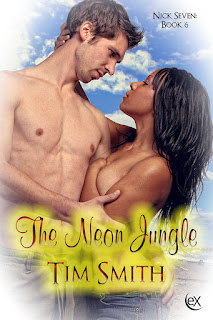 “In the laidback Florida Keys, former spies Nick Seven and Felicia Hagens found a paradise far removed from the covert world of the CIA. Nick, content to run a bar on the Gulf and maintain a low profile, breaks his self-imposed exile when a friend asks for help in getting a local mob boss off his back. Popular singer Jimmie Rae wants to get free from the notorious Turk Morgan, a crooked music mogul who controls the Miami entertainment scene. Jimmie reveals that his girlfriend has gotten caught in Turk’s web, and he wants to get her out before it’s too late.
“As Nick and Felicia explore the neon jungle of South Beach, they encounter the dark underside of the music business. Drugs, prostitution, street thugs, and political payoffs are Turk’s stock in trade, and he isn’t one to relinquish control over his empire. Nick goes undercover as an international criminal to challenge him, but will he succeed in breaking Turk’s hold over Jimmie and his girl? Can Nick use the sting operation to solve a cold case murder he discovers by accident? What other secrets will he uncover?”
This story is a bit different from the other entries in the Nick and Felicia spy thriller series. If you’re familiar with TV shows like “Burn Notice” or “Leverage,” you’ve seen the trope of people pulling a scam on someone to bring them down. In this case, the target is a vicious Miami crook masquerading as a music mogul. He’s sort of a black Godfather, using a network of street thugs and paid-for cops to maintain his illegal empire.
It was fun to write because I got to send Nick undercover using an old alias from his days as a CIA spook, a Greek arms smuggler named Nick Stavros. Along with Felicia and his former partner, the somewhat trustworthy Bones McCoy, Nick concocts a plan to make Turk Morgan think his empire is crumbling around him.
There are colorful locations, quirky characters, snappy dialogue, action, and romance. I made full use of South Beach as a backdrop, with its art deco buildings, bright neon lights, and endless parade of street hustlers to add atmosphere. There are also some dark secrets hiding behind the flashy façade that add to some of the sexual tension.

Nick and Felicia sat in silence for a few minutes, absorbing the night sounds of waves gently lapping on the shore, accompanied by surprised laughter and squeals from people out for a moonlight beach stroll along the water’s edge. The half-moon peeked through a few wispy clouds that lazily rolled by, subtly illuminating the stillness.
Felicia took a sip. “Looks like we have the rest of the evenin’ to ourselves. What do you want to do?”
Nick looked at her, his playful side coming out of hiding, one reflected in his voice. “What we’d normally do when we’re away from home on an overnight.”
Felicia gave a seductive chuckle. “You weren’t kiddin’ when you said you liked this dress.”
“No, I wasn’t. Were you kidding when you said you liked what I’m wearing?”
She stood and slinked toward him, giving Nick a smoldering look that was evident in the dim light. She perched on his lap with her legs straddling his and rested her hands on his shoulders. Her gaze bored into his with a look that communicated more than words.
“Mm-hmm,” she cooed while undulating against him. “I like it a lot. Wanna know a secret?”
“Sure.”
She stood, backed up to the railing a few feet away, and rested her butt against it. She grasped the dress near her waist and slowly gathered up the material, raising it an inch at a time along her toned legs and thighs. Nick’s heart beat faster as more of her body was teasingly exposed. His eyes widened a bit when Felicia pulled the fabric over her crotch, revealing that she was au naturel under the cocktail dress.
Felicia cocked her right leg to the side. Even in the dimness, Nick could make out her trimmed pubic patch glistening with the dampness of her desire. Felicia moved her hand between her legs and lightly ran her fingers over her sex.
“Like what you see?” she teased while fingering herself.
Nick rose and approached her. Felicia opened her arms, and he stepped into her embrace. She held him firmly, easing her head back. She opened her mouth ever so slightly and ran the tip of her tongue along her lips, giving him a silent invitation. He accepted. The fit of her lips was as perfect as ever, and he could taste the lingering sweetness of strawberry lip gloss. He pressed deeper and lost himself in the kiss until she drew away. She touched a finger to the stubble on his cheek, traced a slow line down his jaw, and gave him a dreamy-eyed gaze with a hint of a smile.
Nick became aware of voices from the beach below. He took Felicia’s hand, led her inside, and closed the balcony drapes. No sooner had he turned around than Felicia was on him like a lynx that had cornered its prey. She pulled him close, forcefully pressing her lips against his. Her tongue invaded his mouth and engaged his in an erotic dance. Nick moved his hands along her back until he reached her firm butt. He pulled her dress up while they kissed until her ass was exposed to fondle and squeezed her cheeks, all while pressing against her, his hard-on straining against his pants.
Felicia pulled back slightly and flashed a teasing look. “Are you carryin’ a blackjack in your pocket?”
“No, it’s all me.”