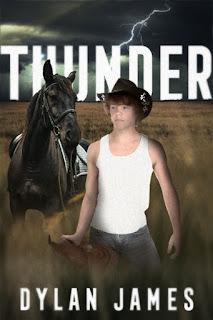 It's by fortuitous chance that my newest queer young adult book is storm-themed and releases during the "storm" month here on The Grip!

Grant Peters is sixteen and wants nothing more than to just compete in calf roping at rodeos and keep winning gold. But there are two obstacles in his path.

The first is Logan Summers, also sixteen, and also into calf roping. Logan is Grant’s only real competition and every time Logan wins, he gives Grant a smug little smirk that sets Grant’s blood boiling. Deep inside, though, Grant knows that his hostility toward Logan is about more than that smirk; it’s about feelings he’s not ready to acknowledge.

The second is Grant’s parents being close to selling the family ranch and moving to the city, away from rodeo, and away from his horse, Thunder.

So when Grant discovers evidence of a deadly cougar stalking the ranch, he decides to take it upon himself to hunt down what would undoubtedly kill the little business his family has left if word got out. Of course, as soon as he sets off into the woods, he runs into Logan, who is undertaking the same hunt to save his own family’s ranch.

Now, these two teenage rodeo nemeses have to overcome their hatred for each other and their uncertainty about themselves if they have any hope of coming together to save their families’ businesses.


My heart thundered loud in my chest and the sound of blood pumping filled my ears. Everything seemed so loud now. I tried to calm my breathing, which was now rapid and shallow, and did my best to get my nerves under control. I stared down the barrel, choosing to aim between the men. If Logan decided to shoot one, that was on him. Me? I’d hit the dirt at their feet, rip a hole in their tents, that kind of thing.

Logan slowly turned his head to look at me and I did the same to look at him. I was weirdly relieved to see sweat beading on his brow — it wasn’t hot enough for that kind of sweat, so it had to be nerves. It made me feel better to know that he wasn’t a cold-blooded killer or something. He looked back down the length of his rifle barrel and I did the same, aiming for a spot between the feet of two of them.

In my peripheral vision, I saw Logan’s finger move to the trigger and rest on it. I did the same. He opened his mouth, ready to shout something at them.

Then I heard the click of a safety being taken off — behind us — and felt the barrel of a gun pressed against the base of my skull.

“Drop it,” said a gruff voice that had somehow snuck up behind us, “or pretty boy here gets his brains blown out.”