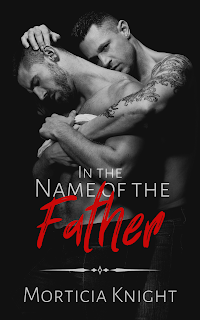 Hey all! I thought I'd drop in and share a bit about my new Daddy Kink book, In the Name of the Father, coming out at the end of the month. This is an angsty, age gap, hurt/comfort story with a heaping dose of kink, and is now on preorder. Keep scrolling past the blurb and links for a short preview :-)

I was living a lie. I couldn’t be caught in my deception, or my family and friends would abandon me. But my fears became reality and I was cast away as if I were garbage. Then this man, a stranger, took me home and showed me that love can take on many forms, that I’m not filled with sin or doomed to go to hell because I’m gay. He showed me that I’m not broken. I don’t need to be fixed. What I need is to be nurtured and cared for.

Seth was a good Christian son raised in a very conservative church.

He learned early on that the world is evil and filled with sinners—but the most horrible thing you can be is gay. When his shame is discovered, he’s shipped off to a special camp that fixes deviants like him. Years have passed since then, yet he still runs from himself every day.

Malcolm was a good daddy for almost 10 years before his boy died.

No longer daring to be too close with another man again, he’s avoided clubs and old friends that remind him of a life filled with a joy he can no longer have. Unable to find a purpose in his lonely existence, he spends night after night in a dive bar at the edge of town. However, witnessing a scared young man being harassed by two bullies jolts him out of his misery.

No one messes with someone vulnerable and helpless on his watch…

Malcolm took a measured sip of his favorite single barrel bourbon. He sat at the bar with his back to the room, one foot on the rail and the other on the rung of the thickly padded, red leather cushioned barstool. Most of his nights were spent at Woody’s. The low-key gay bar at the edge of town provided him with the basics. Top shelf booze, marginally edible food, no hassle and a decided lack of dancing or other hook-up encouragements.
He was done with that shit.
Resting his elbows on the counter, he clutched the half-full tumbler between his hands. Or half empty. The cliché was one of the many he despised. The trite statement meant nothing when life unexpectedly reared up and kicked you in the balls. Not that he wallowed in self-pity—far from it. He had much to be grateful for. He still gained a lot of enjoyment from life and understood that he had it better than many.
However, that knowledge did nothing to take away his personal pain.
“Excuse me. Bartender?”
Malcolm glanced sideways at the young man who was now leaning toward the counter, but for whatever reason, hadn’t edged the other empty stools out of his way to do so. He stood a few seats down from him, and while his voice held a masculine edge to it, he spoke with little confidence. Malcolm’s immediate assessment of him was that he needed someone else to take charge.
The man leaned forward more. “Um, excuse me? Bartender?”
Or to learn how to speak up.
“I don’t think he can hear you.” Malcolm turned from the man who’d appeared startled to be addressed by him then called out to the unaware barkeep. As usual, Larry was at the far end of the long bar chatting up a bear, yet on the wrong side of the alcohol barrier. Only a regular like himself would know Larry was employed at the joint. “Hey, Larry! You’ve got a customer down here.”
Larry acknowledged him with a jerk of his chin then went back to whatever conversation he was engrossed in. Malcolm chuckled then regarded the poor kid who wasn’t having much luck getting a drink.
“He’ll remember he has a job in the next minute or two.”
The young man nodded shakily as he shoved his hands into his pockets. “Thanks. I’m in no hurry.”
Malcolm gave him a non-committal smile then went back to staring into the deep amber abyss of his whisky. Most nights he could be found at Woody’s nursing a drink or three. The goal wasn’t to get shit-faced or even all that buzzed. An alcohol overload wouldn’t do him any favors. Booze was a downer and too much of the stuff could launch his emotions into places he’d rather avoid. The idea was to keep the feelings at a safe distance. Not drown in them.
No, marking time at Woody’s was about not being alone with his thoughts in a big, empty house. The less of his past he dwelled on, the better chance he had of maintaining his sanity. Malcolm glanced up right as Larry jogged over. He seemed a bit rushed and a tad breathless for someone who was working an especially slow night.
Larry regarded the young man. “Before I ask what you want, can I see some ID?”
“Oh, yeah, sure.”
The kid dug around in his slightly baggy jeans that appeared as if they’d seen better days, then retrieved his wallet. Malcolm hadn’t been paying much attention to the guy, but now he realized the T-shirt he had on was a bit worn. There weren’t any stains or holes that he could detect, but whatever design or logo that had once been pressed on the front of the khaki green tee was almost completely faded away. And even though the chill of the fall Oregon air had gotten sharper in the past couple weeks, he wasn’t carrying a jacket.
Maybe he left it on a chair.
Malcolm tore his gaze away, took a sip of his drink and willed himself not to look around the room in search of the kid’s jacket. It wasn’t his business—wasn’t his responsibility to worry about this stranger who was standing next to him and buying a drink while radiating vibes of desperation. Malcolm purposely tuned out the discussion regarding what beer the young man wanted and whether he’d prefer bottle or tap.
Not listening.
His own boy, Everett, had been gone for almost ten years and Malcolm was done with that life. Didn’t socialize with that crowd anymore, didn’t go to clubs that catered to men who enjoyed dominating and boys who loved submitting and he sure as hell never went after any of the guys who patronized his almost nightly hangout. As crappy of a place as Woody’s was overall, it was his social safe haven. He didn’t shit where he ate, or whatever that stupid cliché was.
After what seemed like ages, the attractive, well-built man took his bottle and went to sit down, or play pool, or lean against the wall or whatever it was he was about to do.
Still not looking.
Malcolm rubbed his eyes with thumb and forefinger, sighing as he wondered what it was about the guy that had made him take stock—even as he’d been convincing himself he wasn’t doing such a thing. Yeah, okay, he hadn’t been able to help but notice the muscled biceps and broad shoulders, the strong jawline and how the old T-shirt fit across his defined chest. After all, the kid hadn’t been wearing a jacket.
Unavoidable. That’s all it was.
But now, the young man was gone, and he could go back to sitting, sipping and staring at nothing.