A Early Taste of Christmas 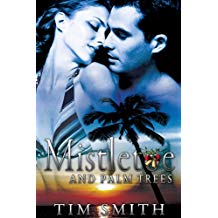 By Tim Smith
Next month I’ll be pushing my newest Christmas Stocking Stuffer from Extasy Books, but this month I’d like to highlight one I released a number of years ago. “Mistletoe and Palm Trees” was the first in a two-part series I did, released in 2010. It was followed by a sequel, “Snowflakes and Palm Trees,” which completed the story arc.
“Christmas in Key Largo, Florida—palm trees, bright blue waters, tropical temperatures, and two people feeling the sting of a bad break-up. When Tom McCoy fled there to forget his latest romantic debacle, the last person he expected to meet was beautiful Brooke Devlin, who is trying to heal from a mishap of her own. Their mutual attraction is strong, but is it real or just rebound? Will their holiday affair last beyond check-out time, or become the stuff Spring breaks are made of?”
The genesis for this story was based on an actual incident that happened to yours truly. I had planned a trip to Florida with my sig other for a working vacation that included some book signings. Shortly before we were to leave, she had an accident and was unable to travel. The reservations were non-refundable and publicity had gone out for my personal appearances, so it was decided that I would go solo. I thought “What if this guy traveled to the Keys alone because he’d broken up with someone, and he meets a woman who is there under similar circumstances?” It was a fun story to write because of the will-they-or-won’t-they aspect. Here’s a sample:
Brooke’s eyes took on a sultry look accompanied by a small smile. “So what’s a lonely girl to do for a week in a tropical paradise by herself?”
“Find an equally lonely guy to bum around with,” Tom answered.
“Where would I find such a guy?”
“They’re all over the place.”
“Maybe I should run an ad.” She placed her hand over his on the table. “Unless you’d like to apply for the job.”
“I’d be happy to provide references.”
She gave him a playful look, one that made her green eyes sparkle. “What are your qualifications?”
“I’m here, I have no plans, and I find you very attractive.”
“What’s your availability?”
“At your service, twenty-four-seven.”
Her look turned sly. “Does that include nights?”
“Of course.”
She laughed. “You’re hired. How soon can you start?”
Tom squeezed her hand. “I just gave notice on my last job.”