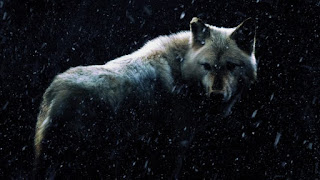 Snow falling. The endless snow that reminds me of the haunted midnight forests of my old Bavaria. I turn my head up to the silver night sky, the glowing iridescent clouds and the snow falls straight down into my cold eyes like a shower of tiny meteors all aglow.

On the crest of the hill, I smell him, it is a big male, a gray wolf such as my Uncle Snorri sometimes hunted and killed and hung on the gatepost of the sheep pen as a warning to other wolves. I smell the wolf. The wolf smells me. We two indolent hunters, passing in the night. His blood is as warm as any, but his nobility protects him from me. We are too much alike. A large furred beast. A small thin woman with snow colored hair; my pellucid face glows as white as the snow, so that without the blood in my eyes I might vanish in the wasteland like a ghost.

He doesn’t know what to make of me. He sees human. But his excellent nose confuses him – the girl standing under the pine tree is not human. Does he feel that? A little out of tune? He must wonder what I am to be so strange. If I wait, yes, he comes now. He can’t stay away. He wants to know. It’s the craft and curse of my kind. What does a nosferatu do best but fascinate?

He comes close to me, as though he were my own gorgeous dog, but then stops. Growls, snarls and shows his teeth to me. I have remarkable teeth too, wolfie dear. I brush the unmelting snow from my icy and bloodless skin and snarl at him showing my long sharp canines and he backs off, baffled.

Now he is frightened of me, because I am small and thin. Just a girl, easy meat and I should be afraid and I am not. He knows that’s wrong. Suspicious. Beware herr wolfie, when they are not afraid of you.

I gauge the distance. One leap. Say, two for the snow. Three if he runs. I would have his neck in my hands and teeth. It’s as hard to attack a wolf as a sheep, because they have so much hair over the throat. You can’t reach the vein at all unless you first kill and then peel them like fruit. It’s a mess.

And besides, aren’t you beautiful herr wolfie? Play with me, wolfie. Look how I’m all alone, and no one to play. I hold out my hand, stretch my fingers. Come. Come, come. He only watches, never taking his golden eyes from me.

I met Daniel on just such a night. I tried so hard to kill him. He won my heart with snowballs.

Wandering the haunted woods near his home in Maine, which forests I loved, he rather smelled of death and depression like a beacon. A crazed and tired mind. What must I have looked like to him standing in the trail in the falling snow. Buxom, ragamuffin girl. Hungry little matchstick girl, with matchstick arms and legs who has lost her matches, preserved in my ever girlhood like a frost maiden.

He never feared for me, because he was so sure I was not real. A drug dream or hallucination. He talked to me in the thickening storm, and I bided my time pretending to listen. I longed for him even as he disgusted me. The snow in his hair like jewels. I took my fatal step towards him, dull eyed I was, whispering when he took up a wad of snow and threw it straight up high in the air. I looked up just as it burst on my face. Masked in snow, I stood shocked into waxwork stillness, sparkling like a Christmas tree. I awoke. I threw snow at him. He threw a ball at me, and again, hitting my face every time. I chased him round a tree; we tumbled together like wolf pups.

I chased after him, in German cursing; far onto the ice, laughing. Throwing snow. Forgetting my fell purpose.

Into the ice he dropped through some fisherman’s hole. Clawing at the snow barehanded, fingernails scratching blood he held on. He discovered he wanted so badly not to die, after all. Because he had to know if I was a real girl.

I came up to him, with cruel slowness, showing him my true nature, deciding it was time to end our game.

His imploring grappling finger tips. I poked at them with the toe of my old tennies. He looked up at me, baffled. I had a notion that his frozen heart, crushed flat would look like a pressed blood flower. It would be my Christmas treat.

My white face reflected in his fading eyes like a star.

What do we know of our lives? Who will save us or why? Who will finally pay the price of our salvation, not once but many times?

As he slipped under the black water I kneeled and reached his hand.


The wolf sees me. I see the wolf. In my hands a big snowball packed tight. It hits him on the muzzle and he barks and jumps back, shaking snow from his eyes. Now he leaves. So. So, go away then, who needs you. Stupid old wolf.

Alone again, rejoicing in the silent music of this cold choir, I give myself over to the storm’s embrace of desolate quietude. Fall snow, cover me. I will not melt you, not even in my cold mouth. Bury me like a proper corpse, on my maiden back, imagining a bridal bed of white lilies, as I am until dawn.