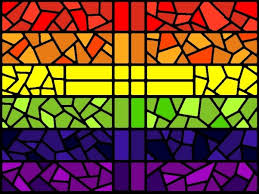 
You rescued me, rescued me
Lord, with a love out of mind
Oh you know I love it when
Everyday I am rescued again

As a queer millennial, I’ve had a complicated relationship with Christianity.

I grew up going to church semi-regularly. It’s a very progressive protestant denomination and the congregation is one that my family has gone to for decades and decades. That’s not really where the complicated relationship began, though, as that was fine.

Growing up, I was best friends with a kid who came from a very conservative evangelical family, and he was right there along with them in all matters of faith. Me being the shy and introverted kid that I was, more often a follower than a leader and always in need of friends, I tagged along to a lot of things with him, including the weekly Wednesday night programming for kids at his church.

I was immersed in a church environment that was very different than my own. Whereas my congregation often preached about being in relationship and conversation with God, my friend’s church was very much of the “these are the rules that God sets out and there are no exceptions” kind of thing. My church didn’t often talk of the concept of Heaven and Hell, so it was never something that really concerned me, but my friend’s church was very clear on Heaven and Hell and who was going where.

Beyond the mid-week groups that went on for pretty much all of primary school, my absorption of his version of faith continued through more avenues. His parents always invited me to pray with them. Most of his friends that I met over the years, right into adulthood, were from church or faith groups. I remember a camping trip we took where at the campfire he asked about my relationship with God and then wanted us to both share our struggles with sin with each other. And I picked up my interest in music through him — I have quite the collection of Christian rock and pop on my iTunes that I still listen to.

It wasn’t until my middle and high school years that I started to run head first into this matter of faith. In grade eight we learned about evolution. I accepted the science and had no trouble believing it. My friend ridiculed me for believing we came from “monkeys” and that I should have more faith in God. However, I was easily able to absorb evolution into my faith. If there is a Creator and They have had a guiding hand in humanity, could evolution not be a tool through which that happened?

As I got a little older, I started to struggle with this Heaven and Hell thing. I just couldn’t wrap my head around it. I was constantly told that I have to accept Jesus into my heart in order to be saved and go to Heaven. I remember uttering the words once when I was a kid, but out of sheer fear of the prospect of going to Hell, not out of a love of God. I mentioned this to the mid-week kids’ church group and they made a big deal out of it like I had been saved — and in their eyes I guess I was. I didn’t like it.

The struggle of Heaven and Hell, however, in senior high was about the idea of who goes where and why. If all you need to do to get to Heaven is to accept Jesus into your heart and repent your sins… well, think of the most evil person you can think of. Now imagine that person having a deathbed conversion of faith, one that allows them into Heaven under these rules.

Now imagine a doctor who has devoted their entire lives to saving people from disease. The number of people they’ve saved is in the tens of thousands. They even invented a vaccine for a deadly disease and released it for free to the world in order to save lives and they make no profit off of it. However, an evangelical has never shared the love of Jesus with this person, so they have not accepted Jesus into their heart, and so they are condemned to Hell.

That doesn’t sit right with me.

So I decided that the concept of Hell didn’t make sense and therefore it must not exist. Does Heaven exist? I don’t know, but I don’t have an issue with believing it does.

Of course I couldn’t tell my friend this. So I played along and said the things that he needed to hear.

It wasn’t until years and years later that I learned my church has a very similar position. Everyone gets to Heaven, but some believe there may be a sort of limbo waiting area for those who have done bad things — they spend some time there before moving on.

After finishing university, I got a job at my church doing youth work. Though I was working in a faith environment, I tried to stay out of faith things. I had my own version of my faith that, according to my friend, is wrong and bad. I lacked the confidence to say what I believed, for fear that it would be the wrong thing. To this day, the only person I’ve had this conversation with is my husband.

Though I enjoyed the church job, there was heavy pressure to enter into ministry. Indeed, when I left that job, almost everyone at the church thought I was leaving to go to ministry school. Whenever I occasionally make an appearance, I’m still explaining to people that I’m not a minister and I never was going to be one.

After leaving that church job, I started to explore my sexuality. Interestingly, and perhaps not so coincidentally as I like to imagine it to be, I became involved with a queer ministry in the wider church as part of their board. And when I first started exploring these feelings I’d been running from for so long, the first and only person I spoke to was the minister at that queer ministry. So obviously faith had been an important part of my life if that was who I turned to.

When I moved in with the man who would become my husband, we had great support from my church, his church, and the Bible study group he was part of. However, as it became clear that this wasn’t a phase and we were going to stay together, the pastor at his church made a few comments that made it clear he didn’t approve. Shortly after that, one of the guys in the Bible study group asked my husband to read a Bible passage about how gay men don’t get into Heaven, and then shortly stopped talking to us after my husband stayed with me.

Still, my relationship with my church endured. That queer minister became the minister at my congregation. It was made clear to me that my relationship with God is my own business. I didn’t have to explain anything or prove anything to anybody. I got involved with the church a bit again on a few boards, but found that I never really felt like I was part of the congregation again. I’m personal friends with the minister and I still send my monthly donation to the church, but that’s about the extent of my involvement.

I don’t think the answer is to go to another church. I have no inclination to do so whatsoever. But I still don’t have any urge to go to my own church.

Oh right, coming out. I did that. Eight years ago.

One of the people I had to tell was that conservative evangelical Christian friend. He was the last person to tell. I was more scared to tell him than I was to tell my family. I honestly didn’t know what to expect.

He had one of the most positive reactions of everyone I’d told. We immediately had coffee with him and his wife. We’ve had board game hangouts. While we don’t see each other that often simply because we lead very different lives, I’ve never felt that he disapproves of our relationship. (His wife made our wedding cake.) I also don’t get the sense that he’s doing that “love the sinner, hate the sin” crap that so many Christians do.

So where do I sit with my faith?

My queer identity hasn’t been a problem in my church, but it’s been a problem in other areas of my faith and my husband’s faith. My being a millennial, I think, has been the bigger struggle. If I’m not sure if going to church is necessary — if I’m not sure what my own beliefs are — then do I really need to go to church? Is there a place for me there?

Perhaps. Perhaps not. I still struggle with that.

The minister I worked with when I was on staff frequently said “God loves you” in her sermons. That was the core message she wanted people to go home with. God loves you. End of sentence. No catches or caveats or exceptions or conditions. God loves you.

That’s the message I carry with me everywhere. Anytime I question things or struggle with things, I remember those three words. God loves you.

And because of that, as I explore my place in this universe, I know I’ll be okay.
Posted by Cameron D. James at 9:16 PM