Exciting news, Grippers. Following the fabulous success of the VIKINGS box set, all the stories have now been released as a series, including my very own Brandr 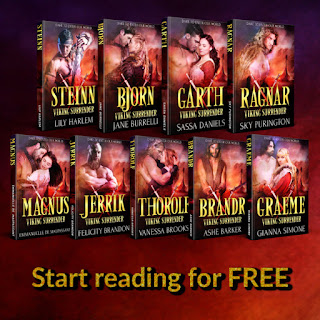 Love hard-muscled, dominant heroes? Love Viking romance?
The steamily seductive Viking Surrender series (first released as the 'Vikings' boxed set) has hit Amazon with brand-new epilogues... so you can find out 'what happens next' for all nine couples.
If you're yet to explore this gorgeous set of shared-world romances, filled with scorching scenes of sexy sizzle and supreme alpha hotness, you've a real treat in store.

And.... you can download the first volume totally FREE => viewbook.at/VikingSurrenderSeries

For a limited time, all the titles are on sale, and you can devour them in Kindle Unlimited.

A horde of battle-hardened warriors.
A village at the mercy of its enemies.
A harrowing bargain struck for nine reluctant brides
Life is perilous and the future uncertain, but each Viking has sworn protection, and there are no lengths to which a man will not go to safeguard the woman he loves.

And to whet your appetite further, here's a  NSW excerpt from Brandr... Enjoy. 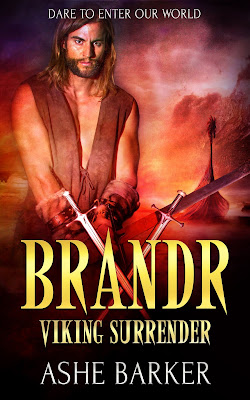 The switch split the air again, the piercing whistle sounding the instant before willow connected with soft, feminine flesh. Eithne let out a high-pitched shriek, and both feet came up.
“Be still. And settle.” He did not command her to keep her feet on the floor, she could no longer reach in any case.
Eithne panted, struggling to assimilate the pain. Brandr waited, allowed her a few moments’ respite in which to collect herself, then he delivered the next stroke.
Beyond screaming now, Eithne hissed and wept into the blanket. But she remained still. Brandr did not draw the punishment out—he was almost as keen as she would be to see an end to this. The final four strokes, two to each thigh, were administered in quick succession, then he tossed the switch on the floor.
“You may get up, now.”
Eithne did not move. She was panting hard, still crying softly, her small fists clenching and unclenching in the rough wool blanket. The stripes on her bottom and thighs glowed like beacons in the guttering lamplight. Never had he seen a more beautiful, more sensual vision than this, and his cock throbbed solid within his trousers.
He had to have her. It was that simple. If he did not, his balls would surely shatter. Or worse, shrivel to dust.
Brandr loosened his trousers to free his swollen cock, then lifted her right knee onto the edge of the chest in order to fully open her to him. He placed the crown of his erection at her entrance.
“Eithne…?” He growled her name, seeking her consent, though not entirely certain what he would do if she did not give it. He could not force her, but neither could he bear to wait.
“Please…” she whispered.
He leaned forward, nudged his cock a fraction deeper. “Eithne?” he repeated. “Little Pict…?”
“Please, I want you… Now.”
He needed to hear no more. Brandr rocked his hips, and his cock filled her. He drove deep, groaned as her walls convulsed around him, squeezing and caressing and welcoming his intrusion.
He withdrew half his length, then slammed forward again, balls-deep.
Eithne moaned, though not in pain, he was certain of that. Her fists relaxed, and he leaned over her, lacing his large fingers between her delicate ones. He drove his cock forward again, measuring his thrusts to her throaty response. She seemed to appreciate the harder, faster strokes, so he delivered more of those, schooling himself not to lose control. He would see her sated, her reward for the courage she had shown, the trust and fortitude.
He released her hand and reached under her, seeking the sensitive nub he knew would send her flying. It took just two well-honed caresses across the tip of her nub and she shattered beneath him. Brandr waited a few moments more, just enough to be sure, then he let out a hoarse shout of his own. His balls cramped, then he stiffened, went quite still as ropes of semen filled his Pictish bride.


Yes, he decided, as his passion ebbed and his senses returned. Eithne of Achnaryrie would suit him very well indeed.