Welcome to Nancy Hunter, author of Taste of Liberty, out now from Cerridwen Press:

The wonderful ladies and gentleman who have invited me to join their blog this week made some excellent points about the state of America’s health care system. And despite differing views, I think most would agree that all Americans do not have equal access to health care, medicine, and health insurance. What needs to change to make that happen? Our priorities. Citizens, elected officials, and lawmakers have to decide our access to quality health care is more important than profits, lobbyists, and campaign contributions.

We as Americans also have to face some truths. One is that our government does indeed pay into the healthcare system. Billions of tax dollars go into the system each and every year. In fact, the US government pays more per capita into its health care system than our northern neighbor, Canada, pays into theirs, which is *gasp* a socialized medicine system.

And while some believe that the free market system keeps our health care system more competitive and therefore more effective, another sad truth is the statistics don’t bear out this claim. In a 2006 report from Save the Children, an extensive study revealed that the US has the second worst infant mortality rate in the developed world, ranking only above Latvia. The report stated the main contributor to this abysmal ranking is that “the United States suffers from disparities in access to health care”. So, bottom line - while we have more neonatology beds and specialists and equipment than other developed nation, we can’t save our babies if they don’t have access to these phenomenal resources.

Okay, not-so-subtle segue alert! My Cerridwen Press release, which is an historical romance with a paranormal twist, is set during the American Revolution. The heroine, Liberty MacRae, becomes a healer and medicine woman for the Ocanneechi Indian tribe while living with them so she can learn to track and destroy her enemy, the brutal British commander who killed her father and brother. Below is the pertinent information and an excerpt from the book that just came out Thursday! I hope you’ll check it out. 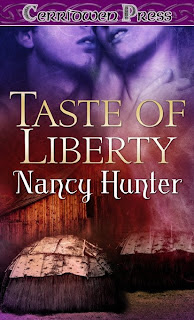 Taste of Liberty
by Nancy Hunter
(click on the cover for more information)
Blurb: In a time of war and hope, loss and redemption, death and rebirth, tragedy unites two enemies who seek vengeance and find love, only to learn that it was never their destiny to be together…
Liberty MacRae, daughter of an American Revolutionary, and Sebastian Cole, a British soldier, share a vendetta against the brutal British commander who killed their loved ones. Each brings a special gift to their quest – Liberty has a second sight that allows her to predict death, and Sebastian is a Fated One, a man who died before he could kill his enemy and has been sent back by the spirits to complete the task. When they fall in love, they have to find a way to defeat not only the murderer, but destiny as well - a destiny that demands that Sebastian either forfeit his life to defeat his enemy or forfeit his soul. Can they find a way to change their destiny before Liberty’s most harrowing premonition - that of her lover’s death - comes true?

Sebastian was silent.
Libbie couldn’t tolerate the distance between them. She needed him to hold her and look into her eyes the way he had at the inn, to make her feel as safe now as she had then.
“At the inn, you were going to tell me something about the night we met.”
He leaned toward the mantel for support but winced when his shoulder brushed against it.
“You can tell me while I check that.”
“No, it’s fine.”
“I’m in a better position to judge that than you are. My skills saved your life in that cave. You trusted me then,” she told him as she stood and stepped in front of him. “Trust me now.”
Her hands trembled as she reached for his tunic and lifted it over his head.
She noticed bruises on his neck and gently touched one.
“A souvenir from Norton,” he answered her unasked question. “No damage done.”
He did not pull his gaze from her as she reached toward his shoulder but he lifted his hand in the air to protest. She slowly pressed her fingertips against his. Sparks danced between them as she pressed the length of her fingers to his, then flattened her hand until they stood palm to palm.
Sebastian pressed his free hand against the small of her back and pulled her body against his. He moved his face slowly, carefully, toward hers. She stopped breathing as their lips touched, then pressed more firmly together. His mouth was strong and demanding. She responded in kind, blocking out everything in the world except the warm feel of him.
He moved his mouth over her cheek and chin, planted gentle kisses along her jaw, ran his tongue down the length of her throat. With one last lingering kiss he lifted his head and looked into her eyes.
“You made me feel alive that night. I can’t explain to you what that meant, what it means to me to be near you, to touch you, taste you.”
She reached up to wipe a tear from his cheek. He caught her hand and kissed it, then closed his eyes, pressing out more tears.
“But knowing me put you in danger. I had to get away from there, from you, to protect you, to keep you safe. God, I wanted to give you that but I couldn’t.”
“No one could.” She leaned against him. “I know how fragile life can be. I know that no one can keep me safe every minute of every day. But there are things you can give me. Important things.”
His lips nuzzled her ear. “Tell me,” he whispered.
She swallowed hard. “This heat. This passion.”
He ran his fingers down the length of her spine. “Is that what you want from me?”
She nodded. “Since the moment I met you.”
“Libbie, I know I don’t deserve you. I don’t deserve these feelings you bring to me. But I was so afraid I’d lost you tonight. I prayed I could hold you just one more time, even though I know it’s wrong of me…”
“No, Sebastian, this is right. So right.”
Their lips met again in a deep kiss that left her quivering. She pulled away from him just long enough to let him lift her shift over her head and drop it to the floor. His gaze roamed over her, leaving a heated blush in its wake. He pressed his bare chest against hers as he gently kissed her eyes, then nipped at her earlobe. He ran his tongue over the pulse in her throat.
Libbie gasped at the small, scintillating touches.
Sebastian stroked her back, her buttocks, her thighs, pausing only to pull off his own breeches. Then he bent lower until he was kneeling in front of her. With his upturned mouth, he kissed one breast, then the other, flicking his tongue teasingly over her throbbing nipples.
Libbie moaned as he pulled her down to kneel with him, his hands caressing every inch of her. Her unpracticed touches were less gentle as she rubbed his dark chest hair and small, smooth nipples, which rose to hard points under her fingertips. She lingered over his rippled stomach and slowly traced the soft line of hair that began under his belly button.
With one hand supporting her back and the other wrapped in her hair, he crushed his mouth against hers. His erection pressed insistently against her belly. She leaned back, pulling him toward her. Her desire for him had turned into a feral, instinctive need to feel him deep inside her.
He stopped, suspending her just above the blankets. “Are you sure? There will be no turning back.”
“I don’t want to turn back. The past is full of pain. I just want this time, this place. This moment with you.”
“I’ll be gentle, love.”
She dug her nails into his back. “No! Not gentle. I want your passion. Make me feel it. Make me burn!”
Find out more about Nancy at:
http://www.nancyhunterbooks.com/
www.myspace.com/nancyhunterbooks
Posted by Cindy Spencer Pape at 9:56 AM