One Dependable Man-available in PRINT! 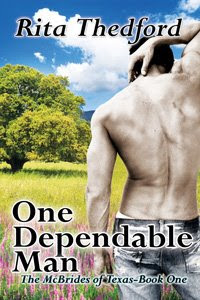 As most of you know I'm a strong advocate of e-books...they are cheaper, greener, and more convenient but PRINT is nice, too. Today I'm celebrating the release of One Dependable Man, a contemporary western set in Texas. This book is written under my OTHER name. Yes, I have TWO.

This was released in January as an ebook by The Wild Rose Press and now it's available in print, too. I think I see a book signing in my future. That'll be FUN.

Here's a blurb of One Dependable Man, Book One, The McBrides of Texas:

Sunny Forester gave up her dream of finding a dependable man a long time ago After spending most of her life cleaning up the messes of lazy, shiftless Forester men she’s convinced that such an animal doesn't exist. When hunky rancher Matt McBride two-steps his way into her diner, though, all her preconceived notions about men begin to change. Vowing to repay a debt he owes to her dead brother, Matt McBride sweeps into the old diner and straight into Sunny's heart. He serves up a hefty helping of Texas-style lovin' with a side of spice for dessert, proving to this stubborn Texas woman that there is such a thing as a dependable man.

Shaking himself out of his rage, Matt turned to gaze at the assortment of diners who applauded him. He smiled back in response and executed a short nod as Sunny disappeared through the kitchen doors. Once the furor began to die down, he followed her.
Matt McBride, unlike the rest of the McBride clan, had never possessed a raw, unbridled temper. He was easy-going to a fault. It took a hell of a lot to anger him to violence but he hated creeps who messed with women. The harassment of this particular woman sent him over the edge.
Happy had once saved his life. Could he do anything less than help his sister?
Yeah, keep telling yourself that, dumb ass.
Over the past few weeks everything had begun to change. It wasn’t just about paying a debt to a dead friend anymore. It was about the dead friend’s sister. Hell, maybe it had always been about her and he just hadn’t realized it until now.
He wanted her so bad he ached.
Damn! What a mess.
Pushing through the swinging doors, Matt stopped just inside the kitchen and watched Sunny slowly flip four hamburgers on the grill. Knitting his brows at the stiffness of her posture, he glanced at Buck who grinned slightly, shook his head, and shrugged.
Turning away from the heat of the cooktop, Buck spoke in a gravely voice to no one in particular. “Guess I’ll get on out there and see if there’s anything to be done.” On his way out, he glanced up at Matt with what could’ve been a spark of pity. He clucked his tongue a couple of times and stepped out.
Matt cleared his throat, whether from nervousness or the need to wrap Sunny up in his arms, he wasn’t sure. She was stiff and unyielding and he wondered briefly if it was because she’d been scared.
He should’ve known better.
“Did he hurt you, sweetheart? Are you—?” Further questions went unanswered as Sunny spun around and pointed her spatula at his belly. He found himself staring into the blazing blue eyes of one hundred and ten pounds of pissed off woman.
“How dare you interfere?” she snapped. Her face was red and she was mad as a hornet. “This was none of your affair, McBride. I was handling everything just fine on my own before you stuck your nose in my business.”
She flung his gallantry right back in his face. Matt’s temper ignited. “You were, were you?” he sneered as he bore down on her. “Just how much manhandling were you gonna let yourself take before you booted his ass out of here, huh?” He moved in closer and Sunny took a step backward and then another. He scowled at her as she bumped up against the nearest wall. Her breathing quickened and her breasts grazed the front of his shirt.
Damn.
Lust whipped him like a lash. “Didn’t you realize those men were drooling at the sight of you all bent over the table like that? Your cute ass in those tight jeans is pure enticement and you know it. Did you ever once think maybe it’s dangerous for you to work this shift?”
Sunny gasped. “Are you calling me a tease?”
“No. I’m calling you stupid.”
She blinked up at him and Matt realized he was gripping her arms. Instantly, he gentled his hold and saw hurt flare to life in her eyes.
Her expression deflated Matt’s anger instantly. He cursed his own ability to act like a horse’s behind. What had he expected? Gratitude? Yeah, that’s what he’d wanted. Maybe he’d wanted her to throw herself into his arms like a weeping damsel and plant sweet kisses all over his face in gratitude.
He should’ve known that wasn’t Sunny’s style.
“Ah, hell. I’m sorry, darlin’. You’re strong and tough, but even you have your limits and you were out of your league tonight. They rattled you. Look at you. You’re shaking like a leaf. You’re tired and stressed out, and the prettiest damn thing I’ve ever seen.”
Sunny gasped and looked up at him with those bluebonnet eyes and he just lost it. With a low growl, he caught her in his arms and dove for her parted lips. Nipping at the lush fullness, he teased with his teeth, his tongue. He drank her sigh and plunged his tongue into the dark, sweetness of her mouth. The subtle scent of her rose up to tease him and he changed the angle of the kiss, breathing her in.
Her breasts, full and lush, teased through the thin barrier of his shirt and unable to stop, he rubbed his chest against her, desperate for a firmer touch. His erection throbbed against the fly of his jeans. He pressed it against the curve of her belly and rotated against her softness. She made a tiny, whimpering sound as he slowly drew away and stared down at her startled face.
Muttering a curse, he raked his fingers through his hair. He was moving too fast but he couldn’t help himself. “You’re not stupid. I didn’t mean what I said but I’m not sorry I kicked that guy’s butt.”
Making a tiny choked sound, Sunny drew away but Matt put his hand on her shoulder to stop her. “Yeah, I’m big enough to apologize but I’ll be damned if I’m going to say I’m sorry for kissing you.”
Sunny looked at him, long and hard, and he returned the gaze without flinching. He wasn’t a bit surprised when she turned without a word, opened the back door, and stepped out into the night.
Posted by Regina Carlysle at 10:40 AM