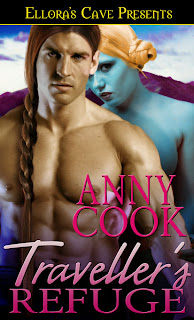 Framed and running for his life, Traveller Devereaux decides to follow his missing brother Dancer, using the clues he left behind when he disappeared. They lead Traveller to the mysterious Mystic Valley where the people are blue, the flora and fauna are decidedly odd, and the mating customs are definitely different.

On his journey, he is injured in a serious accident that traps him in a cave with his best friend, Bishop. Bish finds the hidden tunnel leading to the valley and takes Traveller to safety. Trav's slow recovery allows him much-needed time to adjust to the valley and fall in love with Wrenna, the woman chosen as his bond mate. When he finds out that she is related to the man who murdered his parents and siblings, he must choose between the woman he loves and her murderous grandfather.

Excerpt:
Two mornings later, sunrise broke across Mystic Valley, throwing beaming rays of light over the training field. Tyger and Llyon danced the deadly Grimahr Dance against Arano and Arturo in the pearly mist rising from the wet grass. Arturo’s first level students stood attentively outside the marked circle, intently studying the moves of the dancers as they demonstrated the flowing combinations of individual moves the students had practiced in class. The contrast between the two teams, Ty and Ly with their flaming red warrior braids and pale green shardas and Arano and Arturo, dark knights with snapping black braids and dark gray shardas, made it easy to pick out the ways each team worked together.

Wolfe lounged against the wall of their training hall, well back from the action and absently watched the fluid movement in the circle while he wrestled with the knowledge Wrenna had dumped on him. As far as he could tell, she still hadn’t informed Dai or Llyon that she had begun schalzina. Wolfe struggled with the unpalatable choices he faced—to break her confidence and tell Dai himself—or accept the responsibility of serving as her healer. Neither choice was to his liking.

On the field, Arturo flung up one muscular blue arm and shouted, “Hold!” The action stopped immediately and his fellow dancers relaxed around him. After a brief muttered conversation, Ty, Ly and Arano nodded and walked off the field, heading for the bridge over the river. Wordlessly, Wolfe joined them as they headed for the main house and breakfast.

Llyon shot him a curious glance, quirked an eyebrow and waited for an answer. Wolfe shook his head in reply and broke off to go to the bedroom he shared with Hawke. He would have liked to bounce his dilemma off Llyon but Ly was no idiot. He would immediately deduce the details and how was that different from just telling him straight out? In any case, Llyon had strong feelings about Wolfe’s refusal to accept his healing skills. Certainly, he wouldn’t be a sympathetic ear.

When Wolfe and Hawke joined the others in the kitchen for breakfast, he saw that his agonizing had been wasted after all. Wrenna sat at the table sipping on wachaz tea, the standard remedy to suppress early schalzina and stomach cramping. The strong scent of the tea filled the air, nearly overpowering the other familiar odors of baking bread and sizzling hopper slices on the griddle.

From Wrenna’s rebellious, stiff posture, it was clear that she was annoyed to be the subject of discussion among the males milling around the kitchen. “I still don’t see where this is your business. Any of you!” she observed acidly, shaking her head for emphasis. Her loosely skewered topknot of fine red silken hair threatened to tumble down. Wolfe squelched every clamoring instinct and reached out to firmly anchor the thick braid into a neatly wrapped knot. Wrenna ignored his ministrations as she pointed out, “Not a single one of you can change the circumstances. And none of you can possibly empathize with the symptoms!”

An embarrassed silence fell over the room. Wolfe delicately cleared his throat and carefully pointed out, “We love you. We’re concerned for you. It’s a built-in part of being a male sib.”

When Wrenna turned her head to look up at him, her eyes met his and after a brief war, hers fell first. “It would help a lot if every one didn’t make such an issue of it,” she admitted grudgingly. “It’s difficult enough when such a personal feminine problem is so public. Now I know how Eppie felt when she was waiting for Dancer. I don’t walk around discussing every instance when one of you has an erection!”

“Maybe you should,” Dai said with a brief twitch of his lips. “It would be more honest than ignoring it.” Her brothers shifted uneasily under the healer’s sharp green eyes. Then Dai shot a glittering rapier glance at Wolfe. “I will see you after breakfast in your Papa’s office, Wolfe. We have much to discuss. As for the rest of you…”

“I’m sure we all have somewhere to be,” Tyger interjected hastily. “Hawke and I have a meeting about a loom—”

“I have patients to visit—” Ly offered immediately.

“I’ll be at Silence’s, helping her get rid of Homer’s stuff—” Arano jumped up and started passing out the platters as Dai filled them with steaming peekie eggs and hopper slices.

Arturo slipped into the kitchen just as Dai finished up. Silently, he sat next to Arano and applied himself to the task of eating. After a thoughtful look at his bowed head, Dai merely asked, “Will you be available to fix breakfast for the younglings, Arturo?”

With a curt nod, Arturo agreed.

“I will wake them before I meet with Wolfe. Since your Papa has taken your Mama down to my retreat to rest, I believe that eating in two shifts will work best. Any objections?” he inquired mildly. Merlyn and Jade didn’t raise stupid children. Everyone concentrated on eating.
Posted by anny cook at 1:13 PM