Tell me your name... 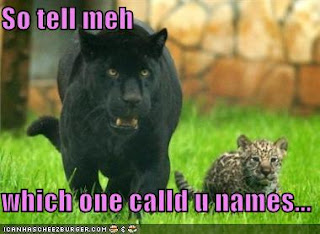 It's funny how we associate certain names with certain personalities. Names that were common male names in other eras are considered female names now. Names that were indicative of brawny macho masculinity are now thought to indicate wimpy nerdiness. Solid old boy names like Bob and George and Harry are now reserved for... well for solid old guys.

When naming a character we as writers can use some of those characteristics as a type of short hand to tell our readers something about the character. Orrrr, we can cast our character opposite of expectations by naming them something unexpected. Orville doesn't immediately strike one as the heroic type. Hmmm. Let's see what we could do with that. Orville.

First, though, let's give him a last name. There again, surnames tell a story. So, with Orville as a first name, a sturdy old-fashioned first name, we can go two ways. Stick with a down the middle of the road surname like Smith or Jones--or go for something a little more unusual. What shall it be? For myself, I just never seem to stick with the norm so I think that Orville's surname is... Peskowitz. There ya go. Orville Peskowitz.

Now what do we know about Orville? What do you suppose Orville looks like? I believe that Orville has sandy blond hair just long enough to wear in a clubbed pony tail, kind of like that guy in The Princess Bride. His eyes are chocolate brown...a deep dark chocolate. Yummm. Orville is almost six feet tall, but not quite. He has a barrel chest and excels at shot put in his spare time. He renovates old houses for a living and is particularly skilled at carpentry. Oh yeah. The important stuff. He's solvent, intelligent, patient, and single.

Now about that name... he was named Orville after his maternal grandpa. And Grigori after his paternal grandpa. So with a name like Orville Grigori Peskowitz, what do you suppose his friends call him? Anything he wants them to call him! Mostly they call him Orgi, a holdover from a little publicized event from high school. Nope, he doesn't want to discuss it at all. While the nickname lives on as a reminder of immaturity, he's all grown up now and past the foolish choices of the teen years.

Orgi drives a truck. Blue, Ford 150 with a matching cap on the back. He wears jeans, white tee shirts and loves cowboy boots.

There ya go. Whatcha think? I can guarantee you won't likely run into another hero character named Orville...