What's in a Name? by Mona Risk

What’s in a name?

When I was pregnant with my first child, I was sure it would be a girl. I called her Mitzie, talked about her in the feminine and even bought her a few pink dresses. At the time, there was no ultrasound to know the baby’s sex before birth. A month before delivery, my mother suggested that if, by any remote chance, I had a boy I should remember to call him George because all first-born boys in my family were called George, my father included. Around the same time, my mother-in-law sent me a letter saying that if I had a boy, he absolutely had to be called Leo like his paternal grandfather. Both grandmothers debated together and agreed the baby should be called Leo George. Both grandfathers couldn’t care less about the baby’s name.

Hey, how about the mother? Did she have any say in the matter?

There was no doubt for me that my baby would be a girl, but what if my intuition went wrong and I had a boy? To be prepared I studied both family trees and eliminated from my list every name that belonged to either family. Together my husband and I chose a boy’s name and kept it secret.

Sure enough, my intuition failed big time and I had a boy. His name was a first for both families. Both grandmothers fussed about the baby and forgot their arguments about names.

So the name was not as important as the person, the character.

I follow the same principle when I name my characters and stay away from relatives’ and friends’ names so that no one thinks he/she can recognize themselves.

In my novels, my heroes are all foreigners and my heroines, all American. I have two Russian heroes, Sergei and Fyodor, three French heroes, François, Olivier and Luc, an Italian, Roberto, a Greek, Stephanos (heroine calls him Steve) and a Puerto Rican, Marc (his relatives call him Marquito).

The names chosen for my heroines lend themselves to the story. In To Love a Hero, Sergei likes to transform Cecile’s name into a Russian one, Cecilya. In one of the first scenes of French Peril, François can’t remember Cheryl’s name, and uses the French endearment that always works well for this playboy. He calls her chérie and she smiles, thinking he knows who she is. In that same book, I had a lot of fun playing with names for the secondary characters, mostly foreign students: Adriaan is Dutch, Roberto Sicilian, Juan-Pablo Spanish, Karl German and Chuck Minho Chinese. I made sure not two names started with the same letters.

Two days ago, I was at my doctor for a checkup. Everyone there knows I write novels. I distributed bookmarks for French Peril. The nurse, a lovely woman called Jocelyn, asked me if she could be in my next book. I needed a name for a nurse and told her I could use a Jocelyna. But then, Gaby, the clerk who books the appointments, protested that she too deserved to be in my book. She always gives me immediate appointments. This woman is a gem. For her I created a Gabriella in my current whip. Now, the whole staff is impatiently waiting for the book where Jocelyna and Gabriella will hold a role.

Names are important. They become synonyms of a story. If I say Scarlet, won’t you immediately think, Gone with the Wind? But it’s the character that makes a name immortal. 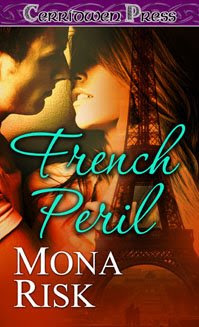 http://www.cerridwenpress.com/productpage.asp?ISBN=9781419917189
Blurb:
What could be more exciting for a young American architect than to live in a French chateau owned by a young count and to work on the restoration of a chapel in the Loire Valley?
But when her professor is poisoned because he knew too much about a missing statue, Cheryl's summer job changes into a dangerous treasure hunt and Count François is faced with a difficult choice:
Are the statue and his chateau worth endangering the life of the impetuous young woman who's turned his life upside down?
Review Your Book Review, 4 Stars
Mona Risk, author of French Peril, offers her fans another great read. In French Peril, she creates a swirling air of mystery around the excavation of a chapel ruin. Murder, mystery, and intrigue seem to follow Cheryl as she assists Francois on his project…. Risk has a talent for character development. Cheryl is a multitalented, impetuous person. Francois is romantic, determined, and very protective. French Peril is a great contemporary romantic read.
The Romance Studio Review: Overall rating: Sensuality rating: Mildly sensual
This is a wonderfully exciting romantic suspense novel. The characters are appealing and the setting is very romantic, a chateau in the Loire Valley. There is an interesting cast of characters. The plot is full of action and the reader is never sure who is on the side of good or evil. As a matter of fact, very few are who they appear to be. The love story between Francois the Comte and Cheryl is very engrossing all on its own. Cheryl is a very earnest grad student. I really liked her character; she has spunk as well as brains. The various plotlines converge into a very exciting climax that will surprise the reader.
Posted by Phoenix at 12:09 AM