First off, the Grip crew would like to thank Ashley for stopping by today and lending her voice to the topic. Here's what Ashley has to say about Second Chances:


When I was asked to be the guest blogger at The Grip this week and we came up with the topic of second chances, I was thinking about romantic second chances. Of course, my mind revolves around romance, in the real world and in the imaginary world of my books. I wasn’t thinking about other kinds of second, or even third chances.

But as I’ve been reading The Grip this week, everybody’s reminded me that there are many types of second chances. They’re not all about love and romance, even though those are some of the best types.


I’ve had second chances in more than just love but in love as well. As I mentioned in the discussion Thursday on The Grip, I got a second chance at my day job. Many years ago I had been promoted to manager, and then I was demoted. I was devastated. I was absolutely certain that if I wanted to advance in my day job career, I’d have to move to a different place. But I didn’t for many reasons. Lo and behold, about six months ago, I was promoted to manager of the same department again. I hope and pray I don’t blow it again. I’m grateful for another chance, but I’m also scared to death I’ll blow it again.

I think the second time around at love is very similar. Once burned, once hurt, we’re afraid to try again, with the same person (or job) in particular, but often even with a new person or new job. We know we failed once and we know how terrible that feels and we don’t ever want to feel that way again, so we’re tempted not to even try, to protect ourselves by backing away and wrapping ourselves in a cocoon.

When we’re brave enough, however, we put aside our fears, or at least try to muzzle them, and try again. Believe me, I was scared to death to accept the promotion again because if I fail a second time, I’ll be even more devastated, more humiliated.

But was the option of not taking the chance, of turning down the promotion, better?

That’s giving into defeat up front. That would have been to bury my dreams. Not only would it have hurt me, it would have been detrimental to my family, because face it, a promotion comes with a pay raise and I’ll have more disposable income so my kids can live the American Dream – well, at least more than they would have otherwise.

But we’re primarily romance readers and authors here, so our discussions usually focus on the romance aspect of things.

I can also relate to romantic second chances. My husband and I have had more than two second chances. As some of the other posters who have gone before me have wisely said, marriage is full of give and take and forgiveness and learning to live together all over again.

First, I broke up with my husband before we were ever married. We weren’t even officially engaged. He went into the Air Force and was stationed out in California. I joined the Air Force and was sent south to Mississippi. I dated other people. I’m sure he did. And then, we somehow got back together and married, a fact our kids are eternally grateful for.

After we’d been married for many years, we almost divorced. We came very close to the big D. The healing process was horrendous, but here we are fifteen years and one more child later, still married.

It wasn’t easy and it wasn’t fun some of the time, but overall, it’s been well worth working out our differences, of taking our second chances.

I often write about second chances in romance because there’s a lot of angst and a lot of meat so readily available for these types of stories. Because of this, it’s an excellent premise to get sucked into a short story fast.

My most recent release “Submissive Dreams” features a divorced couple who get a second chance at love.

Is it worth it?

It must be worth it as so many people give love a second chance.

If you’ve ever had a second chance or or if you know somebody who has, you’ll already know this.


Here's a look at one of Ashley's books: 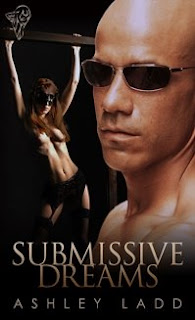 Submissive Dreams
By Ashley Ladd
Available NOW at Total-E-Bound
Click on the cover for more information.

“You’re not gonna fuckin’ believe this,” Lilli whistled long and loud while she shook her head. The late afternoon sunlight filtering through the grimy windows glinted off her multi-coloured hair streaked blonde and red through her auburn locks.
Used to her friend’s over-ebullience, Stacey Cooke gave an obligatory smile. However, she didn’t blink an eye. “Uh huh.”
“No, I mean it. This is fuckin’ unbelievable! Sit down. This is wild.”
With an arched brow Stacey double checked her seating arrangement. “I am sitting. So what is it I won’t believe?”
Reverently, Lilli placed her laptop atop Stacey’s legs. “Look closely. Recognize anyone?”
Stacey gulped. Naked bodies writhed together, kissing, caressing, shagging their arses off… Women were tied up while men enjoyed their wicked way with them.
“Uh, why do you want me to look at this?” Despite herself, she couldn’t stop staring at the huge hard cocks fucking the moist pussies, from creaming her own panties.
“Come on. Don’t you see it?” Lilli jumped up and down as if panicked. She jabbed a finger at the screen.
“Look at the man’s face. Don’t you recognize him?” Her friend’s voice reverberated with frustration and excitement.
Stacey hadn’t exactly been studying faces. Those muscles, those cocks were mouth-watering scrumptious and she was squirming on her chair.
Lilli tapped her pointy, chipped fingernail on a man’s face
Stacey’s eyes dilated on the face she knew so well. It went blurry before her eyes and her heart skipped several beats. She couldn’t breathe. It couldn’t be. She had to be hallucinating. Or this was a trick. Was it April 1?
“That’s Brandon.”
The caption under the bald-headed man proclaimed him to be “Tyrannosaurus Rex”, but it was unmistakably her ex-husband—on steroids. Or maybe some great graphic air brushing was in play. Still, she laboured in disbelief as she struggled for air. “Th-that couldn’t be him. He’d never, ever…” Gobsmacked, she couldn’t finish the sentence.
Lilli leaned close enough to kiss the screen. “Dominate women? Tie them up? Shag them in public? Be a porn star?”
All of the above. Stacey couldn’t help herself and so she stole another look at the man’s face. It certainly looked like Brand but she still couldn’t wrap her mind around all this. Hell no! Her husband couldn’t be fucking other women. Especially not so many other women where everybody could see him. “They say everyone has a double…”
“If it was me, I’d be finding out for sure.” Lilli waved a dismissive hand and paced before her.
The hurtful truth slapped her between the eyes, and she dragged in a deep breath. She uttered, “We’re divorced. He can do whatever the hell he pleases.”
Here's where you can find Ashley on the web:
http://www.ashleyladd.blogspot.com/
http://twitter.com/ashleyladd
http://www.myspace.com/ashleyladdromancewriter
Posted by Cindy Spencer Pape at 6:22 AM