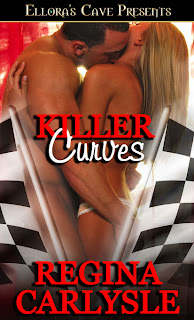 Mark your calendar's for my September 5 release Killer Curves. This is an Ellora's Cave contemporary romance.

After the death of her husband in a fiery crash, Carrie Martin Salem left the world of the racing circuit and retreated to Texas vowing to live a quiet and safe life. But old memories dig deep, leaving her longing for the friend she left behind. From the moment, J.T. Sims steps from the cab of his truck, Carrie knows it’s more than friendship she feels for the hottest racecar driver on Earth.
J.T. Sims never forgot the beautiful wife of his long-dead best friend. She’d had her time to grieve. She’d had years to pull herself together and now it was his turn, his time to reach out for the love he’s always wanted. His mission becomes convincing the pretty Texas lady that she’s strong enough to take what he’s offering. Nights of hot passion and days filled with love.