More Than Words. Out NOW!! 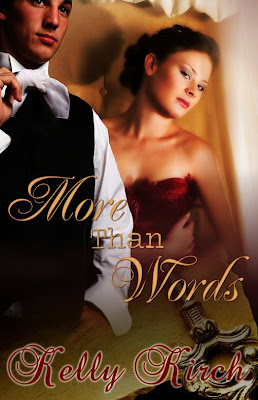 More Than Words (Historical Romance/Fantasy) Released August 4, 2008 from ResplendencePublishing.com
Kylie Dobson is a romance author with a problem. As a seat-of-the-pants writer, she depends on the strength of the characters to drive her plot. But when her hero, Milo, Lord Gafton refuses to chase after the prescribed heroine, everything goes wonky. Kylie is inexplicably sucked into her work of fiction, transported from a contemporary venue to a fictional Regency setting. What's worse is, nothing she does is affecting the plot and she can't get out.
Set into motion by her own creative process is a winter storm which seals the Regency party goers in on a country estate. If that wasn't bad enough, a murderer is on the loose and he's picking off one guest at a time. The more time she spends with Milo the more she comes to depend on him. She's convinced that his character sketch will kick in at any moment and he'll fall for her heroine. But will it happen before she loses her heart to him? And what happens when the plot draws to the end? Will the killer have his way and will Kylie solve the case only to be returned to her reality without the man she's fallen for?